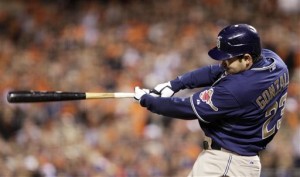 The deal was on, it was off, it was on again, but in the end, the Red Sox got their man on Sunday, trading three top prospects and a player to be named later to the Padres for first baseman Adrian Gonzalez. The deal was temporarily set back by the reported inability of the Sox to agree to a contract extension with Gonzalez, who will be a free agent at the end of the year, during the brief negotiating window allowed by Major League Baseball. At the point that the trade fell through, snarky comparisons to the Red Sox's failed trade for Alex Rodriguez abounded, although that negotiating window seemed to remain open forever, and unraveled over the union's disapproval of Scott Boras' attempt to restructure A-Rod's deal. In a matter of hours, the snarkmeisters were eating their words anyway, and the Sox had healed a wound left over from another close-but-no-cigar deal that ended up turning the Yankees' way, namely the signing of Mark Teixeira.

In Gonzalez, the aging Sox lineup — which averaged an AL-high 30.9 years in 2010 — has another cornerstone for the future. The going-on-29-year-old has hit .288/.377/.514 while averaging 32 homers a year over the last five years, all while playing half of his games in the cavernous Petco Park, where he's hit just .267/.367/.442. His arrival in Boston offsets the free agency loss of Adrian Beltre, who enjoyed a fantastic career-rejuvenating year in 2010; the Sox will shift Kevin Youkilis across the diamond to third base to accommodate Gonzalez. The move also looks towards 2012, by which point David Ortiz and J.D. Drew will likely have departed as free agents.

That is, assuming the Sox and Gonzalez actually agree to an extension. According to Fox Sports' Ken Rosenthal's report on Sunday, Gonzalez sought a six-year, $150 million extension, while the Sox countered with five years and $120 million. On a per-year basis, both figures top the average annual value of Teixeira's eight-year, $180 million deal with the Yankees; Gonzalez also could seek to exceed the five-year, $125 million extension to which the Phillies signed Ryan Howard last year, a deal which doesn't kick in until 2012. The latest word via SI.com's Jon Heyman is that the two sides have agreed to the parameters of an eight year, $167 million deal, which doesn't make any sense because it doesn't exceed the average annual value of either contracts. Early on Monday morning, the MLB Network's crawl reported seven years at an average of $23 million per year ($161 million) which when you add Gonzalez's ridiculously cheap 2011 salary of $6.2 million does adds up to Heyman's reported terms.

Keep in mind these figures are all rumors, and none of them matter except the one for which Gonzalez signs on the dotted line. And remember, when it comes to contracts, players (and their agents) like to one-up each other either on total dollars or higher average values; the guaranteed money in Derek Jeter's recent deal comes out to an average of $18 million per year, which is higher than the $16 million per year over 10 years (!) being paid to Troy Tulowitzki over the course of his remaining deal, though one can also note the Tulowitzki camp could frame it as his having received a seven-year, $134 million extension at $19.1 million per year, a rate higher than Jeter's $18.9 million per year over 10 years. Both players and their agents thus can claim some amount of bragging rights and give the next player who comes along an even higher salary target.

Supposedly, the holdup in announcing the extension is because Gonzalez is coming off labrum surgery in his right shoulder and the Sox wish to see him play in the spring before going any higher, but that's a steaming pile of horse manure; if the Sox are willing to risk even five years sight unseen, the extra years and dollars aren't a credible stumbling block. The real reason is that by delaying any news of an extension until the spring, Gonzalez's increased salary will not count against Boston's 2011 payroll for Luxury Tax purposes. That's a loophole in the Collective Bargaining Agreement which the Sox exploited last year in extending Josh Beckett's contract.

One other factor which may play a part is the crazy seven year, $126 million deal which Jayson Werth signed with the Nationals, a move which is all kinds of crazy given that the noncontending Nats just let Adam Dunn escape to the White Sox via a four-year, $56 million deal, having only offered three years and $35 million at the end of the regular season. Werth's price tag will likely raise the bar for the other two top tier free agents, Cliff Lee and Carl Crawford. The Yankees and Rangers are still pursuing Lee; the latter is reportedly unwilling to go six years on a deal, which may be the deciding factor. With the Red Sox likely out of thehunt after this Gonzalez trade, Crawford's closest pursuer is said to be the Angels. There will be plenty more to chew on with those two as the winter meetings kick off.

(As a parenthetical aside, the biggest loser on this deal may be Albert Pujols, who could reach free agency next year. With the game's two biggest spending teams both having long-term solutions locked in at first base, he'll have to hope somebody else is willing to open their checkbooks for what may be a contract to top Alex Rodriguez's.)

Back to Gonzalez. That the Red Sox would be the team to acquire him always had the air of inevitability about it given the ties between that organization and the Padres. Via former Padres owner Tom Werner and team president Larry Lucchino, now respectively Boston's executive vice presdient and team president/CEO, respectively, Sox GM Theo Epstein got his start in the San Diego front office. In turn, current Padres GM Jed Hoyer and his brand new right hand man Josh Byrnes both worked under Epstein in Boston.

Hoyer and Byrnes both know Boston's farm system, and they extracted a steep price. In pitcher Casey Kelly, first baseman Anthony Rizzo and center fielder Reymond Fuentes, the Sox are surrendering their #1, #3, and #6 top prospects according to Baseball America; the PTBNL is likely a player who's eligible for the Rule Five Draft, which will take place later this week. For more on the prospects, see my Baseball Prospectus colleague Kevin Goldstein and WEEI's Alex Speier, but the thumbnail sketch is this: Kelly, the team's top pick in 2008, converted to the mound from shortstop since being drafted, but he's still quite raw on the mound, having posted a 5.31 ERA at Double-A Portland this past season; Rizzo, a sixth-round 2007 pick, has thus far overcome a battle with Hodgkins lymphoma to hit 20 homers at the age of 20 at Portland; Fuentes was the team's top pick in 2009. Interestingly enough, when I wrote my Red Sox GM for a Day piece a few weeks back, I had him as a possible piece of the deal along with but not Kelly. That was on the advice of BP colleague Marc Normandin, who's both a Sox and Padres fan and thus somebody with a stake in an equitable hypothetical deal.

It's worth noting that the lost prospects will be offset by the four compensation picks the Sox will receive for the free agency departures of Beltre and Victor Martinez, who signed with Detroit a few weeks back, two first-rounders and two supplemental first-rounders. Furthermore, by locking up Gonzalez before he reaches free agency, they'll avoid costing themselves a first-round pick. A nice bit of maneuvering on Epstein's part.

Given that, the price of the prospects is justified, because they'll get Gonzalez's 2011 services at a rock-bottom price before paying Teixeira-type money to him over the course of the extension. And make no mistake, Gonzalez is a Teixeira-type player, a slugger with outstanding plate discipline who's also a slick fielder. Once you adjust for the caliber of park and league environments given BP's suite of statistics — Teixeira's played most of that time in hitter-friendly ballparks while Gonzalez has toiled in Petco — there's very little difference between the two. Check out their last four years, and also the age-based comparisons:

Aside from the fact that Teixeira is a switch-hitter and Gonzalez a lefty, the point of separation between the two owes primarily to Teixeira missing a month due to a quad strain in 2007 and a few more games here and there. There are additional layers of irony here as well. For one, Teixeira chased Gonzalez out of the Rangers' org; he was the team's first round pick in 2001, the fifth pick overall, and was a fixture in the Rangers' lineup from opening day 2003 until mid-2008, though he did see a bit of time at third base early in his career. Gonzalez, the overall number one pick of the 2000 draft by the Marlins, was traded to the Rangers in July 2003 in a deal for Ugueth Urbina. He played 59 games in Texas in 2004-2005, debuting in April 2004 when Teixiera was on the DL due to an oblique strain and spending some time the following year as a DH but struggling at a .227/.272/.407 clip.

The Rangers wound up trading Gonzalez to San Diego in January 2006 in a horribly lopsided deal that also cost them pitcher Chris Young; the players they received, Adam Eaton and Akinori Otsuka, didn't amount to much in Texas while Gonzlaez and Young flourished. Rangers' GM Jon Daniels, who made that deal, would go on to redeem himself in 2008 when he finally traded Teixiera to the Braves for a five-player package which included Neftali Feliz, Elvis Andrus and Jarrod Saltalamacchia, the first two of whom became vital parts of this year's AL champions.

In any event, the AL East arms race continues. From among the big three teams, it's the Red Sox, who fell short of the playoffs this past year, with the first major move to add a marquee player, though they've done so by fixing what ain't broke (their offense, which ranked second in the AL in scoring) rather than shoring up a pitching staff which was 10th in the league in run prevention. The Yankees thus far have simply maintained the status quo by re-signing Jeter and Mariano Rivera. We'll soon see if they can land bigger game.