Share All sharing options for: And Another One Gone . . . 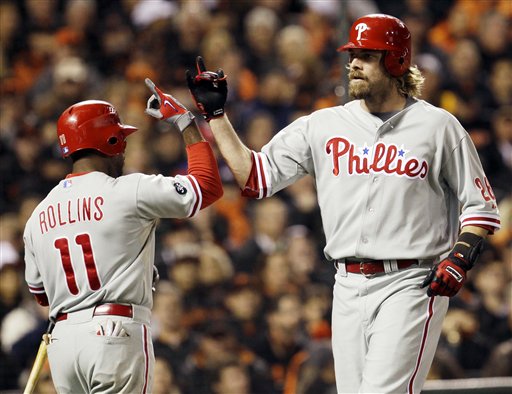 The Nationals out-sized offer has taken another big name off the market. (AP)

The dominoes are starting to fall.

With the arbitration and non-tender deadlines behind us and the winter meetings starting up in Orlando this week, the free agent market is already well on it's way toward shaking out. Mariano Rivera and Derek Jeter are once again Yankees. The shortstop picture behind Jeter has seen Juan Uribe bolt the defending World Champion Giants for the rival Dodgers, and the Giants respond by nabbing Miguel Tejada from the runner-up Padres to fill their resulting shortstop vacancy. The Padres, who also lost righty starter Jon Garland to the Dodger, who also took starters Ted Lilly and Huroki Kuroda off the market, finally pulled the trigger on an Adrian Gonzalez trade, sending the slugging first baseman to the Red Sox for a quartet of prospects headed by converted pitcher Casey Kelly.

That last move pushes Kevin Youkilis to third base and removes Boston from the Adrian Beltre sweepstakes and, given the eventual need to sign Gonzalez to a nine-figure extension (something the two sides failed to come to terms on yesterday before the trade became official, though they did put parameters in place for an eventual deal), is likely to be Boston's only big-impact move this winter. Meanwhile, Jayson Werth, perhaps realizing that the Red Sox have now made their big splash, signed a massive seven-year, $126 million dollar contract with the Nationals, who had just lost Adam Dunn to the White Sox. That deal removes one of the two biggest hitting stars on this year's market and suggests an even bigger payday to come for Carl Crawford, who is not only two years younger than Werth, but generally more highly regarded than Werth and, again, the lone remaining free agent option for teams looking to add a big-impact outfielder under the age of 35.

For those reasons, the Werth signing could have a direct impact on how the remainder of the Yankees' offseason plays out. The conventional wisdom thus far has been that, with Jeter and Rivera back in the fold, Brian Cashman will now turn his attention to the starting rotation, which he said would be his top priority this offseason. That means making every effort to sign Cliff Lee and cajole Andy Pettitte into one more season, resulting in a starting five of CC Sabathia, Lee, Pettitte, Phil Hughes, and A.J. Burnett. The catch, of course, is that Pettitte will make up his own mind and could go either way (though I do expect him to return), and Lee is rumored to be looking for a contract similar to Sabathia's seven year, $161 million deal despite the fact that he's four years older than Sabathia was when the Yankees gave him that record-breaking pitching contract.

The big problem for the Yankees is that their Plan-B should they not land Lee, either because the pitcher decides to stick with the Rangers or they simply refuse to pay his price, has reportedly been to redirect that money toward Crawford then use their outfield surplus to trade for a starting pitcher, but given the size of Werth's contract, which reportedly was completely out of proportion with the other offers Werth had received, as well as Werth's simple absence from the market, make it likely that Crawford's demands will prove to be even more absurd than Lee's. That means both Plan-A and Plan-B for the Yankees involve a major commitment in dollars and years which, in either case, could backfire significantly.

For that reason, I think the Yankees should strike Crawford from their list immediately. Not only don't they have a particularly pressing need for an outfielder, but they have absolutely zero need for a 29-year-old left fielder with a career .337 on-base percentage and .444 career slugging percentage whose primary skill is his speed, which will start to fade early in his new contract. That such a player is likely looking for an eight-year commitment with an annual average north of $20 million should make him as undesirable as a repeat engagement with Carl Pavano, who is rather clearly the best starting pitcher remaining on the market after Lee and Pettitte.

Of course, the Yankees won't want to make their disinterest known, because it could drop Crawford's price for his eventual employer, most likely the Angels, who have a history of overspending on speedy outfielders with middling bats, and because it will reveal their remaining plans to be Cliff Lee Or Bust, which means Lee very well could get Sabathia money despite the fact that he'll be 33 before the end of his first year in pinstripes and has had a handful of minor injuries in the past few seasons, including an abdominal strain that cost him the first month of the 2010 season. Whatever happens, it now seems likely that it's going to happen quickly. Crawford, Lee, and Beltre are the major players remaining on the free agent market, and each could find a home well in advance of Christmas, which is less than 20 shopping days away.