Derek Jeter Re-Signs: Will There Ever Be Another Party?

Share All sharing options for: Derek Jeter Re-Signs: Will There Ever Be Another Party? 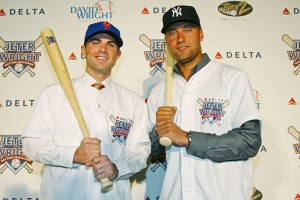 Derek Jeter and David Wright: A year from now, only one of these players will still be a star... Or will he? (AP)

The Yankees have re-signed Derek Jeter for three years, and possibly four, pending a physical. They get the privilege of rewarding that sizable chunk of the fanbase that would rather see a name than watch the team win, or hasn’t yet figured out that the name and winning might be incompatible; they get to enjoy the publicity attendant on Jeter’s 3,000th hit; they get to see if a shortstop can provide value at ages 37 through 39, something that few of that ilk have done before. We’ve been over this before, but they’re worth revisiting: the list of shortstops who have had good offensive seasons at this age is limited to Honus Wagner and Luke Appling. Perhaps some other shortstops could still hit well for the position—the older Cal Ripken, for example—but they had decayed defensively to the point that they had to be moved. The Yankees are very much in territory that all but two other teams in history have chosen not to explore, because it just wasn’t worth it.

Here is a question I would like to know the answer to, but never can: say Jeter had not missed 43 games in 2003, or had hit for a slightly higher average in 2002 and 2008, or done any number of other things differently, and finished 2010 already having reached 3000 hits. Would the Yankees have taken an even harder position? Would they have bothered at all, or might they have given Jeter the Bernie Williams brush-off?

I imagine that they still would have engaged with Jeter, given that the shortstop market is such that without the Captain they might have ended up with some combination of Eduardo Nunez, Ramiro Pena, with maybe some Ryan Theriot-type veteran mixing in on occasion. Jeter is still—probably—superior to those kinds of players. In another year, that might not be the case, and the Yankees will have an expensive and embarrassing problem on their hands.

On the same day that the Yankees re-upped America’s most visible declining asset (insert your political gag here—I’m keeping mine private, but you can guess what I’m thinking), the Red Sox took the first step towards acquiring super-masher Adrian Gonzalez from the San Diego Padres. A-Gonz is a career .315/.402/.578 hitter away from Petco, and in Fenway he could be even more of a force to be reckoned with. It stands to reason that the Sox are not done—Gonzalez completes what should be a strong offensive infield with Dustin Pedroia, Jed Lowrie, and Kevin Youkilis, but he doesn’t do anything for their catching deficiencies or weak outfield corners. Jayson Werth or Carl Crawford may be coming to Beantown.

The future is about getting better, not rewarding old pals for past performance.