Russell Martin and the Midnight Massacre

Share All sharing options for: Russell Martin and the Midnight Massacre 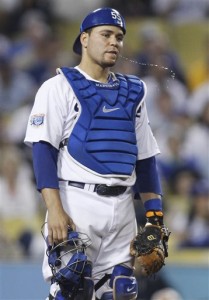 Prior to the non-tender deadline, Russell Martin came within spitting distance of becoming a Yankee (AP).

The stroke of midnight on Thursday night/Friday morning was an important deadline in the baseball industry. By that point, teams had to decide whether or not to offer contracts to the players under club control, which is to say those with less than six years of service who aren't already signed to a multi-year deal. While in most cases this is a mere formality, it's most notable for who's not tendered a contract; hence, it's generally referred to as the non-tender deadline.

According to the MLB Trade Rumors tracker, 50 players were non-tendered, a list that includes the Yankees' Alfredo Aceves and Dustin Moseley as well as several ex-Yankees: Dioner Navarro, Wil Nieves, Jose Veras, and Chien-Ming Wang. Other recognizable names include the A's Jack Cust, the Pirates' Lastings Milledge, the Red Sox's Hideki Okajima, the Rays' J.P. Howell, and the White Sox' Bobby Jenks. With so many familiar names parting from their teams under similar tales of heartbreak and disappointment, the emerging news at that hour felt like a midnight massacre.

By far the most interesting name on the list — the one which had its teams fans hanging on right to the stroke of midnight, watching the Twitscape for any scrap of information as though they were waiting for smoke from the Vatican — was Dodger catcher Russell Martin, who was ultimately non-tendered. Just a few years ago, Martin was one of the brightest young stars in the National League, an energetic two-way backstop with the potential to become the face of the Dodgers' franchise amid a bumper crop of homegrown regulars. To be their Derek Jeter, in essence. Alas, he's declined sharply over the past few seasons:

While the dissipation of his power is disturbing, Martin's high on-base percentage still makes him a roughly league-average hitter according to Baseball Prospectus' True Average, and a few points ahead of the average catcher. Despite some criticism of his receiving skills, his defense grades out as well above average according to BP's metrics; he's been +10 runs per 100 games behind the plate, and threw out 39 percent of base thieves last year. He's got real value when he's healthy.

Which he may not be. Martin's disappointing 2010 showing is amplified by the fact that he played in just 97 games; his season ended in early August when he injured his hip by stumbling after not sliding into home plate. Initial reports said he'd torn his hip labrum and would need surgery. He avoided the knife, but only relatively recently did his agent clarify that the injury was actually a hairline fracture in his hip — less serious, since bones heal more predictably than soft tissue. While the prognosis called for him to be ready for spring training, Martin has yet to resume baseball activity. At last report, he was running on a low-impact treadmill, unable to bear his full weight.

Overuse may have played a part in Martin's decline. From 2007 through 2009, under the management of Grady Little and Joe Torre, two ex-catchers who should have known better, he caught more innings than any other major league catcher, edging Jason Kendall, 3,693 to 3,636.* In 2008, Torre occasionally played Martin at third base, his original position before converting in 2003, during what should have been his days off. Mentioning him in the same breath as Kendall is alarming in and of itself, because that overworked backstop became as punchless as a 97-year-old grandmother after years of being overworked.

Furthermore, Martin's conditioning has been, to say the least, questionable. He reportedly spent the winter of 2008-2009 using yoga to improve his flexibility. When his power dissipated the following season, he bulked up, arriving at spring training tipping the scales at 231 pounds, 25 heavier than the year before, but it didn't restore his power. Meanwhile, amid whispers that he was enjoying the Los Angeles nightlife a bit too much, Martin admitted in the spring of 2009 that his drinking was affecting his game:

"I was having a couple drinks to help me go to bed at night, and it became a vicious cycle," he says. "This whole L.A. thing, well, you've got young guys like Clayton Kershaw, and it's like they're immune to it. But I wasn't one of those guys.

"I liked having a good time when I was a kid, and now that I'm 26, I was having a good time, but I wasn't recovering like I'd like to recover. I thought going out with the guys, listening to music and having a few drinks -- that was fine for me.

"I thought I could tell myself, 'I'm feeling pretty good,' and everything will be OK when I get to the yard even though I was really feeling banged up. I was lying to myself."

"I let my ego get the best of me at times," he says, explaining why he was still telling everyone he wasn't worn down. "I was giving everything I had in every game, but after the game I needed to depress and go out. That's how I handled it, and as the season went on, I just didn't have the energy."

Under the terms of the Collective Bargaining Agreement between the players and the owners, the maximum amount a team can cut a club-controlled player's salary without risking losing their rights to him is 20 percent. Particularly if he's in the arbitration stage of his career, where his salary can increase sharply from year to year, a player coming off injury or an unproductive season may not be worth that price, which is what drives a lot of the non-tender cases. A team can re-sign a player after non-tendering him, but he's a free agent, able to negotiate with every team, and he won't bring back any compensation in the form of draft picks. Not surprisingly, the process is capable of creating bad blood, so many non-tenders won't even consider re-signing with the team that jilted them.

Martin is in his third year of arbitration eligibility, having earned $5.05 million last year. Given his overall history as a two-time All-Star with a Gold Glove and a Silver Slugger to his credit, the Dodgers feared he could win an arbitration hearing and earn around $7 million. With his health in question, they were loath to guarantee that much salary; they attempted to negotiate a contract which reportedly would have been worth $4.2 million in guaranteed money, with incentive bonuses to bring him to between $5-6 mil. Martin's camp countered with a $5 million guarantee plus incentives, so the two sides were less than $1 million apart in guaranteed money, but essentially on the same page. Scuttlebutt from ESPN's Jayson Stark says that he may have had deal lined up with another team, which would violate baseball's tampering rules.

Amid the negotiations, the Dodgers tried to trade Martin, and according to the New York Times' Michael S. Schmidt, they were close enough to swapping him to the Yankees for — wait for it — Frankie Cervelli. Schmidt says the two sides went so far as to exchange medical records, though the question has been raised as to whether the Yankees had time to review them. Since the Yankees would have been obliged to tender a contract under the same conditions as the Dodgers — agree to a dollar amount, or head to arbitration — there's also the possibility that the two sides failed to see eye-to-eye on an appropriate amount of cash to include in the deal to balance out the difference in the two catchers' salaries.

For the Dodgers, it's a tremendously sad day to see such a promising homegrown player reach the point of parting ways, though the team is reportedly still interested in him, likely in a job-sharing role which could include time at other positions. As a lifelong fan of the boys in blue and particularly of Martin in his brief heyday, I'm angered that circumstances brought this about, particularly with the organization lacking a capable in-house successor. To carve out space for Martin, they traded the aforementioned Navarro in 2006, and sent Carlos Santana to Cleveland for Casey Blake in 2008, only to see Santana — another positional convert who was still learning the ropes when traded — emerge as one of the game's top prospects at any position; BP's Kevin Goldstein ranked him eighth coming into the year, and Santana went on to hit .260/.401/.467 in an injury-abbreviated season. Add to it the fact that the changing of the managerial guard from the aged and possibly out-of-touch Torre to the younger and more earnest Don Mattingly had the promise of providing many young Dodgers on the downslope with a much-needed kick in the pants, and Martin's loss is all the more troubling.

As an analyst, however, I can certainly understand the non-tender from the Dodgers' point of view, and I can also see why he would appeal to the Yankees, who don't know if Jesus Montero will be ready defensively and certainly have reasons to transition Jorge Posada to the DH role in light of his age and defensive decline. Cervelli simply isn't a capable enough player to bridge the gap, while Martin would be, at least if he were healthy. At the cost of a tendered contract, he'd be a pricey reserve, given that about $3 million a year would have bought you the services of the capable Yorvit Torrealba or Ramon Hernandez on the open market. Even given the Dodgers' final offer, Martin's likely to cost more than those players, and while his upside is higher, so is the risk, and therefore the fit isn't ideal for him to wind up in pinstripes. We'll see in the coming days whether he remains an option; you can bet I'll be watching.

*Updated to correct errors in an earlier version which mistakenly asserted Joe Torre managed the Dodgers in 2007.