Share All sharing options for: Puma in Purple? Puh-leeze! 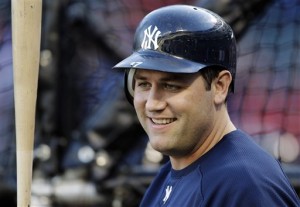 Ex-Yankee Lance Berkman has multiple teams pursuing him as a free agent, but it's difficult to see how he'd fit in Colorado (AP).

Parsing rumors is at least half the fun of the Hot Stove season. Figuring out not only whether a deal makes sense but how it would affect the parties involved, and who might be motivated to spread "news" of such a connection between buyer and seller may not match the excitement of a tense late-inning staredown between a heat-throwing reliever and a slugger during a playoff game, but with a chill in the air and no games on the calendar, it's all we've got. Once in awhile, a rumor comes down the turnpike that you can't make heads or tails of, even when you tilt your head sideways and squint, or make like the cartoon drunk, checking the bottle of hooch you've been nipping at before tossing it aside. Such was the case with a rumor which circulated yesterday linking Lance Berkman to the Rockies.

Recall that the 34-year-old spent the last two months of the season with the Yankees after arriving via a trading deadline deal from Houston.

As a quid pro quo for Berkman waiving his no-trade clause, the Yankees declined his option so he could test the free agent market, a somewhat risky choice given that he was in the midst of his worst major league season. Here's what I wrote back during the ALCS, when Berkman was forced into a more prominent role following Mark Teixeira's season-ending injury:

Once upon a time, Berkman ranked among the best hitters in the National League, a possessor of ideal amounts of power and patience that made him a perennial mid-lineup threat. From 2000 through 2009, he bopped 309 home runs for the Astros — the ninth-highest total during that stretch — while hitting .300/.413/.559 and making five All-Star appearances. He scored 100 or more runs five times, drove in 100 or more six times, and ranked in the NL’s top 10 in on-base percentage nine times during that 10 year stretch, adding four such leaderboard appearances in both batting average and slugging percentage. He was fairly durable too, averaging 147 games a year during that span, with a knee surgery (left) that cost him the first five weeks of the 2005 season his only major absence.

Alas, that left knee has become something of the bane of Berkman’s existence. Back in March, he underwent surgery to remove loose cartilage in the knee, and Baseball Prospectus injury expert Will Carroll reported a pattern of symptoms consistent with arthritic changes in the joint — bad news for a guy in the final guaranteed year of his contract, if nothing else. Berkman began the season on the disabled list, didn’t play until April 20, and hit just .175/.288/.333 over the course of his first 30 games. His bat gradually came around, but he still showed considerably less power than before, and his performance against lefties cratered.

With the Astros facing a long-overdue need to rebuild, they finally unloaded Berkman and Roy Oswalt, their two biggest stars, around the trading deadline. Oswalt joined Roy Halladay and Cole Hamels to form one of the game’s most formidable rotation fronts; not for nothing are the Phillies still playing ball this postseason. Berkman became a platoon DH in pinstripes, getting just 20 plate appearances against lefties and hitting a fairly slaptacular .284/.388/.386 against righties. His bat showed a bit more life in September after he returned from missing the second half of August due to an ankle sprain, but he collected just one home run during his regular season stint with the Yanks, and started just 29 of their 59 games after being acquired.

Anyway, according to Fox's Ken Rosenthal, renowned as the most credible of the high-volume rumor-mongerers, Berkman has drawn interest from eight teams, a group that includes the A's, Cubs, Rockies, Cardinals, Pirates, and Blue Jays. The obvious move for a declining ex-slugger with knee problems would be to shoot for a job in the AL, where he could DH most of the time, but Berkman says he's not ready to accept such a role yet. "A lot of people have asked me, 'Do you still want to play the field?’" he told Rosenthal. "My answer is that not only can I play the field, I still can run around the outfield. I’m not a DH-slash-first baseman. I'm a first baseman-slash-outfielder."

That might be a generous self-assessment of his abilities at this stage, either for marketing purposes or because, like Derek Jeter, Berkman's loath to accept the notion that he's something less than the star player he was a few years ago. You'd have to go back to 2004 to find a season where he played more outfield than first base, and to 2007 to find one when he saw any time in the outfield. Yet for at least some of the teams with at least some interest in him, an ability to play the outfield would be key. The Cardinals have a guy named Pujols who probably isn't going anywhere this winter, for one.

The Rockies would appear to fit that category as well, so it was more than a little surprising when the Denver Post's Troy Renck tweeted that he heard the Rox were "getting close" on Berkman. It's been a big week for spending money in Colorado, where the team announced not only that they have retained Jorge de la Rosa via a two-year, $21.5 million deal plus a player option, but that they've granted a monstrous extension to Troy Tulowitzki which keeps him under contract for the next 10 years at a princely sum of $157.5 million.

The perils of that long-term deal are a story for another day, but suffice it to say that the Rockies have a horrible track record for granting $100 million-plus contracts, having been burned by Mike Hampton's eight-year, $121 million deal and Todd Helton's nine-year, $141.5 million deal. Hampton lasted two years in Colorado, putting up a 5.75 ERA before being traded to the Marlins and then the Braves, with the Rox eating $49 million; it was on the Braves' watch that he broke down, making just 25 starts over the final four years of his deal and missing the entire 2006 and 2007 seasons. Helton started falling apart in 2008, the sixth year of his deal, and over the last three seasons has hit .288/.392/.425, which doesn't go very far in Colorado; worse, he's averaged just 117 games a year over the last three years while making $16.6 million a year. Still worse, coming off a .256/.362/.367 showing in 2010, Helton will earn a whopping $19.1 million in 2011, though by terms of an extension which runs through 2013, most of that money is now deferred into his golden years, and the immediate payout is closer to $10.6 mil.

Helton's presence at first base would appear to be one obstacle to Berkman signing with Colorado, even though by now it's clear he needs a caddy. Last year, that honor went to old friend Jason Giambi, who at the age of 39 willingly accepted a secondary role and hit .244/.378/.398 in 222 plate appearances while making 35 starts at first base, pinch-hitting 44 times, and DHing eight times in interleague play. That would appear to be one wedge of the playing time pie available to Berkman.

The other would presumably be in left field, but the Rockies are awash in playable outfielders under club control and thus relatively inexpensive; Carlos Gonzalez, Dexter Fowler and Seth Smith aren't even arbitration eligible yet, and Ryan Spilborghs is signed for less than $2 million. Gonzalez and Smith are lefties — as is Berkman, effectively — and Fowler is a switch-hitter. Granted, not all of them are coming off strong seasons, and here it's worth noting that Rockies manager Jim Tracy, as enamored with his own genius as any manager in recent memory, used 23 different outfield combos all season, including some which included Jay Payton and Melvin Mora, who by definition are answers to the wrong question asked. By futzing around too much with his outfield, his middle infield and his bullpen, Tracy managed the division's most talented team right out of a three-way race, but I digress. Gonzales finished third in the NL MVP voting while seeing ample time at all three outfield spots, while Smith and Spilborgs, who play the corners, dipped from their 2009 numbers. All can move around the large Coors Field outfield with far more ease than Berkman could, and again, on a team that's got reason to be cost-conscious, all are dirt cheap.

According to SI.com's Jon Heyman, Berkman is seeking about $8-10 million dollars for his services in 2010. Rosenthal reports that the Rox offer for Berkman was too low, and elsewhere, touts the Cubs as a reasonable landing spot, while ESPN's Buster Olney says the A's are "enthustiastic" [sic] in targeting Berkman. So it would appear that the "getting close" part of the Berkman/Colorado rumor is an overstatement, perhaps a plant by the Berkman camp to add a sense of urgency to other teams' pursuits of him. That's the way the game is played at this time of year, and while there's nothing at stake for the Yankees — who didn't offer arbitration to Berkman either, on the fear he might actually accept and lock in an eight-figure salary — it's certainly more interesting than following the glacial pace of the Derek Jeter and Cliff Lee negotiations. So pull up a chair, grab a handful of popcorn, and follow along.