Catching Up: Two Arms, Two Ows, and a Sigh

Share All sharing options for: Catching Up: Two Arms, Two Ows, and a Sigh 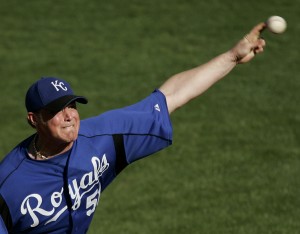 Having landed the elusive Sisquatch the Yankees are now talking to Nessy's agent. (AP)

Tuesday's deadline for free agents to accept or decline arbitration from their former clubs had little impact on the Yankees. The only player to whom they offered arbitration, Javier Vazquez, signed with another team that same day, and of the players offered arbitration by the other 29 teams, only righty relievers Frank Francisco of the Rangers and Jason Frasor of the Blue Jays accepted.

Today is the deadline for teams to tender contracts to their team-controlled players, better known as the non-tender deadline because the real news is when a team doesn't tender a contract. Prior to today, the Padres non-tendered outfielders Scott Hairston and Tony Gwynn Jr., and the Mariners non-tendered infielder Jose Lopez, though there are sure to be many names to add to that list by midnight tonight.

The Yankees' don't really have any non-tender candidates, as such players are typically in their arbitration years and making seven-figure salaries their performance on the field simply doesn't justify. The closest Yankee to that description was Sergio Mitre, who made $850,000 in 2010 and was eligible for arbitration for the third and final time this winter, but the Yankees re-signed him yesterday for $900,000 with some $200,000 worth of bonus clauses.

I don't much see the point in retaining Mitre. In his two seasons as a Yankee he has allowed 17 home runs in 105 2/3 innings (1.4 HR/9IP) while striking out just 5.2 men per nine. His ERA and WHIP looked nice this year (3.33 and 1.09, respectively), but there was a .228 batting average on balls in play lurking behind those numbers, which, in combination with those poor home run and strikeout rates, tells us that Mitre was more lucky than good. He also missed nearly two months mid-season after straining an oblique while taking batting practice in anticipation of interleague play, an absurd injury given the limited likelihood and importance of a Mitre at-bat during the Yankees' nine games in National League parks.

Mitre will be 30 in February, and it's unclear to me what advantage he offers beyond what someone like minor league veteran Romulo Sanchez, who has also both started and relieved, could do. Sanchez walks more batters, but he also strikes more out, gives up fewer homers, and is three years younger and about half the cost.

With Chad Gaudin having elected to become a free agent after being outrighted to the minors a month ago, the Yankees have just one more retread swingman to settle up with, that being Dustin Moseley. Moseley is arbitration eligible for the first time this winter and out of options. Hopefully the combination will give the team incentive to non-tender him, though even if they don't there's a very good chance he will be designated for assignment at some point this season.

In other relief pitching news, the Yankees signed two pitchers to minor league contracts with non-roster invitations to spring training on Monday. I don't necessarily expect much from either man, but they are compelling additions.

The first is 6-foot-10, 270-pound Andy Sisco, a hard-throwing left-hander who can make CC Sabathia look small. "Sisquatch" was swiped from the Cubs by the Royals in the 2004 Rule 5 draft and turned in a solid season of set-up work as a 22-year-old rookie in 2005, but that season interrupted his development and that caught up with him in his miserable sophomore year. The White Sox tried to fix him in 2007, having acquired him for Ross Gload, but with no success, and April 2008 Tommy John surgery froze things there. He returned to action with the Giants' Double-A team last year and showed his old velocity but also his old wildness and posted a 4.32 ERA as a 27-year-old former major leaguer in Double-A. That's not promising, but it's hard to blame the Yankees for wanting to take a look at a pitcher who fits his description.

The other pitcher is actually former White Sox center field prospect Brian Anderson. After the White Sox won the World Series in 2005, they traded Aaron Rowand to the Phillies to make room for Anderson in center, but the former first-round pick never did figure out major league pitching. After hitting .225/.288/.364 in parts of five seasons for the Pale Hose, he was sent to the Crimson kind for Mark Kotsay to serve as a late-season defensive replacement. This year, he signed with Royals as a free agent and was put on the Tony Peña Jr. plan. Anderson only threw 17 1/3 innings in actual game action in his first season as a full-time pitcher, and 10 1/3 of them came in the low minors, but he struck out 17 men against five walks and no homers in those innings and acquitted himself well in six Triple-A outings, five of which were scoreless and three of which were perfect, in the hitting-friendly Pacific Coast League. He'll be 29 in March and is really a completely unknown quantity as a pitcher right now, but his fastball sits in the mid-90s and can hit 97 and he compliments that heat with an average slider and good control. He's certainly worth sticking in the Triple-A pen on the off chance that there's something there, even if that something just turns out to be a solid throw-in for a deadline trade.

Finally, a couple of items popped up on the Yankees' injury ticker yesterday. Brett Gardner will have surgery on Tuesday to correct the tendonitis in his right wrist stemming from when Clayton Kershaw hit him with a pitch on June 27. Gardner was hitting .321/.401/.418 when Kershaw's pitch hit him; he hit just .232/.363/.340 thereafter. He is expected to be ready for Spring Training. Alfredo Aceves, meanwhile, underwent surgery this past Tuesday to repair a broken left collar bone he suffered in a bike accident in his native Mexico. The good news is that it was the right-hander's left clavical and that the rest and rehab requires should be additionally beneficial for the herniated disk that cost him most of the 2010 season. The bad news is that that rest and rehab will delay the start of his 2011 season, though by exactly how much seems to be in dispute. Some reports have him out three months, which would give him a month of spring training to get ready for the season. Others say he will require six weeks of rest then three months of rehab, which means he won't be done with his rehab until early April.

The fact that Aceves required surgery indicates to me that this was a bad, possibly complex break. I broke my collar bone in the early spring of 1990, but it was a clean break that healed essentially on its own in a few months and didn't bother me at all when I began practicing with my high school football team that summer. Nor has it since despite the fact that my right shoulder is now an inch or two lower than my left (I call it my Don Mattingly shoulder). I'd like to think the news on Aceves influenced the Yankees decision to re-up Mitre, but it's more likely they were going to do that anyway.