Plan-C is the new Plan-B

Share All sharing options for: Plan-C is the new Plan-B 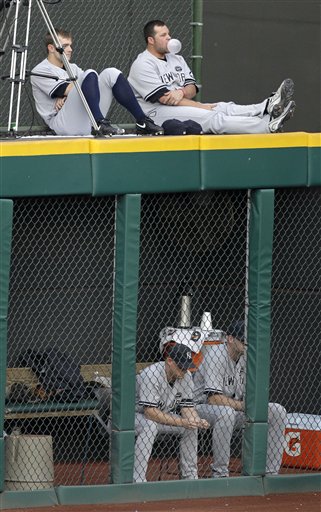 Nagging thought in Brian Cashman's head: "I know I had a top rotation prospect around here somewhere. Now, where did I put him?" (AP)

Life is what happens to you while you're busy making other plans. So sang John Lennon. Indeed, while the Yankees have been busy preparing a contract offer for Cliff Lee and waiting for Andy Pettitte to announce his intentions for next season, all of the viable alternative starting pitching options from among this offseason's free agent crop have signed with other teams.

Back on November 11, I identified four pitchers who, in my opinion, were the only other starters on the market worth considering for the Yankees' 2011 rotation. With the Rockies re-inking Jorge De La Rosa yesterday, all are now off the market. Here are those four with the terms of their new contracts:

The Dodgers not only re-signed Kuroda, who clearly took a lesser deal than he could have landed on the open market to stay in a comfortable situation, and signed Garland away from the division rival Padres for almost nothing, but also kept former Yankee lefty Ted Lilly, who would have been the fifth name on my list, from even reaching free agency by extending him for three years and $33 million prior to the World Series.

With those five off the market, the best available staring pitcher other than Lee or Pettitte is Carl Pavano. With his bridge to the Yankees already burned, the Yankees' next option would be someone from a group comprised of Vicente Padilla, Kevin Millwood, Aaron Harang, Hisanori Takahashi, David Bush, and Doug Davis. Takahashi should interest the Yankees as a left-handed relief option who could start if needed, but not as a full-time starter. The others shouldn't interest the Yankees at all.

Just to deal with each quickly . . . Vicente Padilla posted a 93 ERA+ in four years with the Rangers (in a hitter-friendly park in the American League), hasn't made 30 starts in a season since 2006, posted a 94 ERA+ in 16 starts for the Dodgers (in a pitcher-friendly park in the National League) this year at age 32, and had his season ended early by a bulging disk in his neck, that after missing two months early in the season due to a radial nerve problem in his pitching arm. Kevin Millwood posted a 95 ERA+ over the last four seasons with Texas and Baltimore, posing a sub-90 ERA+ in three of those seasons. He'll turn 36 on Christmas Eve. Aaron Harang hasn't made 30 starts since 2007 and has seen his workload shrink in each of the last four seasons due to nagging injuries. He has posted a 90 ERA+ over the last three years, didn't make the Reds' postseason roster this year, and will be 33 in May. Takahashi posted a 5.01 ERA in 12 starts for the Mets in his Stateside debut this year. David Bush has posted an ERA+ of 85 over the last four years and has surpassed 190 innings pitched just once in his career. He just turned 31. Doug Davis was a solid league-average innings eater for most of the last decade (108 ERA+ from 2001 to 2009 and an average of 196 innings per season from 2004 to 2009), but he has faced serious health problems in recent years. Thyroid cancer interrupted his 2008 season, and pericarditis (inflammation in the membrane around his heart) and elbow tendonitis limited him to eight starts in 2010. He's 35.

Like one of the last survivors at the Alamo, Jay Jaffe has been bravely keeping the fight for Joba Chamberlain to return to the rotation alive despite the Yankees having already declared that equine extinct, but looking at what are now the alternatives, it seems clear to me that, should the Yankees fail to sign both Lee and Pettitte, Chamberlain is clearly their best Plan-B option barring a significant trade. If I had any fight left in me on the subject, I'd point out that that's not necessarily a bad thing, but as it stands, I do expect both Lee and Pettitte to be in the Yankee rotation come April, making the Chamberlain option doubly moot. Still, without a viable outside alternative, the Yankees will now have to negotiate with Lee and Pettitte without a net or much leverage.