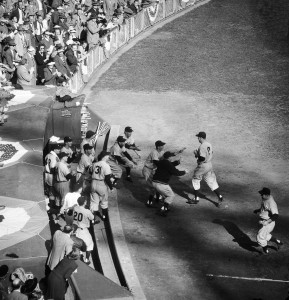 The Yankees welcome Gil McDougald back to the dugout after his grand slam in Game 5 of the 1951 World Series. (AP)

Joe Torre’s early Yankees teams had special talent in unusual places. Tino Martinez was just okay given the other first basemen of the time, the third basemen were usually not big contributors, and left field was generally a mash-up of guys like Rickey Ledee and Chad Curtis. What allowed the Yankees to have great offense after great offense was their strength up the middle. Jorge Posada, the catcher; Derek Jeter, the shortstop; Bernie Williams, the center fielder. Second basemen came and went, but some of them, like Chuck Knoblauch in 1999 or Alfonso Soriano in 2002 and 2003, made their position an unusual asset as well.

Casey Stengel’s Yankees of the 1950s were a lot like that. The third basemen were not sluggers. First base was always a soft spot until Bill Skowron came along. However, the Yankees got great production out of their catcher, a little guy named Yogi, the center fielder, known as the Commerce Comet, and, at second base and sometimes at shortstop when he wasn’t playing third, Gil McDougald. McDougald, who passed away yesterday at the age of 82, was the secret weapon of the Yankees dynasty.

McDougald was a highly unusual defensive player. He was a second baseman in the minor leagues, and an excellent one. It turned out he was an excellent shortstop and third baseman as well. During the dynasty years, the Yankees had a tremendous farm system, but they couldn’t always produce everything they needed. In 1951, McDougald’s rookie year, the Yankees had an excellent defensive second baseman in Jerry Coleman, but Coleman tended to get hurt or sick and he wasn’t such a good hitter that you wanted to play him 154 games, so Stengel spotted him there. Third base was a platoon of Bobby Brown and Billy Johnson to begin the year, but Stengel distrusted both defensively. Johnson was dealt early in the season and Brown needed a platoon partner, so Stengel spotted him at third. In this way, McDougald got into 131 games, hit .306/.396/.488, and won the Rookie of the Year award. He also picked up 63 points in the MVP balloting, finishing ninth—ahead of six Hall of Famers who also received votes, including Ted Williams, who hit .318/.464/.556 with 30 home runs.

One of the reasons that McDougald moved around the infield so much is that Stengel platooned him, not on offense but on defense. If a left-hander was on the mound, he put McDougald at third and Coleman or Billy Martin at second base. If a right-hander was pitching, McDougald would play second and Stengel would move his weaker glove to third.

McDougald’s rookie year set the pattern for his career. If the Yankees had a hole in the infield, that’s where McDougald played. The real revelation was that he was an excellent shortstop; in the short period between the decline of Phil Rizzuto and the arrival of Tony Kubek, McDougald was able to preserve the Yankees’ advantage at the position. In 1956 and 1957 he was easily one of the five or 10 best players in the American League. In the former season, he hit .311/.405/.443, in the latter, he hit .289/.362/.442. He was a top-10 finisher in the MVP balloting both seasons. In 1957, Mickey Mantle received six first-place votes in winning the award. McDougald had four.

I’ll spare you a recapitulation of all the stuff you’ve probably heard about McDougald over the years, the unorthodox batting stance he carried into the majors—the big years in ’56 and ’57 came after Stengel insisted he switch, the incident with Herb Score, the deafness that resulted from being hit by Bob Cerv in batting practice, and how he retired rather than go to an expansion team. I would like to note that as a right-handed hitter, Yankee Stadium was very hard on him. As you know, the pre-renovation ballpark required a ball to go through a TSA screening and hop a jet to get out in left field. In 10 seasons with the Yankees, McDougald hit only .255/.333/.348 with 29 home runs at home, but .296/.379/.469 with 83 home runs on the road. He was a career .306/.373/.453 hitter at Fenway Park, and had he played with the Red Sox, it is likely he would have won an MVP award or two, hitting like Derek Jeter while playing a key defensive position with excellence.

I don’t think you can emphasize enough that McDougald was one of those players who enabled Stengel to be a genius. Stengel had the insight to move him around the diamond, but McDougald had the insight to understand and adapt. He took it as a challenge, telling author Dom Fokker, "I was more confident at second base, but I realized I wouldn’t be in the lineup if I didn’t switch. I was always fairly confident in my hitting, so I said, ‘What the hell, if you make an error, so what.’ Basically, I felt if they’d give me a chance, I would prove I could play." As a result, he became the guy Stengel used everyday so he could make weaker players part-timers. Stengel didn’t have to use a Ramiro Pena to patch over for injuries or slumps because he could call on a star, the kind of player who could, and did, hit a grand slam in the World Series.

The only fault you can find with McDougald is that he declined early. He changed his stroke in response to the Score incident and a few others like it that followed in close succession. Score was hurt on May 7, 1957. McDougald kept hitting for about a week after that, but soon changed his stroke, reluctant to hit the ball up the middle. On May 12, he was hitting .333/.387/.500. He batted .281/.359/.431 the rest of the way, still very good for an infielder of the time, but not quite of the same quality as the previous year. He would never hit even that well again, batting just .253/.324/.374 over the three seasons remaining to him. He was 29 when Score got hurt, 32 when he retired.

When Stengel asked McDougald to play third for the first time, the infielder initially demurred. "Nope, that’s not for me. I’d get lost over there," he said.

"Well, move over there and try fielding and throwing a few," Stengel replied. "If you get lost, I’ll call the police."

Stengel never did need to call the cops to find his secret weapon. He was there on the field from then on, in five All-Star Games and eight World Series. Rest in Peace, Gil McDougald, under-recognized great of the game.