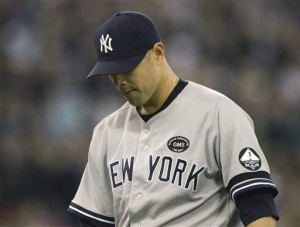 By season's end, Javier Vazquez had few reasons to keep his chin up (AP).

The Hot Stove is on a slow burn at the moment, at least in the Bronx, where the Yankees' pursuit of Cliff Lee is in a holding pattern while the team engages in a staredown with Derek Jeter. Meanwhile, the market for starting pitching beyond Lee continued to dwindle over the weekend. Jon Garland gave the Dodgers a hometown discount to return to the Los Angeles area on a one-year, $5 million deal with a vesting option, and Javier Vazquez became an ex-Yankee yet again by agreeing to a one-year deal, $7 million deal with the Marlins.

Interestingly, Vazquez didn't take the most lucrative deal available. He reportedly had three offers on the table, including one for two years about $20 million, with the Nationals, Cubs and Rockies known to be interested suitors as well. He was more concerned about location, preferring to return to the National League and to remain close to his native Puerto Rico. His hope is that he'll rebound from a lousy year and set himself up for a better multiyear deal next year.

Vazquez was no less enigmatic or frustrating during his second tour of duty with the Yankees than he was in the first. He pitched fewer innings (157.1) than in any season since 1999, his second year in the majors, yet he ranked second in the AL with 32 homers allowed. His 5.32 ERA was his highest since his 1998 rookie season, and higher than all but five of the 102 other pitchers with at least 150 innings last year. Relative to his stellar 2009 season in Atlanta, his strikeout rate dipped by nearly three Ks per nine (9.8 to 6.9) and his walk rate more than doubled (1.8 to 3.7), as did his homer rate (0.8 to 1.8). Pulled from the rotation in early May with a 9.78 ERA, he did find a groove, with a 3.39 ERA and 10 quality starts out of 15, but after August 6, he went through a dead arm period and was so bad that he lasted five innings in just one of his final eight starts, and wound up not only pitching out of the bullpen — where he made a career-high five relief appearances — but being left off the postseason roster entirely.

The primary problem for Vazquez was a loss of velocity borne of mechanical woes. As Fanhouse's Frankie Piliere noted back in May, Vazquez wasn't driving over the top of his front leg to get on top of his pitches, instead rotating around his torso and shoulder, which cost him velocity, movement and command. His average fastball speed fell from 91.1 MPH in 2009 to 88.7 last year, a massive drop*. His percentage of swinging strikes dove from 12.3 percent in 2009 to 8.5 percent, well below his career mark of 11.3 percent, and a similar thing happened to his groundball-to-flyball ratio; it finished at a career low 0.76, down from 1.20 in 2009 and well below his career mark of 0.96 — suggesting he was leaving his pitches up more often than before, which is bad news in a homer-facilitating ballpark such as Yankee Stadium. Moving to the more spacious ballpark of the Marlins — I have no idea what they're calling it these days, and could care even less — should help.

*[Update] The well-named PITCHf/x expert Mike Fast points out that each ballpark has a systematic measurement error when it comes to measuring velocity. The new Yankee Stadium gun is 0.7 MPH slower than average, but Vazquez threw less than half his innings there in 2010. A quick and dirty calculation weighting his plate appearances — not pitches, which would be more accurate — at each park shows a -0.4 MPH bias for 2010. Doing the same thing for his 2009 season — an iffier proposition in terms of applying those park factors — yields a -0.2 MPH bias. So roughly speaking, just 0.2 MPH of a 2.4 MPH drop in velocity can be explained by park bias.

What's odd is how much worse Vazquez has been in pinstripes than elsewhere. He's put up a roly-poly 5.09 ERA in his two years with the Yankees (2004 being the other) against a 4.13 ERA in 11 seasons outside the Bronx. Lumping in his three years with the White Sox, the split is 4.65 in the American League and 4.02 in the National League. For one reason or another, he pitched markedly worse with men on base in the AL than in the NL, missing fewer bats and getting less support from his defense. Here's what I wrote back in early May at Baseball Prospectus:

Last year, colleague Eric Seidman examined the enigma that is Vazquez and showed that he performed significantly below average with runners on base. Whereas the average pitcher's opposing-batter performance with men on rose by 14 points of OBP and seven points of SLG over his showing with the bases empty, Vazquez's numbers went to hell in a hand basket, rising by 38 points of OBP and 42 points of SLG. Broken down by league as above (excluding 1998-99), the difference is even more dramatic:

What's going on? It's not simply a matter of serving up 'taters while surrounded by AL baserunners; Vazquez's rate of home runs per plate appearance edges up only a hair in both cases. His other peripherals are moving in the wrong direction to even greater extents:

His strikeout rate with men on base during his AL tenure falls off more drastically than it did during his NL tenure. Furthermore, worse results on the increased number of balls put into play are exacerbating the problem. During the time in question in the NL, his BABIP splits have been unremarkable, .302 (the same as his overall career mark) with the bases empty and .306 with men on. In the AL, his BABIP vaults from .282 when empty to .326 when occupied. Particularly given the way he's bounced back and forth between leagues over the past seven years — which would seem to preclude singular points of inflection in the data produced by wholesale changes in repertoire or approach — a good portion of the difference in his men-on-base splits simply has to be chalked up to matters of luck and/or randomness. The enigma endures.

Anyway, Vazquez's AL woes are a weird but persistent anomaly in an otherwise durable mid-rotation workhorse, and alas, departed Yankee pitching coach Dave Eiland was even less helpful in his attempt to solve that enigma than Yankee predecessor Mel Stottlemyre or White Sox pitching coach Don Cooper. At the very least, the Yankees can be thankful that they managed a side agreement in parting ways with Vazquez, offering him arbitration so as to lay claim to a compensation pick in the supplemental phase of the 2011 amateur draft. As we wish him better luck elsewhere, we can all breathe a sigh of relief that he's someone else's problem now.