If I may be allowed a little bit of shameless self promotion (beyond linking to my SI.com articles, that is), I wanted to take a moment this morning to remind you all of a perfect gift for Yankee fans. 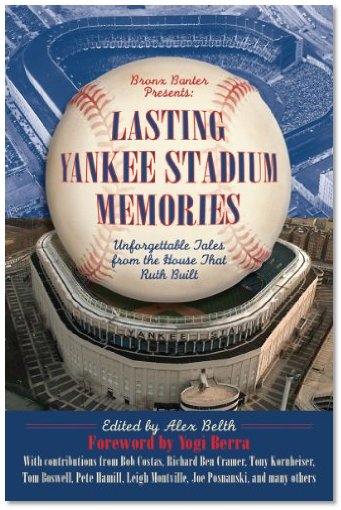 It is a book of which I'm tremendously proud, in large part because it is unlike any other Yankee Stadium memorial tome. This is not yet another exercise in myth-making, and does not hit the usual "greatest moments" beats. This is a book of very personal recollections, many of them taking place off the field, in the stands, the press box, the clubhouse, or even on the streets outside of the Stadium, by baseball fans and followers of all stripes, not just Yankee fans.

Above all else, it is a book of outstanding writing. True to Alex's passion for great sportswriting, this book is closer in form, structure, and content to a Great Sportswriting anthology than to any other Yankee Stadium retrospective. The difference being that these pieces were all commissioned by Alex Belth and, despite their wide range of approaches, all share in common the thread of Yankee Stadium.

For those of you who enjoyed the Lasting Yankee Stadium Memories series when it ran on Bronx Banter during the Stadium's final season in 2008, there are many new pieces that appear for the first time anywhere in this book, including those by several of the biggest names in the book and my contribution, which is in no way related to my rambling on-line entry. Meanwhile, this book gives a permanent home to some of the best from the original series, including Steve's hilariously harrowing account of his journey inside Yankee Stadium.

It's all packed up in a handsome little hardcover volume that is just $13.95 on Amazon as of this writing. If you or someone you know loves baseball and great writing, this book is a perfect holiday gift, and I say that more as a fan of the book and the other contributors than as one of its authors.

For more on the book, check out these interviews with Alex at New York Magazine and Gelf Magazine.

And while I'm at it, don't forget to pre-order your copy of Baseball Prospectus 2011, edited by Steve and co-authored in part by Steve, Jay, and myself.