Share All sharing options for: The Last Days of Babe Derek Jeter Ruth

The dangers of staying too long at the party: 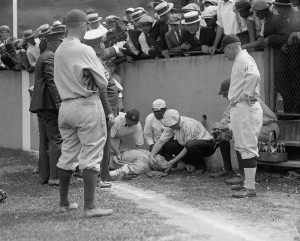 In Hawaii he played golf, laid a wreath on the grave of Alexander Joy Cartwright, the founder of American baseball, and complained after an exhibition game, "I guess I’m getting too old. Another year and I’ll have to quit."

Ruppert and Barrow winced when they heard that. Another year of Ruth. He would be forty in February, he was old and he was brittle. He was hurting the team on the field, and Ruppert liked to win. He did not like second place.—Robert Creamer, Babe: The Legend Comes to Life.

I’m definitely through as a regular player at the end of this season.—Babe Ruth, August 10, 1934.

Ruth made his last home appearance as a Yankee on September 24. It was a perfect day for playing baseball—partly cloudy, temperature in the mid-seventies, light breezes. He started in right field where he made an easy catch. He had a base on balls in the first inning, limped to first base, and left for a pinch-runner. A crowed of two thousand spattered its thin applause, and that was it. The Yankees lost the game, and that day the idle Tigers backed into the pennant…

Less than a year later:

He was batting about .180, still had a cold, and now a game leg. In Philadelphia he played until he had a turn at bat. After grounding out [to first base] unassisted, he left, forty years old, lame, overweight, and with a bad cold. That was the end. The Associated Press story from Philadelphia didn’t even mention his name.—Marshall Smelser, The Life that Ruth Built.

"I think the Babe should have retired so that he wouldn’t get hurt… When we came home from the western trip I told [Boston Braves owner] Judge Fuchs that Ruth couldn’t go on and that some action should be taken regarding his status."—Bill McKechnie, Ruth’s last manager.

"I have given Ruth his unconditional release, and he is through with the Braves in every way."—Judge Fuchs.