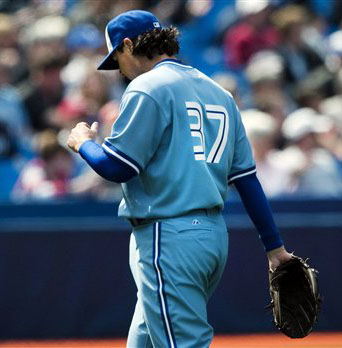 You can say goodbye to thoughts of the Yankees signing Scott Downs now that their top draft pick would be part of the price. (AP)

The results are in and 14 Type-A free agents were offered arbitration, meaning if they are signed by a new team, they will cost that team their top unprotected draft pick as compensation to their former club. One of those players, former Red Sox backstop Victor Martinez, has already signed with a new team, inking a four-year, $50 million deal with the Tigers and thus giving the Red Sox the 19th overall pick in the 2011 draft plus a pick in the supplemental round between the official first and second rounds.

Here are the other 13 Type-A free agents who were offered arbitration (2010 teams in parentheses):

There's some bad news for the Yankees there. For one thing, five of the 14 players offered arbitration were from the Yankees AL East rivals, the Rays and Red Sox, who will now either retain those players or get two top draft picks in compensation when they depart. Two more were from another AL East team, the Blue Jays, and three more were from the defending AL Central and West champions.

More significantly, while top free agents such as Cliff Lee, Carl Crawford and Jayson Werth were obviously going to cost, and likely be worth, a draft pick, having a pick added to the price of Plan-B starter Jorge De La Rosa, lefty reliever Scott Downs, or righty relief options Frank Francisco, Grant Balfour, or Jason Frasor (who, frankly, doesn't belong in the Type A group, but that's a topic for another post) largely eliminates them as viable free agent options this winter. And so the options continue to dwindle, even before that many names come off the big board.

Looking back at the above-linked posts about the Yankees outside pitching options this winter, their top relief options now look like this:

As for the Yankees arbitration offers, they only offered arbitration to one of their free agents, doing so for Type-B free agent Javier Vazquez, who reportedly has assured the team he will not accept and is reportedly close to a one-year deal with the Marlins. That last would net the Yankees a pick in the supplemental round between the first and second round in the 2011 draft. That will most likely be the Yankees top draft pick in 2011 as they are likely to sign one of the above Type-A free agents, most likely Cliff Lee, thereby losing their first-round pick, which is the 31st overall, the third-to-last in the round by virtue of the Yankees having the third-best record in baseball in 2010. The supplemental-round picks are also made in reverse order of the 2010 standings.

The ranked free agents not offered arbitration by the Yankees were Type A free agents Derek Jeter, Mariano Rivera, and Andy Pettitte and Type B free agents Kerry Wood and Lance Berkman. That eliminates arbitration as a fall-back position for the negotiations with Jeter and Rivera. It is largely irrelevant in the case of Pettitte, will either retire or sign a one-year deal with the Yankees. In the cases of Wood and Berkman, it avoids the salary risk of them accepting. Player salaries can not be reduced by more than 20 percent in arbitration. Wood made $10.5 million last year setting his minimum salary should he accept at $8.4 million. Berkman made $15 million, setting his minimum at $12 million. The Yankees clearly decided that the chance for a supplemental-round pick was not worth the risk of being stuck with those marginally useful players at salaries likely north of those figures.