It's Good to Be the King

Share All sharing options for: It's Good to Be the King 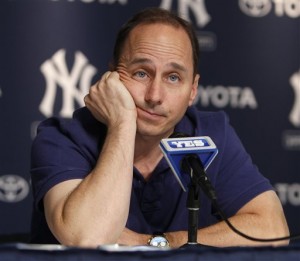 Step aside, Brian Cashman. Today it's somebody else's turn to run the Yankees (AP).

Throughout the young offseason, my Baseball Prospectus colleagues and I have taken turns describing how we would go about handling the offseason chores for each of the 30 teams as "GM for a Day." Over the past month, I've tackled the assignment for the Blue Jays and Red Sox, while Uncle Steve handled the dirty business of dealing with the Orioles, Reds, and Astros, the latter deploying his pitch-black sense of humor: ("[Step] 7. Cook and eat Brett Wallace"… [Step] 2. Hope that Carlos Lee experiences a sudden burst of retirement.").

As the final installment of the series, today I tackle the Yankees. Readers of this space will be more than a little familiar with my thinking, which stems from the payroll walkthrough I did earlier this month, and tries to hold the line on salaries. Some of what I'm doing is along the lines of what Brian Cashman is doing — pursuing Cliff Lee, playing hardball with Derek Jeter and Mariano Rivera, moving along with the plan to let Jesus Montero split time at catcher and DH — and some of it breaks from his script in a manner that probably won't shock those who've been following my thinking:

How badly do I need Lee? That's the real question in a rotation where even Pettitte's return isn't a given because he's said to be mulling retirement; yes, he's done that before and he's always come back, but he certainly sounds serious this time around. The free-agent market for starting pitching behind Lee is particularly slim. Ted Lilly and Hiroki Kuroda, the best available pitchers besides Lee, both re-signed with the Dodgers, and Jake Westbrook returned to the Cardinals. So many of the other available options tend towards damaged goods ... or palookas ... Of the small handful remaining, I'm not about to make the same mistake as predecessor Cashman did when it came to Carl Pavano, lest I be tarred, feathered, and chased into the Harlem River. If I choose to test the market beyond Lee, that leaves me with a small handful of choices: Bruce Chen, who looks to have had a career year in Kansas City; Jon Garland, who's coming off a very strong year in San Diego aided by ballpark and unremarkable competition; and Jorge de la Rosa, who has upside and health going for him—but then so did Vazquez.

Leaving aside Lee for the moment, I'm going to assume Pettitte won't return. That leaves a sizable void to fill, but I'm not going to overreact. One major reason Larry Rothschild was hired as the pitching coach last week had to do with an extensive interview process which included in-depth use of video when it came to Burnett, Hughes and Sabathia, so I'm going to assume his answers gave both Cashman and manager Joe Girardi enough reason to believe he could shore up Burnett's woes, which resulted in a 5.26 ERA, 1.2 homers per nine and just 7.0 strikeouts per nine. Even with that line, his SIERA was still just 4.42, so it would appear some regression is in order and that he can be at least league-average. Likewise, Hughes will be coming back from his first full season in the rotation and won't have to worry about an innings cap; with Rothschild's input, I see no special reason to fret about him.

What I'm going to do to cover for the loss of Pettitte is to do something Cashman resisted: restore Chamberlain to the rotation. The Yankees took a pitcher who once ranked among the game's top 10 prospects, a pitcher with three above-average pitches—certainly enough to succeed in a rotation—and jerked him around between starting and relief roles in the name of protecting his arm. They received diminishing returns for their self-imposed troubles, and clearly did no favors for his head, even if Joba wasn't the brightest guy in the world when it came to understanding the reasons behind the shuffling. Chamberlain has a career 4.18 ERA and 8.4 K/9 as a starter, and I have to believe Rothschild can help straighten out his mechanics while assisting with the mental side as well.

I do have other things I could try to do with Chamberlain: trade him as part of a package for Justin Upton. Figure him and one of the "three B's" (Dellin Betances, Andrew Brackman, Manny Banuelos) from a system which is brimming with pitching talent and unlikely to find room for all three in the coming years (consider how hard it's been just to get Hughes and Chamberlain into the same rotation); their stock might never be higher than it is right now.

It'll take more than that to get a deal done, of course...

In the end, I kept my opening day payroll around $210 million while addressing the Yankees' biggest need (starting pitching), injected some youth into the roster, took advantage of what flexibility I had, and worked from the assumption that I wasn't going to get everything I wanted, such as certain free agents or trades at certain (lower) prices. As such, there were a few contingencies which led to two basic roster scenarios, built around Pettitte's retirement decision and the ability to get the aforementioned deal done.

The piece was a whole lot of fun to write — who among us wouldn't like to have the game's largest payroll at our disposal, and a built-in audience for the accompanying sermon? — and I made sure to inject some humor into it (wait until you see the plans for Francisco Cervelli). While I'm sure not everyone will agree with what I've done — in general, not with respect to the sloppy little backstop — it should make for some interesting conversation as you gnaw on a turkey leg.

And on that note, here's wishing all Pinstriped Bible readers a happy Thanksgiving among loved ones...