It's Arbitration Offer Day! Do You Know Where Your Wallet Is?

Share All sharing options for: It's Arbitration Offer Day! Do You Know Where Your Wallet Is? 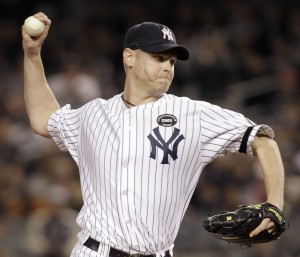 It should be an easy call for the Yankees to offer Kerry Wood arbitration, and perhaps some smoked salmon as well. (AP)

Today is the last day for teams to offer their free agents arbitration. It used to be that failing to offer arbitration pretty much ended things between player and team, but now the two can keep talking regardless of whether an offer is made. The consequences of offering or not offering come down to three things:

1. You offer the player arbitration but he signs with another team, netting you that team’s first-round pick, a sandwich pick, or both, depending on the player’s free agent type.

2. You offer the player arbitration and he accepts, which means that you get him back for next year, but at an inevitable raise, whether through negotiation or an actual hearing.

3. You don’t offer arbitration and the player signs elsewhere, but having not offered, you don’t receive a compensatory pick.

Players who were rated type A free agents bring back a first-round pick and a sandwich pick. Type B players only bring a sandwich, no fries, no crudités platter. The gamble is simply this: if you offer a player you didn’t really want arbitration in order to get the picks but he surprises you and accepts, you could get stuck. This happened to the Braves last year with Rafael Soriano, with the result that the Rays were able to take him off their hands very cheaply (Jesse Chavez).

The Yankees have a half-dozen players who require a decision: Lance Berkman (type B), Derek Jeter (A), Andy Pettitte (A), Mariano Rivera (A), Javier Vazquez (B), and Kerry Wood (B). Most of these are easily disposed of. Berkman falls into the "Hell no" category, as the sandwich pick just isn't worth the risk that he might say yes. Vazquez is a more interesting gamble. You really, really, really don’t want him back, but he seems to have several teams sniffing around him and should sign elsewhere. The risk of his accepting seems low, so perhaps you make an offer. Kerry Wood seems like an easy "yes," because if he accepts, great, you’ve still got Kerry Wood as your setup man. The only downside is an increased salary, which he was going to get whether he stayed or departed.

That leaves Jeter, Pettitte, and Rivera. The decision tree here is different because none of the three are likely to sign with another team. The gesture is thus more symbolic than anything else, although if there were other teams sniffing around, being penalized their first-round pick would certainly put a damper on their interest. The Yankees’ risk is minimal. Neither Jeter or Rivera are likely to accept because both are seeking multi-year contracts. If they were to accept, the Yankees would run the risk of both players taking huge salaries in arbitration if negotiation failed, but they would be protected in the sense that arbitration only results in one-year contracts. In other words, Jeter would get his 3,000 hits and if he had a bad year the Yankees could be done with him. Rivera would pitch his age-41 season and then be subject to reevaluation. Given that his last three years have been exemplary, the financial risks are large, but again, the Yankees wouldn’t be paying him for more than one year. Accepting arbitration would be a surrender for both players. The Yankees might as well offer.

Finally, the decision as to whether or not to make an offer to Pettitte seems largely irrelevant given that he has insisted that he will pitch for the Yankees or not at all. If Pettitte cares about symbolic gestures, I suppose you offer; taking the pitcher at his word, there will be no bearing on the outcome either way.