Share All sharing options for: Will Cooperstown Call for Yankee Quartet? (Part III) 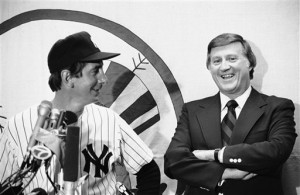 The Odd Couple of Billy Martin and George Steinbrenner both have strong cases for the Hall of Fame (AP).

Today at Baseball Prospectus, I take up the Hall of Fame cases of Billy Martin and George Steinbrenner, who share space on the Expansion Era ballot to be voted upon at the Winter Meetings in about two weeks (the article is out from behind the pay wall, so don't be shy). The most famous Odd Couple of their era were quite the pair, the poor street tough from a broken home and the child of privilege and wealth, united by their volatility and their indomitable will to win but unable to coexist in each other's company for very long in any given stretch. Both men have full helpings of The Good, the Bad and the Ugly to sift through when making their cases for Cooperstown. The Martin segment expands upon the argument I made here a couple weeks back, accompanied by some more direct comparisons to the other Hall of Fame managers than I made at the time. It also goes into a bit more detail regarding Martin's strategic genius, the best summation of which belongs to Thomas Boswell, as quoted in Ken Burns' Baseball:

Billy Martin proved what a powerful strategic tool paranoia is. He believed that everyone was against him. And so he spent every waking moment figuring out how imaginary enemies could be defeated in their nefarious plots. And sometimes he not only created strategies to defend against things that would never be done against him, but he realized that those attacks were in themselves novel and he would then try those attacks that he had already dreamed up a defense for. That's why he was so wonderful at suicide bunts and double steals and any way that you could humiliate or psychologically defeat the other team, he was sure that's how the world reacted to him. He was sure the world hated him. And so he turned that really raw, frightened paranoia into wonderful strategic intelligence.

Martin loved to play for the game's first run, because it forced the opponent to score two to beat him, so he often employed smallball tactics — steals, hit-and-runs, sacrifices — to get that run on the board. Today, such moves would probably draw some amount of disdain from the sabermetric set, which favors Martin's contemporary, Earl Weaver, in his predilection for playing for the big inning. But keep in mind that offensive levels were about 10 percent lower in those days, and one or two runs stood up more often than it does today. Anyway, I think his case is a strong one.

As for Steinbrenner, having already traced the arc of his career upon the occasion of his passing back in July, I cut to the chase. His is a tough case to evaluate because there are relatively few owners in the Hall of Fame, and because he's obviously got some fairly serious marks against him:

The question of whether he belongs in the Hall of Fame is a thorny one, because for starters, the ranks of owners in Cooperstown, like those of general manager, are underrepresented. Only four non-playing owners—and four very different men—are in the Hall: Barney Dreyfuss, O'Malley, Bill Veeck, Jr., and Tom Yawkey. Dreyfuss was the Smartest Man in Baseball during his time, a man in the middle of every important decision about the game for four decades dating from the 1890s to the early 1930s. O'Malley was the game's ultimate power broker, the man whose sneeze gave the entire National League a cold. Veeck was the game's ultimate iconoclast, someone who thumbed his nose at baseball's establishment on matters both fun and serious. Yawkey… well, he was an open racist who ran his team like a country club and spent lavishly in pursuit of a championship that never came; what the hell he's doing in the Hall of Fame is utterly baffling. Also occupying Cooperstown's executive class are Comiskey, Clark Griffith, Mack, and Albert Spalding; all owned teams, but they all had playing and managing careers as well, and their contributions were of particular importance during the game's infancy, so it's tough to measure Steinbrenner against them.

The most glaring absence from the ranks of enshrined owners is that of Jacob Ruppert, who owned the Yankees for 24 years (1915-39), a span during which they won their first 10 pennants and seven world championships. Ruppert and partner Tillinghast L’Hommedieu Huston (who would sell his share of the team in 1922) would purchase the contract of Babe Ruth, build Yankee Stadium, and hire Hall of Fame general manager Ed Barrow, the architect of those winning teams. Dan Topping, who co-owned the Yankees from 1945-64, a span that included 15 pennants and seven world championships, has a strong case as well. An incomplete list of other owners with reasonable cases would at the very least include Sam Breadon, August Busch, Jr., Charlie Finley, John W. Galbreath, Ewing Kaufmann and Ted Turner, and I'm sure I've left off others.

Those owners aren't under consideration on this ballot, so this panel cannot remedy their oversights. Instead, the committee is limited to deciding whether the positive aspects of Steinbrenner's case outweigh the negatives. On the one hand, he was undeniably one of the game's foremost power brokers. His teams had stretches of great success in part because he was a visionary when it came to surviving in the post-Messersmith-McNally world. He was a singular personality who used his team's financial might to best advantage, a marked contrast to today's often-anonymous corporate bean counters demonstrably more concerned with profits than championships. Steinbrenner put his money where his mouth was, time after time, and in doing so he built the Yankees into what they are today.

On the other hand, Steinbrenner's pursuit of free agents helped to drive up salaries considerably, which in turn played a part in widening the gulf between the game's haves and have-nots. His preference for seasoned and often over-the-hill veterans resulted in many a bad contract, and cost the team hordes of quality prospects over the decades, players who may have brought home even more glory had they been permitted to develop in the Bronx. He flaunted the rules by participating at least somewhat in the behind-the-scenes operation of the Yankees during his two suspensions, the first of which, owing to a conviction related to illegal campaign contributions to Richard Nixon, had nothing to do with baseball but the second of which, paying a known gambler to dig up dirt on Dave Winfield, did. He bullied his employees — general managers, managers, players, secretaries, et cetera —when it suited him, and at his worst made their lives living hell.

As I note, Steinbrenner is something of a Rorschach Test for baseball's economic expansion in the free agency era. Some can look at him and see History's Greatest Monster, others a particularly savvy businessman whose mellowing with age was an important part of his success. It wouldn't entirely surprise me if he were admitted to Cooperstown, but it might be best to let his candidacy wait a cycle for the emotions surrounding his legacy to settle.

Martin and Steinbrenner aren't the only men on the ballot, of course. Last week I took up the cases of Marvin Miller and Pat Gillick, and the week before that, I tackled the players on the ballot, though I didn't have as much room to evaluate ex-Yankees Tommy John and Ron Guidry as I did here. The players have been fairly picked over by as many as 15 years of BBWAA balloting, but the non-players, with the exception of Miller, haven't been voted upon before, and to a man, they have stronger cases for enshrinement. Miller served as the executive director of the Major League Baseball Players Association from 1966-82, overseeing baseball's biggest change since integration via the dismantling of the Reserve Clause and the dawn of the free agency era, the time when the Steinbrenner-Martin Yankees were initially so successful. Gillick was a longtime general manager who was the architect of world champions in Toronto and Philadelphia, as well as playoff teams in Seattle and Baltimore. Before leaving for Toronto, Gillick was actually the scouting director for the Yankees in 1975 and 1976. His most notable draft picks were Jim Beattie, who never quite got a chance to settle in New York before being shipped to the Mariners, and Willie Upshaw, who became part of Toronto's first contending teams in the mid-Eighties. We'll find out who gets in on December 6.