The Tao of Mo

Share All sharing options for: The Tao of Mo 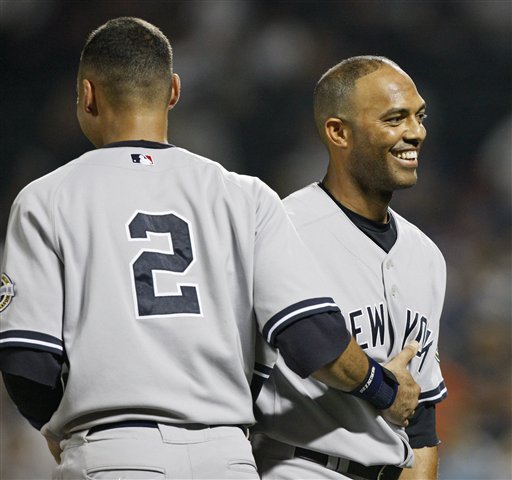 The contrasts between Derek Jeter and Mariano Rivera have been highlighted by their approaches to free agency this offseason. (AP)

The the Yankees reportedly opened the Derek Jeter contract negotiations over the weekend with an offer of $45 million over three years. An offer which, in my opinion, given Jeter's actual on-field value, is generous without being unreasonable. Jeter's agent, Casey Close, responded by telling Mike Lupica that the Yankees' negotiating strategy is "baffling." Close, of course, brought "Derek's total contribution to their franchise" into the discussion, adding a troubling little item about how "the Yankees themselves have stated Derek Jeter is their modern-day Babe Ruth."

I don't know the context of the statement Close is referring to, but not only was it surely hyperbole when it was made, but Close might want to note how long Ruth lasted in pinstripes once his batting average dipped below .290, as Jeter's did for the first time in 2010, or that the Yankees' three-year offer would keep Jeter a Yankee through his age-39 season, which is as long as Ruth lasted in the Bronx.

Beyond that, Close might want to ask himself why Fernando Cuza isn't crying to Lupica about lack of respect the Yankees are showing his client. That client being Mariano Rivera, who relative to his fellow closers, has a stronger case for being a modern Babe Ruth than Jeter does in any context. The Yankees haven't even broached the subject of Rivera's next contract with Cuza, but it doesn't seem as though any hard feelings have arisen from that fact, and for all of the ink and pixels spilled over Jeter's negotiations (these included), little of anything has been said about Rivera's next contract.

The contrast does Jeter and Close no favors. Though, to be fair, it's not an apples-to-apples comparison. Here's why:

• Jeter is looking for a contract that will take him into his forties. Rivera will turn 41 next Monday.

• The $15 million Rivera earned each year of his last contract was the highest annual salary ever earned by a closer. Jeter made more than that each of the last eight years and was still never the highest-paid infielder in baseball.

• Further to that point, there is no Alex Rodriguez figure lingering over the Rivera negotiations, no friendly rival who has already secured a greater commitment to the team despite holding an inferior place in its history. Imagine that a few years back the Yankees had signed Billy Wagner to a deal that paid him $20 million through the age of 45. Things would be very different between them and Rivera right now.

• As great as Rivera is, it's not hard to argue that a shortstop who starts 155 games a year is more important than a pitcher who throws 60 to 70 innings a year (though, amazingly, people do make that argument).

Still, despite all that, the contrast between Rivera's patient silence and the affronted squeaky-wheel approach of Jeter (via Close) tempts one to say that the biggest difference between the two negotiations is the level of class with which they are being handled by both sides. I think that's too much. For one thing, the Rivera negotiations aren't being handled at all by either side yet (though the negotiations for Rivera's last contract were drama-free and, perhaps not coincidentally, resulted in the exact terms the Yankees have offered Jeter, $45 million over three years). I do, however, think that the Jeter negotiations are coming to highlight Jeter's almost pathological inability to show public weakness.

Asked about injuries, he always shrugs them off and says he'll play the next day. Even when it's clear that he's hurting and his performance and the team are suffering as a result, Jeter refuses to admit he's hurt. Asked about a season that ended short of a championship, he always parrots George Steinbrenner's old line about that season being a failure, no matter how successful it actually was, effectively dismissing the effort and attention of his teammates and fans. Asked about his poor showing in advanced defensive metrics, Jeter has never been anything but dismissive. Not once has he ever said something as mild as "I don't think I've been that bad, but this wasn't my best year in the field, and it's something I plan on working on this offseason." Though he's always available to the press and understanding of that aspect of his job, Jeter has always been intensely guarded and almost never shows any genuine emotion. By comparison, Rivera reacts to every blown save by reminding the press corps that he's human. That failure is something that happens in baseball and that he's not immune to it.

I've always thought Jeter's stoicism was partially his impression of how players are supposed to behave and partially a defense mechanism, but I do wonder if 16 years of playing Mr. Perfect hasn't eroded his self-awareness, leading him to confuse the facade with the man behind it. Rivera knows he's not perfect. He knows he can't play forever. He knows that as soon as he starts to slip the team is going to have to replace him. Jeter seems impervious to such suggestions, as if the only reflective surfaces in his house are his five Gold Gloves.