Share All sharing options for: Roster Spots and the Final AFL Wrap-Up 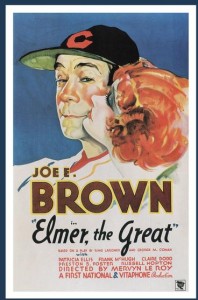 Will they someday make a movie about one of the pitchers the Yankees will lose in this year's Rule 5 draft?

It was a huge week for prospects around baseball, as teams were required to finalize their rosters for the Rule 5 draft by midnight Friday. The Yankees chose to protect northpaws Dellin Betances and Ryan Pope, as well as potential four-corner utilityman Brandon Laird. Among the notables left unprotected are pitchers Craig Heyer, George Kontos, and Lance Pendleton. As I wrote in my Rule 5 breakdown, I expected Heyer and Pendleton to be left off, but I did think that Kontos would be protected given his young(ish) age and experience. He did himself no favors while in Arizona by spontaneously combusting several times, but given that the AFL is a hitter’s league, it’d be surprising if Kontos’ performances there served as one of the largest weights in roster choices. Perhaps he’s just collateral damage, the cost of doing business.

When the draft comes, it wouldn’t be shocking to see all three hurlers who weren’t given protection selected. Heyer, the least experienced of the lot, is the one most likely to return to the organization. Kontos and Pendleton, on the other hand, have a reasonable chance of sticking with other teams desperate for some relief help. Both can go multiple innings as former starters, and small-market teams could look to pay the league minimum for a couple of innings munchers, rather than paying a higher price for a potentially washed up "name" player.

Prospects highlighted the Yankees’ week; first, they traded Juan Miranda to Arizona for Scottie Allen, then they sent a stack o’ cash to Atlanta for Cody Johnson. The former 2006 first-round selection (24th overall) is a hulk of a left fielder, clocking in at 6-foot-4, 240 pounds. Johnson was a surprise draft pick, not a sure bet because he didn’t make consistent contact. On the rare occasion that barrel met ball, he could smoke the ball as well as any other masher; that’s still the case, but Johnson just hasn’t put everything together since turning pro.

Johnson is the epitome of a Three True Outcomes—walk, strikeout, or homer—player. Actually, that might not be a fair description: Two True Outcomes—strikeout and homer—is far more fitting. In his time in rookie ball in 2006, he K’d in 49 of his 114 at-bats, drew 12 walks, and slugged just one homer. Though he improved immensely in his second season—.305/.374/.630—as he has hit the upper levels, Johnson hasn’t brought the lumber or gotten on base much. His 2010 was on his worst, with a .212/.289/.398 line with 18 bombs, but an alarming 151 strikeouts in 344 at-bats. Let’s reframe that: In 260 plate appearances at Double-A, Johnson struck out 48.9 percent of the time. Nearly half of his plate appearances ended with a whiff. Johnson’s career whiff rate is over 39 percent.

Strikeouts are better than a double play, but Johnson’s splits are beyond ridiculous. He doesn’t get on base much, and if he wants to make it to the majors, he’s going to have to learn to recognize pitches and really cut the strikeouts. Johnson can still mash and takes walks, but with his whiff rates four to five times greater, he won’t contribute much. He has been assigned to High-A Tampa, where he’ll have a lot of work to do to recoup his former prospect status.

The AFL drew to a close Saturday evening, when the Scottsdale Scorpions defeated the Peoria Javelinas. The Phoenix Desert Dogs, guided by Dodgers skipper Don Mattingly, had been out of action since Thursday; the team finished with the second-worst record overall.

Manny Banuelos, LHP: One appearance: 5 IP 1 H 1 R 1 ER 1 HR 1 BB 2 K—A pair of strikeouts and a walk doesn’t look great for five innings of work, but a 3.00 ground-out/air-out ratio sure does. Banuelos held his own in the bandbox league, getting punished in a couple of outings, but otherwise pitching well. His ground-ball and walk rates increased while his strikeout rates decreased, but the extra work is really what he needed. As MLB.com’s Jonathan Mayo explains in a quick piece on Banuelos, the teenager spent his time off following his appendectomy tinkering with his pitches and becoming a more physical pitcher, which aided him in increasing his velocity. In a separate piece, Mayo listed Banuelos as the fourth-best prospect in the league, singling his changeup and heater out as particularly impressive. The Mexico native wraps up his campaign with a 25 IP 31 H 14 R 10 ER 1 HR 10 BB 16 K line and a 1.55 GO/AO ratio.

Craig Heyer, RHP: No appearances—The potential Rule 5 draftee did not pitch this week and finished with an overall line of 18 IP 16 H 6 R 5 ER 1 HR 3 BB 7 K and a 2.92 GO/AO ratio in seven appearances. Teams may look at the grounders and see a useful piece when their club is in a jam—a couple of runners on, one out in a close game—and take a gamble to see if the righty’s stuff will translate to the majors right away. Heyer certainly didn’t hurt his chances of being selected, but given that he hasn’t pitched above A-ball, chances are that if he’s selected, he’ll be offered back to the Yankees.

George Kontos, RHP: One appearance: 1 IP 0 H 0 R 0 ER 0 HR 1 BB 0 K—Kontos had multiple disaster outings while in Arizona, and perhaps subsequently was not added to the 40-man roster. In his final five appearances, Kontos’ command abandoned him, as he allowed nine walks, many of which contributed to his giving up 13 earned runs in those five appearances. As I wrote earlier, given his experience in Triple-A and work as a starter, teams may look to Kontos as a cheap relief option and choose him in the Rule 5. He’ll have to do better than he did in Arizona: a line of 12.2 IP 21 H 21 R 17 ER 2 HR 10 BB 11 K is not going to get him much rope.

Brandon Laird, OF: 5-for-16 3 R 1 2B 1 HR 5 RBI 0 BB 2 K—After putting his bat on freeze-dry for the last couple of weeks, Laird finally found a pulse and started hitting again. Finally recovering part of his power stroke, he grabbed headlines with a massive home run on Monday, and keeping to his "go big or go home" attitude with the bat stroked a double during the week as well. The slugger didn’t have a banner campaign; though more than half of his 26 hits were for extra bases, some singles and walks would be nice to pump up an anemic .282 on-base percentage. Laird hasn’t drawn a walk in over two weeks, and he’ll have to work more on his plate judgment to look more attractive to the Yankees come spring training. He ends his 2010 campaign with a .236/.282/.436 triple-slash.

Jose Pirela, SS: 1-for-11 1 R 0 2B 1 HR 2 RBI 1 BB 3 K—Either Pirela had it or he didn’t; there were no in-betweens for the 21-year-old, as his weeks alternated between freeze-dried and solid. He didn’t look great with a glove, either, committing five errors while playing around the infield. Pirela isn’t a big prospect, but the Yankees probably hoped to get a little more out of him than a meager .180/.329/.364 line.

Ryan Pope, RHP: One appearance: 1 IP 1 H 0 R 0 ER 0 HR 0 BB 1 K—Now with a roster spot to brag about, Pope looked good in Arizona. Though he has definite fly-ball tendencies and was pitching where those tendencies get punished, he didn’t get beat around too badly, giving up a pair of jacks in 11.1 innings. His strikeout rate kicked up a tick, and though he gave up more hits than innings pitched, that’s not a major concern considering the environment. He finished off his campaign with 11.1 IP 14 H 5 R 4 ER 2 HR 4 BB 10 K. He’ll head to Triple-A next year and hope to get a look when the Yankees are searching for some long relief help during the season.

Austin Romine, C: 1-for-5 0 R 0 RBI 0 BB 1 K—Turns out last week wasn’t the end of the line for Romine; he got into a couple more games for the Desert Dogs, though he didn’t play whole games. The backstop had a week-long layoff between games, though it’s unclear if it was because of an injury or just to give him a breather. During the Fall League, Romine looked sluggish behind the dish and wracked up as many passed balls as he had during a full season (well, 99 games) at Double-A. His .279/.313/.328 aren’t exactly inspiring—especially that on-base percentage, which is near his rates for the last two years—but getting some extra reps to build strength will help Romine in the long run. He needs experience and strength, both of which he is lacking.