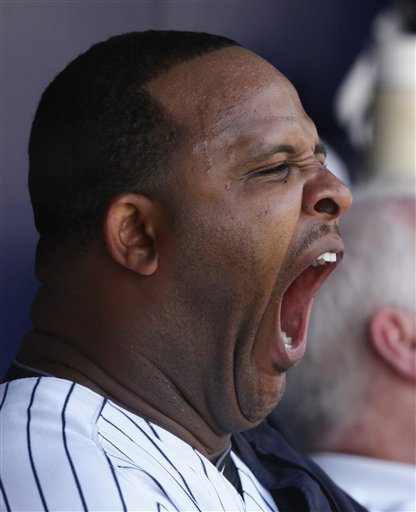 As you surely know by now, the right man won the American League Cy Young award. Which is to say, CC Sabathia didn't.

That's no knock against Sabathia, who had a fine season. In fact, Sabathia's second season in pinstripes was very similar to his first. Sabathia started 34 games both years, completing two both seasons, but threw 7 2/3 more innings in 2010 while posting an ERA 0.19 runs lower. However, the decreased run scoring around the league translated that lower ERA in to an ERA+ three points lower than his 2009 mark. Sabathia struck out the exact same number of batters in both seasons (197), but doing so in 7 2/3 more innings this year meant his strikeout rate was a pinch lower. Some correction in his opponents' batting average on balls in play brought up his hit rate, and his walk and home run rates were also a pinch higher, the former helping to raising his WHIP by .043. Of course, he also won two more games than a year ago and lost one less, which had something to do with the fact that five more of those 34 starts were quality this year.

The big difference between Sabathia's first two Yankee seasons was how he finished. In 2009 he went on a run down the stretch, going 8-0 with a 1.62 ERA and 80 strikeouts in 72 1/3 innings in the ten starts prior to his final outing of the regular season, then posted a 1.98 ERA in five postseason starts, all quality, to help pitch the Yankees to a world championship. This year, a torn meniscus in his right (landing) knee undermined his late-season performance as he gave up five or more runs in three of his final seven regular season starts, then posted a 5.63 ERA in his three postseason starts as the Yankees were eliminated in the ALCS (though they won all three games he started, two of those wins were despite his performance).

That inconsistent stretch run undermined Sabathia's already weak Cy Young argument, particularly when rival David Price matched him for eight scoreless innings on September 13, then came back and beat him on September 23. Indeed, Price finished ahead of Sabathia in the voting, as he should have, but one could argue that even at third on the ballot, Sabathia received too many votes.

A quick peak at Baseball Prospectus's win-expectancy-based SNLVAR (Support Neutral Lineup-adjusted Value Above Replacement) gives us this leader list in the AL this year:

That's not the end of the argument. I'd certainly rank Cliff Lee higher, and likely Lester as well, while I'm less keen on Trevor Cahill's season, but I think it gives a solid indication of who else had a strong pitching season in the junior circuit this year and where on that list Sabathia likely falls.

Again, there's no shame in being the sixth-best pitcher in the league. There are 70 rotation spots that need to be filled in the AL, 14 of them ostensibly by staff aces. Sabathia ranks in the top ten percent of the former list and in the top half of the latter. Of the top-10 finishers above, only Sabathia, Hernandez, Verlander, Lester and Weaver were also in the top-10 in 2009 (though Lee would have been had he not switched leagues). Those six and Price, are the true aces in the league, and of those six, only Hernandez has been better than Sabathia both last year and this. The Yankees and their fans don't need an ill-gotten Cy Young award to confirm how well their investment in Sabathia is paying off.

Speaking of that last, I have a piece up on SI.com that ticks off some of the more egregious, wins-based Cy Young gaffes in the award's history, among them, the 2001 AL award, which went to the wrong Yankee and could, as a result, have a direct impact on a Hall of Fame vote.