Once Again, the Case for Upton

Share All sharing options for: Once Again, the Case for Upton 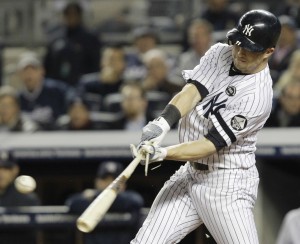 When Brett Gardner is about ready to hang 'em up, Justin Upton will still be in his prime. (AP)

In a blog post this morning, Joel Sherman of the New York Post wrote that the Yankees were not one of the teams pushing to acquire Justin Upton. "They like their current outfield enough that they do not see the merit of surrendering the four-to-five big prospect pieces necessary to complete a deal," Sherman wrote.

The Yankees should like their outfield. It’s productive, has the potential to actually be better next year, and the three starters combined will make about $18 million (Brett Gardner, not yet arbitration eligible, will either get a small raise or a renewal, hence my fudging the number), or $13 million less than Alex Rodriguez will make by himself. They can afford to be complacent when it comes to the pasture patrol. The question is whether or not they should be.

The first matter is contractual. Upton is signed through 2015. Gardner hits arbitration eligibility, which is to say he gets expensive, after the coming season. Granderson is locked in until 2012, and then the Yankees will have a $13 million option for 2013. Swisher is signed through 2011 with a $10.25 million club option for 2012. The outfield is solid for the coming year, but after that, the Yankees will have decisions to make. If you add Upton, you have certainty about one-third of the crew for a long time and you still have something valuable after that, something to trade or re-sign, because the guy will still be under 30 at the end of the deal.

Then there are questions about production, particularly with Gardner and Granderson. The latter seemed to have made a major breakthrough at the end of the year, changing his approach sufficiently that he might no longer need be considered a platoon player. However, what we saw also could have been a fluke hot streak, or he could simply regress. As for Gardner, we’ve been through this many times: after his wrist injury he didn’t hit, and so the Yankees can’t be secure in what they have. My suspicion is that the "real" Gardner is close to his overall numbers for the last two years—.274/.371/.379. Now, through in some stolen bases and good defense and you have a valuable player. Thing is (1) that’s a supposition, not a sure thing, and (2) that player still isn’t as valuable as Upton should be. If you want a (3), it’s that Gardner, who is just getting started, is about four years older than Upton. Upton will still be in his prime when Gardner will be winding down his career. The same is true of Granderson and Swisher.You want a (4)? I’ll give you a (4): Gardner is one knee injury away from being completely without value. A more rounded player, like Upton, can fall back on other skills if one is taken away.

As for dealing four or five prospects, gosh, that is expensive. Yet, those prospects don’t necessarily have a lot of value to the Yankees except as trading pieces. Most of the Yankees’ prospect wealth is in starting pitching, and in starting pitchers who are going to be ready in the next season or so. The Yankees can’t and won’t use them all. They’ve barely accepted the idea of Phil Hughes, while their waffling with Joba Chamberlain is going to go down in history as an example of how not to break in a promising pitcher. Their difficulty in getting youngsters acclimated to the bigs goes hand in hand with their love of veterans. There simply isn’t room in the big-league rotation for Ivan Nova and Dellin Betances and Andrew Brackman and David Phelps and Adam Warren and Manuel Banuelos, not when CC Sabathia is signed through 2015, A.J. Burnett through 2013, and Hughes remains under team control through 2013. Andy Pettitte will be welcomed back if he decided to pitch for another season, and Cliff Lee might be coming. Where are all these young pitchers going to play?

Not all of those prospects were created equal, and not all of them will even stick in the big leagues, whatever organization they are with. Some will prove to be less than they appeared to be, others will get hurt and fall away. Whatever their futures, they aren’t valuable to the Yankees if they take place at Scranton. Contrary to the way we typically think of things, the longer a pitcher stays in the minors the less you’re accomplishing in terms of learning, and all you’re really doing is putting mileage on them, every pitch bringing them closer to the inevitable injury. The Yankees have to retain a certain reservoir to cover for injuries and the occasional Javier Vazquez-level disappointment, but beyond that, they’re just letting the equivalent of fresh produce decay into a moldy, putrid soup. You might as well trade them in for something useful before they become useless. There is risk, sure, but this is one of those few times you have a solid chance of getting value back in return. You’re not speculating on a prospect here, you’re bidding on an established major leaguer.

So, back to the beginning: do the Yankees have a burning need to acquire Upton? Not necessarily. Is that a reason not to make an aggressive bid? Not necessarily. Sure, they’re set right now, but you can’t know the future, and having a 23-year-old power-hitter in the fold, and knowing you will have him for the next six years, is the kind of contingency which can solve a great many problems.