Upton is Over If You Want It

Share All sharing options for: Upton is Over If You Want It 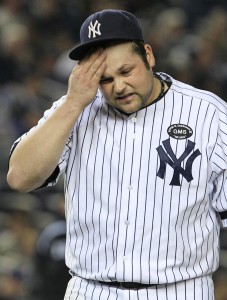 If he can help bring Upton, Chamberlain should do next year's sweating in different colors. (AP)

Since I commented on Kevin Towers floating the idea of dealing Justin Upton yesterday, what seemed like a mere trial balloon now has taken on a greater reality. The Diamondbacks barely escaped losing 100 games this season. Their needs are obvious: a first baseman to replace free agent Adam LaRoche: help in at least one of the outfield corners, both if Upton is dealt; starting pitching depth; and anyone who can reasonably call themselves a reliever—their bullpen wasn’t the worst of all time, but it was in the top five. The Yankees have the inventory to help them, but should they?

Upton is one of the most talented young players in baseball. The first overall pick of the 2005 draft, he tore the cover off the ball at two levels at 19 and made his major-league debut that same year. His age-20 season wasn’t great by the standards of right fielders, but was fantastic given his age. In 2009, he followed with one of the better seasons ever produced by a 21-year-old. His hitting .300/.366/.532 in the majors when most players his age were in Single- or Double-A compared favorably with any number of current or future Hall of Famers, a list stretching from Ted Williams and Jimmie Foxx to Alex Rodriguez and Albert Pujols.

This season was a different story. Like his older brother B.J., who had a big season at 22 and then went backwards, Upton disappointed with a .273/.356/.442 season in 2010. Ironically, if he had been a 22-year-old rookie, we might look at the season and say, "Not bad. A little inadequate for a right fielder, but he’s only 22 and maybe he builds on this." Upton had already set a higher bar for himself, so his season was inevitably seen as a letdown.

Brett Gardner is a very exciting player, but may yet prove to be a number four outfielder. Even with his injury-related second-half slump, he had a very good year, a Brett Butler year. Yet, as good as that year was, there is absolutely no chance that he will ever have the kind of year that Upton had at 21. At 27, he is long since done developing, and even if he had untapped reserves of potential, the current #11 is never going to hit 10 home runs in a season, let alone 25. Knowing that, if you’re the Yankees are you satisfied with a good thing in Gardner, or do you say, "If we spend a little, bet on the upside, we could get even better?"

It’s a difficult question to answer. My own inclination would be to say that complacency is never a good idea and that Upton is a special enough talent at a young enough age that the upside is worth the risk of parting with a few prospects. After all, none of those prospects is likely to turn into an Upton-level player, or the pitching equivalent. The Yankees have enough pitchers that they could construct a pretty interesting package of prospects for Towers, perhaps including the anonymous middle guy who used to be Joba Chamberlain. He too would be an upside gamble for an acquiring party. Basically, as long as Jesus Montero isn’t going anywhere, the Yankees are going to be fishing from a deep pool.

Prospects are like today’s sushi and tonight’s empty seats on the midnight train to Georgia: after a certain point, they’re just not valuable anymore. Sushi spoils, an unfilled seat doesn’t benefit the railroad, and prospects sit at Triple-A, age, and atrophy. The Yankees have many pitchers on the verge, but they’re not the Cincinnati Reds, a team that has turned over four-fifths of its rotation to homegrown twentysomethings. A few of the Yankees pitchers have value to the team in case of injury or the retirement of Andy Pettitte or Cliff Lee unexpectedly turning down a kajillion-dollar contract. Otherwise, their only value is as trade bait. Again, given the incredible upside that Upton represents, an upside that was on display just a year ago, this is probably the time you want to fire those surplus prospect bullets if you have them. Who else are you holding out for? Albert Pujols? Superman?

Even if they do ante up, there is no guarantee that the Yankees will win Upton; a year of salary and a collegial relationship isn’t going to earn Brian Cashman any breaks. For me, all I would like to hear is that they made a game effort, win or lose, as they did with Cliff Lee during the season. This is a team that needs to get simultaneously younger and better. Upton could accomplish both in one go. Besides… If the Yankees don’t make the best offer, the Red Sox will.