All Or Nothing: The Rotation Options Dwindle

Share All sharing options for: All Or Nothing: The Rotation Options Dwindle 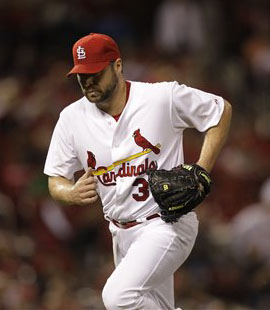 Jake Westbrook is the latest starting pitcher to hustle off the market. (AP)

Last Thursday I took a look at the available free agent starting pitchers not named Cliff Lee or Andy Pettitte and boiled it down to four viable alternatives for the Yankees in the event of Lee singing elsewhere and/or Pettitte retiring. Less than a week later, half of those pitchers have already signed with other teams. Worse yet, the two pitchers who signed were the top two in my ranking of the four. Hiroki Kuroda re-signed with the Dodgers for just one year and $12 million. Jake Westbrook re-signed with the Cardinals for two years and $16.5 million with an $8.5 million mutual option for 2013. Both deals are extremely reasonable, making the signings all the more painful for the other teams around the league looking for starting pitching help.

With De La Rosa a Type-A free agent likely to cost the Yankees their top draft pick should things come to that.

Further limiting the outlook of the Yankees' 2011 rotation is word from Brian Cashman, per ESPN New York's Wallace Matthews that, "the experiment to turn Joba Chamberlain into a starter [is] officially, permanently over."

[Cliff turns to the camera as a single, solitary tear rolls down his cheek.]

That same article contained this from Cashman on Ivan Nova:

"I think Ivan Nova has a good chance to be in our rotation, regardless [of whether or not the Yankees sign Lee or Pettitte]. He can be our number five, or maybe better than that, I don’t care. I think he’s got a chance to take the ball for us every five days. If you've got quality arms, I don’t care if they’re inexperienced or not, they’ll make your problems go away real quick. We think he’s got a quality arm. He’s got to earn it still, but he opened a lot of people’s eyes last year in our organization and outside the organization."

I'll avoid the obvious contrast with Chamberlain, who apparently isn't a quality arm (oops), only to say that if the Yankees sign Lee and Pettitte, Nova won't be in the rotation without the aid of an injury because three (Sabathia, Hughes, Burnett) plus two equals five. Meanwhile, what's already left out there on the market, if the Yankees only sign one of Lee or Pettitte, they might as well give Nova a chance given that their top alternatives are a league-average innings eater (Garland) and a pitcher Jay described as "the poor man’s A.J. Burnett in a left-handed guise" (De La Rosa), after which you get into guys like Kevin Millwood, Aaron Harang, and what's left of Ben Sheets.

This also leads to trade speculation. Not only because Cashman sounds like he's trumping Nova up as a trade chip with that "and outside the organization" bit, but because a trade might be the best alternative route to improving the rotation. I'm not a big fan of speculating about trades because there's no way we outsiders can have any clue as to what a team might want for a given player or even of that player is really available. I will say that speculation about acquiring Zack Greinke is pointless as he's likely both too expensive in terms of what the Royals would want in return, but also seems likely to block a trade to the Yankees, a team that seems like an awful fit for him given his past social anxiety issues.

Greinke aside, however, I wonder if the Yankees are likely to find themselves in a position in which it might make more sense to sign Jayson Werth and use Nick Swisher or Curtis Granderson as bait for a starting pitcher. I don't much like that idea, beyond the simple risk of being stuck with all three outfielders and no pitcher, or trading for a pitcher then proving unable to land Werth or Carl Crawford, but it's a scenario that suddenly seems all the more plausible.

Meanwhile, Cliff Lee's price goes up with every viable arm that comes off the market. If the Rockies re-sign De La Rosa, as they've said they want to do, or Garland lands elsewhere, Lee could practically name his price.

I have a bad feeling about this.