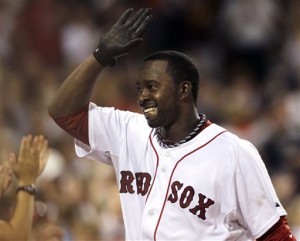 After a nice rebound in Boston, utilityman Bill Hall would make a good fit for the Yankees' bench (AP).

Via Ken "The Hardest Working Man in Showbiz" Rosenthal, the Yankees are reportedly interested in free agent utilityman Bill Hall to serve as a key bench bat. If they were to land him, this would constitute a nice upgrade from the eternal abyss of utter hopelessness offered by futility infielder Ramiro Peña. The 31-year-old Hall, who spent the past season with the Red Sox, has had his ups and downs over the course of his major league career, but he can at least hit his way out of a wet paper sack, which is far more than you can say about Peña.

When starting shortstop J.J. Hardy went down with a season-ending wrist injury the following year, Hall stepped in and walloped a career-high 35 homers in 608 PA to go with a .270/.345/.553 line; he struck out 162 times but drew 63 walks, making it the only season of his big league career in which he cracked the magical 1-per-10 PA mark that right-thinking adults like to see. Convinced they had a good thing — and why not? — the Brewers rewarded Hall with a four-year, $24 million contract in his first year of arbitration eligibility. They just had this one wee favor to ask of him: give Hardy back the shortstop position and learn to play center field, a position where he'd had just seven games of experience.

Hall gamely obliged, and though he played passably in the middle pasture, his bat went flat as he slumped to .254/.315/.425. In a much-needed makeover borne of having one of the majors' most porous defensive units, the Brewers returned him to the infield for 2008, shifting him to the hot corner, moving Ryan Braun, who played the position with the subtle grace of a gorilla attacking a suitcase, to left field, and signing free agent flychaser Mike Cameron to play center. Hall's bat continued to waste away (.225/.293/.396, albeit still with 15 homers); by midseason, he was a platoon player. The problem was that the righty-swinging Hall had suddenly stopped hitting righties, the most fundamental skill required of an everyday player in the majors. Check it out:

That's about as all-over-the-map as you can get, and should be a warning about the use of single-season platoon splits as a definitive statement of skill, but there's a pattern here. In 2005 and 2006, Hall had hit righties with enough pop that you could overlook his lack of plate discipline (.269/.320/.501), particularly when he was slaughtering lefties (.318/.415/.604). But from 2007 through 2009 — when he was traded mid-season to Seattle after another year of failing at the plate — he collapsed against righties (.207/.273/.356), and cooled off markedly against lefties as well (.269/.324/.451). Meanwhile, his platoon differential bounced around all over the place, going form negligible to drastic and back in the space of a couple seasons.

Exactly how this all happened — bad mechanics, playing through injury, arachnophobia — remains a mystery; Hall corrected vision problems via LASIK surgery in in the winter of 2008-2009 and tore a calf muscle that winter as well, but his woes predated that. In those two chunks of playing time, Hall's strikeout rate against righties rose from 23 to 29 percent while his BABIP dropped from .314 to .270; a similar pattern happened against lefties, with his BABIP dropping from .377 to .342. He was particularly vulnerable to power pitching in his darkest hour, hitting just .164/.231/.293 with a .247 BABIP and a 37 percent strikeout rate in 347 PA against them from 2007-2009. He became less willing/able to use the whole field, and more likely to pull the ball. He was a mess.

At some point, Hall began working out in the offseason with Yankee hitting coach and noted resurrectionist Kevin Long, who's done a magnificent job of straightening out both Nick Swisher and Curtis Granderson over the past couple of years. Traded to Boston for Casey Kotchman, Hall found plenty of playing time in left field, at second base and in spot duty at five other positions (including an inning on the mound!) for the injury-wracked Sox, and he turned in a season whose overall line is almost a dead ringer for his career numbers, hitting .247/.316/.456 with 18 homers in 382 PA. Underneath the hood, he had a strong rebound against righties at the expense of a brutal year against lefties, some of which may have had to do with habits developed to succeed in Fenway; he took advantage of his natural pull tendency and hit a lot of fly balls off of and over the Green Monster.

In all, Hall would bring an intriguing skill set to the Yankees, as well as liabilities. Unlike Peña, he can competently fill in at six positions (second, short, third, and the outfield) for weeks at a time in the event another player hits the DL, and he can pop a ball out of the yard every now and then. But he's got a history of contact woes and widely variable performances; anyone who'd be surprised if he were to be suddenly released in June while hitting .141 in minimal playing time because he's suddenly forgotten how to hit to the opposite field hasn't been paying attention. Still, for a few million dollars — and particularly with Long on hand to monitor his swing — he'd be a big upgrade on what the Yankees had on the bench last year.