Brian Cashman's Wonderful World of Nothing

Share All sharing options for: Brian Cashman's Wonderful World of Nothing

My favorite tweet of the last 24 hours came from Barry M. Bloom of MLB.com: "Cashman has lobby scrum. Says he doesn’t expect to get any Yankees business done here. Story to come on MLB.com." My initial reactions were:

1. Thanks a lot, Cashman, for being such a buzzkill. How about making something happen, for goshsakes?

2. So there’s a story to come on MLB.com about Brian Cashman not doing anything. "Come: let us expound on the many varieties of nothing that Brian Cashman will be doing in the next few days.

There would follow a photo essay: Cashman by the pool. Cashman intensely engrossed in a gardening magazine. Cashman with headphones on, staring vacantly into the distance. Next up: the history of an anthill. Buckle your seatbelts! 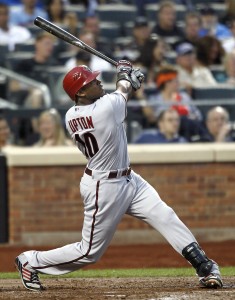 Justin Upton: Talking doesn't cost anything, but is the price of conversation too high for Brian Cashman? (AP)

Cashman is under no obligation to titillate us right now, and perhaps he cannot, given his priorities: re-sign two oldsters and Cliff Lee. We did learn one thing of significance: Leo Mazzone will not be granted an interview for the vacant pitching coach position: "Leo turned down the Yankee job once. He was offered the job before Gator, and he went to Baltimore." Beware the wrath of a general manager scorned.

What seems most interesting at the moment is not what Cashman is known to be thinking about, but what might be presented to him at these meetings. There are many interesting names being bandied about in the press right now that could cause a man to rethink his priorities. Let me give you an example: what if Justin Upton is on the market? Think about it: Upton is a young power hitter with good speed in the outfield. He’s already a veteran at 23, is likely still a few years away from his peak, and is signed until 2015. Contrast that with Brett Gardner, who is 27. By 2015, Gardner could be out of the major leagues. Gardner is cheap and he has two great skills in speed and patience, but a guy who hits 26 home runs in the major leagues at the age of 21 has a well of potential that Gardner does not.

If you’re Brian Cashman, busy doing nothing in Orlando (as long as you’re near Disney World, Brian, head over to Adventureland and grab yourself a Dole Whip—you can’t beat pineapple ice cream) and your old pal, Diamondbacks GM Kevin Towers moseys over, gently removes one of your earbuds, and says, "Hey, Brian, let’s talk some Upton," do you say:

(A) "Sorry, dude. You know our outfield is already full up with the relatively cheap, and productive Misters Swisher, Granderson, and Gardner," or

Naturally, you go with B, because there’s no harm in talking. Isn’t that what the Wolf said to Little Red Riding Hood? Well, most of the time it’s true. But do you really mean it? Do you start thinking that you might change your plans because you could control a former and future All-Star for the next five years?

I want to emphasize that this is just a hypothetical. If you read the article linked above, it doesn’t sound like Towers is eager to move his young star. Rather, he’s saying that he’s willing to talk about anything: "We got more hits on Upton and [Stephen] Drew. They're difficult to move, but sometimes to make your club better, you have to move good players. You never know when a deal might present itself."

(I will spare myself your wrath by delicately skipping past the idea that the Yankees need a young shortstop and that Drew will be 28 next year. I actually feel pretty comfortable doing that, because Drew isn’t a particularly good glove and his bat is largely a product of his home park.)

The Yankees have young pitching. The Diamondbacks desperately need pitching of all flavors. So might they make a deal "present itself," and not just with Upton but other young stars who might be available? Cashman has a plan, the plan of nothing. In military strategy, it is said that no plan survives contact with the enemy. So too with enemy general managers. If someone dangles something tasty, does Cashman discard his closely planned nothingness and improvise, or does he stick to it? Is the winter to be all about players who will be 32, 37, and 41 next year, or will the opportunity to become simultaneously younger and better present itself? Which call do you answer, the slow and steady of a ballclub with arteriosclerosis, or break the chains of the past and gallop eagerly into the future?

As Eric Idle says during the singalong that concludes "The Life of Brian," "You know, you come from nothing, you’re going back to nothing. What have you lost? Nothing!" Cashman has put himself in the same position. Expecting nothing, he will likely get nothing. I suppose if he’s not interested in being proactive—and what he said yesterday, "We've got a lot of good things [on the big league club] and we've got a lot of good things coming [in the organization]… So it's not like two years ago when we really needed to secure certain things to set up our future. I think our future is good either way. It's just going to be better with certain additions," is about as far from proactive as you can get—I can live with it. What I want to know is if he will be reactive when he hears that his colleagues are willing to deal.