Waiting on a Friend

Share All sharing options for: Waiting on a Friend 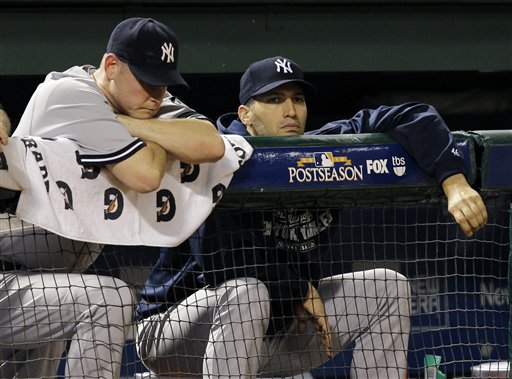 There's no guarantee as to whether Andy Pettitte is coming back for more (AP).

Last week's news about the Yankees' potential interest in mid-tier free agent starter Jorge de la Rosa came into focus with the latest news from Andy Pettitte. The 38-year-old lefty told a Houston TV station that he has yet to make up his mind about returning for one more season, that if he does, it will be with the Yankees, but it will be his final season. Pettitte cited the pull of family: "Right now, I can tell you my heart's right here in Deer Park [Texas]," he told KHOU-TV. "If something happens and I play one more year that would be it. My kids are getting older and one's going to be out of high school real soon, and I'm not going to miss his whole high school."

I already took Pettitte's Hall of Fame case for a spin during the ALCS, so we'll save further encomiums for him for when he makes an official announcement. We know that he can still pitch at a high level; he was off to one of the best seasons of his career, with a 2.70 ERA supported by strong peripherals and aided by a .268 BABIP through the first half of the season before a groin strain felled him, limiting him to just four regular season starts the rest of the way. His two postseason starts hearkened back not only to his first-half success but to his lengthy track record of postseason success — the lengthiest of any major leaguer in this era.

Pettitte's retirement would put more pressure on the Yankees to sign not only Cliff Lee but also a second free agent starter, though of course, it would free up some money to do so. Dandy Andy made $11.75 million in 2010, and if you go back to my payroll worksheet from a couple weeks back, what that means is that in order to come in with an opening day payroll similar to years past ($206.3 million last year, never higher than $209 million), the Yankees would now have to fit the salaries of Derek Jeter, Mariano Rivera and the two new starters into about $50 million of salary space. They could backload the deal for Lee somewhat to account for the eventual shedding of both Rivera's salary and that of Jorge Posada, who has one more year, but it's still a difficult task to envision unless you assume Jeter and Rivera will take substantial pay cuts from the $34.1 million they combined to earn in 2010.

As for the identify of that second starter, Cliff identified Jon Garland, Jake Westbrook, Hiroki Kuroda and de la Rosa as the most desirable candidates; since then, news has broken to suggest that Kuroda will return to the Dodgers. There are a whole lot of question marks in the group of free agent pitchers beyond that, but some of them are guys you wouldn't invite over to dinner — Carl Pavano and Vicente Padilla come to mind — let alone into your rotation. Of course, there's also the trade market, if not the plan to return you-know-who to starting.

In the wake of my piece on de la Rosa, one commenter asked about my assertion that with an average fastball velocity of 93 MPH and the ability to reach 96, he had rare velocity for a lefty. I did a bit of research on this and answered it in the comments, but it's good enough to share in a more widely-read format.

Last year there were 85 pitchers who threw at least 50 innings and had fastballs which averaged at least 93.0 MPH. Based upon the fact that about one-third of the population of pitchers who threw 50 innings were lefties (79 out of 239), we'd expect 28 of those 85 heat-throwers to be southpaws. Instead, just 11 of them are. One of them's a Yankee, one's an ex-Yankee, and two of them are pitchers for the Yankees' biggest rivals:

That's pretty surprising, isn't it? The reason so few lefties throw that hard isn't genetic or physical, it's simply that the pool of them is much smaller. While there are no official statistics telling us what percentage of the population is lefties, it's believed to be about 10 to 15 percent. Twenty-seven percent of all pitchers to take a major league mound in 2010 were lefties, and as noted above, 33 percent of the ones to toss at least 50 innings were, which means you're digging deeper into the population of portsiders to fill out major league staffs (thank the matchup-obsessed Tony LaRussa). Given a normal distribution of velocities in that population, you're more likely to find ones who don't throw as hard.

All of which points to why major league teams have found de la Rosa so tantalizing over the years, and why major league hitters have found him so tough to hit during those rare stretches when everything's in working order. But just because de la Rosa's tantalizing doesn't mean he can be consistently effective to the extreme that the Yanks will need him to be, particularly if it means filling the big shoes of Andy Pettitte.