The Tools of Ignorance: Saturday News

Share All sharing options for: The Tools of Ignorance: Saturday News

Here's the thing: with the 2009 ring on his mantle and having missed half the season on the DL, this time, I believe him. 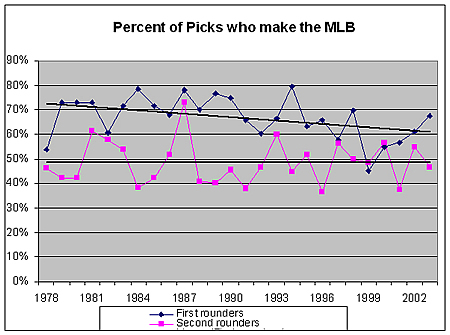 So what's the Yankees' plan B? They kicked the tires on Rockies sinkerballer Jorge De La Rosa, a Type A free agent.  Remember that one of the reasons the Yankees were willing to sign Tex was that they'd already tossed away their first round draft pick on Sabathia and their second rounder on AJ Burnett.

This Prospectus article reminds us that less than 70% of first round picks ever make the big leagues.  It's 50% for the second round, and it drops farther after that.

If you're going to jump into signing Type A free agents, it's best to do it in a year you're willing to go after more than one because, frankly, the price on the farm system drops sharply.  If the Yankees don't get Cliff Lee, I say don't touch any of the Type As. But if the Yankees sign Lee and there's still money in the budget because Andy retires, well then, why not?

Who said it? Someone in the Ranger clubhouse? A friend from the Indians, Phillies, or Mariners? Brian Cashman?

I love the offseason.

In real, confirmed news, the shorter exclusive negotiating window this year has made all of baseball speed up the Hot Stove:

"I’m fielding offers now," Boras said, "where I wasn’t before."

Other agents said they were getting a surprising number of hits on high-end players from teams that normally bottom-feed this time of year, and while making a phone call isn’t the same as pulling the trigger or bidding with the big boys, there’s something to be said for participation.

I like a faster offseason, if for no other reason it gives me something to write about in the middle of November.  I also think that firing up the Hot Stove sooner after a great World Series is a good way to hold the attention of more casual fans.