This Backup Plan Is Anything But Rosy

Share All sharing options for: This Backup Plan Is Anything But Rosy

Earlier this week, the Yankees began their campaign to woo Cliff Lee, with general manager Brian Cashman flying down to Arkansas to meet with the pitcher, his agent, and his family, notably the notorious Kristen Lee, who took issue with her treatment by the natives during the ALCS. It's unclear whether Cashman actually made an official offer; if he has, the Lee camp has remained admirably tight-lipped. But one is coming, and given the Yankees' prioritization of starting pitching, you can expect a shock-and-awe effort to blow any competing offer away with cold hard cash. 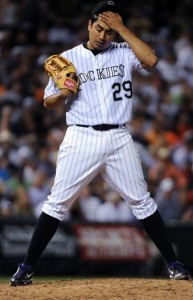 As a fallback option beyond Cliff Lee, the erratic Jorge de la Rosa is risky enough to create a lot of headaches (AP).

Nonetheless, there exists a finite possibility that Lee signs elsewhere. The Rangers have a new ownership situation, a new television contract, a home state with no income tax, and a ballclub that reached the World Series with Lee's help, and they may be willing to go to the mattresses to keep their ace. The Angels are always a threat to throw big money around, and the Tigers have shed a boatload of bad contracts and have money to play with as well. None of those teams may be able to go dollar for dollar with Lee, but as I've discussed before, the Yankees have other priorities — namely retaining Derek Jeter, Mariano Rivera and Andy Pettitte — which will pinch the portion of the budget which is available to sign free agents, and until the ink is on the contract, nothing is certain. Furthermore, nothing is certain about the return of the 38-year-old Pettitte, who flirts with retirement on an annual basis and has played the last four seasons on one-year contracts.

So quite understandably, the Yankees must explore other options as well. The latest word via the New York Daily News' Mark Feinsand is that they're interested in Jorge de la Rosa, a 29-year-old lefty who's spent the last three years pitching for the Colorado Rockies, and who's always been seen as a pitcher with outstanding stuff and incredible upside but erratic control. Cliff mentioned him in his rundown of the free agent market for starters, but since he's in the headlines, some more detail is merited.

A non-drafted free-agent signed by the Diamondbacks out of Mexico back in 1998, de la Rosa passed through the hands of the Snakes not once but twice, also taking detours to the Mexican League's Monterrey Sultans, the Red Sox, the Brewers, and the Royals en route to Colorado. He's been part of the package in trades for Curt Schilling, Richie Sexson, Tony Graffanino and Ramon Martinez, which hints at the volatility of assessments of his talents. To say nothing of the volatility of his personality. "Once labeled the 'Mexican John Rocker' by former Red Sox GM Dan Duquette, who had signed de la Rosa out of the Mexican League at age 19," begins the assessment in Baseball Prospectus 2005, "He was one of the main pieces of the Curt Schilling and Richie Sexson trades. His bad boy persona has faded the past two seasons as he focused on getting his mid-90s fastball to the major leagues. He spent the majority of 2004 pitching at Triple-A, posting a solid strikeout rate but a mediocre ERA, thanks to inconsistent control and a propensity to give up the long ball."

Before de la Rosa got to Colorado, he put up some astronomical numbers as a palooka at the back end of the Brewers' and Royals' rotations and/or bullpens. From 2004 through 2007, he was strafed for a 5.85 ERA in 274 big league innings while allowing 1.2 homers per nine, walking an astounding 5.2 per nine, and striking out just 6.4 per nine, numbers that are just cringeworthy. It wasn't until he reached Colorado in late April 2008 that he began to put it all together. He improved his mechanics to gain an extra couple of ticks on his fastball, which now averages about 93 MPH and can touch 96, rare velocity for a lefty. He backed away from his curve (largely neutralized in the thin air) in favor of a slider, and honed a changeup. Both offspeed pitches generate high swing-and-miss rates (22 percent) as well as an increasing number of groundballs, which is how he survives pitching half his games at Coors Field. His 53.8 GB% was the sixth-highest in the NL among pitchers with at least 120 innings.

Alas, de la Rosa didn't throw much more than that last year, making just 20 starts and missing two and a half months due to a strained flexor tendon in the middle finger of his throwing hand. He put up a 4.22 ERA and whiffed 8.4 per nine but he also walked 4.1. Those are fairly typical numbers for his stay in Colorado: a 4.49 ERA with 4.1 BB/9 and 8.9 K/9, not to mention 1.0 HR/9 despite the grounders. His home/road splits during that time actually haven't been that drastic (4.73/4.19), which suggests his upside isn't quite as high as you'd hope taking him out of Colorado. Another problem is that he's averaged just 146 innings over that three year span, maxing out at 185 innings in 2009. Given how deep into counts he runs, he's unlikely to become a workhorse anytime soon.

What we have here, in short, is the poor man's A.J. Burnett in a left-handed guise. Those rocky numbers are the combination of some fantastic stretches with some awful ones, particularly early in the season; in his three years in Colorado, de la Rosa's posted a 5.82 ERA prior to the All-Star break, and a 3.56 mark after it. Through July 17 of last year — a span covering just his first six starts due to the finger injury — de la Rosa had a 6.16 ERA. From that point to the end of the year, a span of 14 starts, he put up a 3.56 ERA with 11 quality starts. Go back to 2009 and the story is similar: a 3.16 ERA through his first seven starts, an 8.38 ERA through his next eight, and a 3.39 ERA from July onwards, the best stretch of his major league career. Even then he was walking 3.9 per nine to go with his 9.2 strikeouts per nine, the kind of thing that can give fans an ulcer, let alone a manager.

In short, de la Rosa's a pitcher of drastic ups and downs who has yet to prove his durability. Somebody, somewhere may make him a particularly wealthy man this winter, but whoever does so will be making one of the riskiest bets on the free agent pitching market, particularly given that he's a Type A free agent who will cost a first-round draft pick. The Yankees have one of those high-risk pitchers already in Burnett, and and after a solid 2009, he spent the past year burning them. If they must dip into the waters beyond Lee, they need a pitcher who can provide a more stable certainty, an innings-eating Jon Garland or a Hiroki Kuroda. Even better, it would be a fantastic excuse to give Joba Chamberlain another shot at the rotation; he walks far fewer hitters (2.8 per nine last year) and gives up far fewer homers (0.8 per nine) than de la Rosa. Signing the latter — who isn't necessarily Plan B, mind you, but is clearly Plan n — would be spending money just for the sake of spending money, and while it wouldn't cost anywhere what Lee would cost, the Yankees can do a whole lot better.