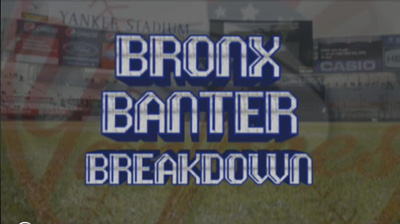 Somehow it slipped through the cracks due to a problem embedding video here, but earlier this week, Steven Goldman and I sat down with our pal Alex Belth and recorded four snappy "Bronx Banter Breakdown" video segments. Three of them have aired already: in Part I we discuss the rotation, the pursuit of Cliff Lee, and the other big-name free agents, in Part II, we cover the Derek Jeter contract saga, and in Part III, we look back at some of the positive stories of the Yankees' 2010 season. Part IV will air Monday.