Share All sharing options for: Will Cooperstown Call for Yankee Quartet? (Part II) 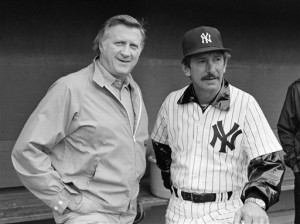 Earlier this week, before Pinstriped Bible morphed into FireDerekJeter.com (kidding, of course), I took a look at the two ex-Yankee players on the Expansion Era Hall of Fame ballot which was announced on Monday. To recap, this ballot covers players and non-players whose primary impact on the game was from 1973 onward. It will be voted upon by a 16-member panel in a fashion similar to the pre-2001 Veterans Committee, with 12 votes needed to obtain the necessary 75 percent required for election. The Expansion Era is one of three eras which will be considered on an annually rotating basis, the others being the Golden Era (1947-1972) and the Pre-Integration Era (1871-1946). There's plenty of room for quibbling with the process, the way they've divided up the timeframes, and the notion that players not deemed worthy by the BBWAA writers should be given an additional route of entry into the Hall, and earlier this week and several times elsewhere in my work at Baseball Prospectus over the past several years, I've done just that.

In any event, two major figures from the Yankee family are among the four non-players on the ballot, and as I said before, it's a pairing straight out of the classic Miller Light TV commercial, George Steinbrenner and Billy Martin, both now deceased. The standards for managers and owners aren't nearly as neatly quantifiable as those for players are, but I have spent some time over the years trying to understand them, so I'll share that knowledge with you here, today regarding Martin.

Over the course of 16 (sometimes partial) seasons as a manager spread out from 1969 through 1988, Billy Martin compiled a 1253-1013 record, good for a .553 winning percentage. Among skippers who managed at least 1500 games in the big leagues — an arbitrary cutoff roughly approximating almost 10 seasons of managing but leaving room for some midseason hiring and firing variance — he ranks 16th all-time, with 12 of the 15 guys above him in the Hall of Fame, a few as much for what they did as players as what they did as managers. Raise the bar to 2000 games, a level of experience only 50 other skippers reached, and he rises to 13th, with 11 above him in the Hall and one more (Bobby Cox) a lock; Davey Johnson is the other. Right there is the first strong argument that Martin belonging in Cooperstown.

Furthermore, Martin ranks 20th in terms of games above .500, with everybody above him who's not already in the Hall headed there eventually except perhaps for Johnson: Cox, Tony LaRussa, Joe Torre, all active as of this season, though both Cox and Torre have since retired. Several Hall of Famers are below him in terms of both winning percentage and games above .500, including contemporaries Tommy Lasorda, Whitey Herzog, and Dick Williams. Earl Weaver is above him on both counts, and Sparky Anderson is in games above .500 but not winning percentage. There we've got another major point in Martin's favor, particularly given quibbles that his career as a manager may have been too short.

Martin's career exactly coincided with the dawn of division play, which doubled the number of playoff teams per league from one to two; as late as 1968, the team with the best record in the league went to the World Series, and the rest went golfing or hunting or whatever. Martin's teams made five postseasons while he was still at the helm — 1969 with the Twins, 1972 with the Tigers, 1976 and 1977 with the Yankees, and 1981 with the A's, in a year cleaved in two by the players' strike with the field of postseason teams thus doubled. Of course, Martin's 1978 Yankees would go on to win the World Series, but only after he was fired in midseason with his team 10 games above .500 (52-42) but 10 games behind the Red Sox; they were 14 back earlier that week before winning five straight; in any event, that one isn't counted in his total.

Overall, those five playoff appearances are tied for 15th, but the era is important; Anderson (seven in 26 seasons), Lasorda (seven in 21), Weaver (six in 17) and Herzog (six in 18) had more, Williams (five in 21) had as many. All managed longer, some of them considerably so, because they were all more successful in the art of job-keeping. All won more pennants than Martin's two, and only Herzog and Weaver had as few as one world championship.

That's the crux of the problem with Martin's case, and it owes to the man's tempestuous and tormented nature, the insecurities, alcoholism and penchant for self-destruction which led him to battle with owners and brawl with players and wear out his welcome time after time after time. He was fired after his inaugural season in Minnesota, in which he'd won a division title, because in August he'd beaten up ace pitcher Dave Boswell to the point that the latter needed 20 stitches. After pushing the Tigers to 91 wins, 12 more than the year before, in his first year on the job, he won a division title in his second year, one where the players' strike ate up the first week or so of the season. Those games were never replayed, causing the 85-70 Red Sox to lose by half a game against the 86-70 Tigers, the single worst scheduling screwjob in baseball history (our own Cliff Corcoran wrote about this at length in It Ain't Over: the Great Baseball Prospectus Pennant Race Book, which Steven edited and to which I contributed). Martin was fired from the Tigers job late in 1973 after ordering his pitchers to throw at Indians hitters in retaliation for Gaylord Perry's spitballs.

Almost immediately he landed a job with the Rangers, who'd gone 48-91 under Herzog and his interim replacement, and while the team finished with a godawful 57-105 record, they vaulted to 84-76 the next season, their first winning campaign in Texas. Again, by the middle of the next season he was gone as the team underperformed, and again, he landed a job almost immediately, this time with the Yankees, who'd fired Bill Virdon in-season. Mike Shropshire's hilarious account of the mid-Seventies Rangers, Seasons in Hell, suggests that once Martin saw the writing on the wall for Virdon, he actually worked to wear out his welcome in Texas by exacerbating conflicts with his players in an effort to free himself to come home to the Bronx and the one job that mattered more to him than any other: manager of the New York Yankees. Martin had spent the bulk of his 11-year career in pinstripes, and it was for the Yankees he'd enjoyed his brightest moments, particularly when it mattered: he hit .333/.371/.566 with five homers in the four World Series in which he had an at-bat (the other one, 1951, one in which he was limited to a pinch-running appearance). The Yankees won three of those four series, and had a series MVP award been given back then (they began in 1955), he'd have won at least one.

Martin's task was to restore glory to a franchise which hadn't been in a World Series since 1964, and he did so in short order, taking the Yankees to the AL pennant in 1976 and winning the World Series the following year, then getting fired before they could complete that task again. In a twisted love-hate relationship with Steinbrenner, he would go on to be hired and fired four more times by the Yankees, completing just one full season and never taking them to another postseason despite racking up 91 wins twice (once in just 145 games); amid that turmoil, he spent three years at the helm of the A's, turning them from a 54-108 last place sad sack to an 83-79 dynamo in his first year at the expense of his starting pitchers' arms; that team completed 94 games, the highest total since integration (1947 onward) and one of the 12 highest totals of the live ball era (1920 onward). During the strike-torn 1981 season, the A's made the playoffs, but they sank to 68-94 the following season when the pitchers he'd ridden so hard in the previous two years began breaking down.

In all, Martin's was a complex career full of drama, but he was a master at turning teams around on a dime. The 1968 Twins, 1970 Tigers, 1973 Rangers, 1975 Yankees and 1979 A's combined for a .429 winning percentage in the season before or in which Martin took over (not including his own stints). In his first full season on the job, those teams won at a .571 clip — the equivalent of a 23-win improvement — with two of the five making the playoffs. In the second, they won at a .563 clip, with three of them making the playoffs. In the third season, or the part he managed, they slumped to .490. There was never any fourth season at any stop, for the reasons I've stated above.* He was not a man for the long haul.

That's a hindrance when it comes to comparing Martin to peers like Weaver, Lasorda and Anderson, who spent epic stretches with one or two teams, but it's an impressive track record nonetheless. I'm thoroughly convinced Martin belongs in Cooperstown, for all of his failings. He was a tormented son of a bitch, but he could give a ballclub the kick in the ass it sorely needed to win like perhaps no other manager before or since. That's a Hall of Fame skipper.

*Incidentally, after initially publishing this article, I went back and compared the with Martin/without Martin numbers for the Yankees from 1975 through 1988. Martin won at a .591 clip, the rest — Virdon, Bob Lemon, Dick Hoswer, Gene Michael, Yogi Berra, Lou Piniella, Clyde King — were at .548, a difference equivalent to seven wins per year.