If Not Cliff Lee, Then Who?

Share All sharing options for: If Not Cliff Lee, Then Who? 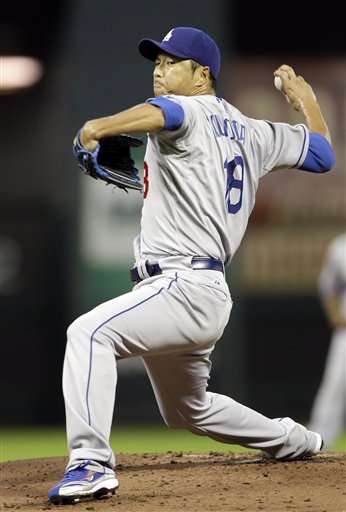 Free agent Hiroki Kuroda could be a key cog in a Cliff Lee-free 2011 for the Yankees. (AP)

Heading into this offseason the Yankees greatest area of need is their starting rotation. Don't believe me? Take a look at the current construction of their roster. Even without Derek Jeter, the lineup is strong:

Put Jeter back in and the only real change is replacing last year's revolving designated hitters with Montero, which has the potential to be a big upgrade, particularly as the Posada/Montero DH/catcher combo has the potential to scrub out the majority of those Francisco Cervelli at-bats.

I've already taken a look at the bullpen. I think the Yankees should add a set-up man there, but, assuming Mariano Rivera's return, what they have now is solid:

The bench is a bit sparse--the only non-rookies there right now would be Cervelli and Ramiro Peña--but Brian Cashman has already said that would be his last concern this offseason and might even be something he'll wait to address in-season, as he has the last two years with the deadline additions of Lance Berkman, Austin Kearns, Eric Hinske, and Jerry Hairston Jr. That can be frustrating, but it's also appropriate as the bench, particularly in this age of 12-man pitching staffs, is the least important sub-section of the roster.

Which brings us to the starting rotation, which currently looks like this:

That is not a championship rotation by any stretch of the immagination. I do expect better things from Sabathia, Hughes, Burnett, and Nova (whatever his role) in 2011--Sabathia because the torn meniscus in his knee made him inconsistent down the stretch when he's usually at his most dominant, Hughes because of where he is on the experience/learning curve, ditto Nova, and Burnett because he couldn't be that bad again, could he?--but it's clear the Yankees need some reinforcements here.

The obvious targets are Andy Pettitte and Cliff Lee. I do expect Pettitte to return, but if he doesn't, and if Lee opts to stay in Texas, the Yankees will need to broaden their search. So who else is out there? Who should be part of Plan B for the Yankees' 2011 rotation. Here's a quick look at the available free agent starting pitchers.

First, other than Lee and Pettitte, there are just 26 free agent starting pitchers on the market, and nearly half of that list is comprised of long-shot gambles, pitchers whose careers have been derailed by injuries who might be lucky to get more than a non-roster invite to spring training with a good team. That list includes Brandon Webb, Ben Sheets, Chris Young, Jeff Francis, Justin Duchscherer, Erik Bedard, Jeremy Bonderman, Mike Hampton, Freddy Garcia, Kris Benson, and Chris Capuano. None of those pitchers is guaranteed to be an upgrade even on replacement-level filler such as Moseley, and several of them are better bets to be worse or simply unavailable due to further injury issues.

That leaves 15 men, one of whom is Carl Pavano, who is also a Type-A free agent, as if the Yankees needed another reason to disregard him, and another of whom is Javier Vazquez. Now we're at 13 pitchers and there's still some dead weight in there. Fill in the blank in this sentence with the following names and see how it makes you feel:

Having failed to land Cliff Lee, the Yankees have just signed ________ to reinforce their 2011 rotation.

Above that trio is the cluster of pitchers with the reputation of being league-average innings eaters, none of whom managed a league-average ERA or more than 190 2/3 innings pitched in 2010. Those five are Kevin Millwood, Doug Davis, Aaron Harang, Vicente Padilla and David Bush. Of that group, Davis made just eight starts due to a heart ailment and nerve transposition surgery in his pitching elbow, and Padilla is a mortal enemy of Mark Teixeira.

So now we're down to five pitchers and have yet to find one the Yankees should even consider as an alternative to Lee or Pettitte. First up on that list is one of the men I suggested the Yankees consider for their bullpen, Hisanori Takahashi. In his final three seasons in Japan, Hisanori averaged 25 starts a year for the Yomiuri Giants while posting a  3.18 ERA, 1.23 WHIP, and 3.11 K/BB. Those are solid numbers, but he started just 12 games for the Mets as a major league rookie this season and posted a 5.01 ERA in those starts (compared to his 2.04 mark coming out of the pen).

That leaves four candidates for Plan B, none of whom is especially inspiring.

First up is Jon Garland, who is coming off a season in which he was a key part of the Padres' surprising success, though it's worth noting that after adjusting for the pitching-friendly environment of Petco Park, his 3.47 ERA in 2010 works out to a just-above-average 106 ERA+. Garland is the definition of a league-average innings eater. He doesn't strike many men out (4.9 K/9 career), has good but unexceptional control (3.0 BB/9 career), and has a fairly conventional groundball/fly-ball split. There's nothing compelling about him at all, but over the last nine seasons, seven of which saw him pitch for an American League team, he has averaged 204 2/3 innings a year, never throwing less than 190, and posted a 105 ERA+, never seeing that mark dip below 91 in a single season. Given the strength of the Yankee lineup, they could do worse than a pitcher like Garland, a 31-year-old who hasn't missed a start in nine years and will almost always keep his team in the game.

Next on the list is former Yankee Jake Westbrook. Westbrook was involved in two of Brian Cashman's more notable trades, coming to the Yankees with Ted Lilly for the used up remains of Hideki Irabu, then being flipped to the Indians six months later in the David Justice deal. Westbrook spent the better part of five seasons as a reliable, league-average, innings-eating groundballer in the Cleveland rotation from 2003 to 2007, posting a 4.11 ERA (107 ERA+) while completing 11 games, three of them shutouts (he led the league once in each category). Tommy John surgery derailed him in 2008 and cost him all of 2009, but he returned to his old form in 2010. After shaking off some rust in April, he posted a 4.03 ERA over his final 29 starts and was acquired by the Cardinals at the trading deadline. At 33, Westbrook is just a year older than his former rotation-mate, Lee, and his groundball tendencies would make him a good fit for the homer-happy new Yankee Stadium.

Next is Jorge De La Rosa, whom some Yankee fans might remember from his year and a half with the Royals. When De La Rosa was traded to the Rockies after the 2007 season, he had a career ERA of 5.85 to go with a 1.23 K/BB and 15-23 record, but he matured in Colorado, reducing his walks while maintaining his always-strong strikeout rates and inducing an increasing percentage of ground balls. The result is a lefty who won't turn 30 until April and has the strikeout/groundball combo that is ideal for Yankee Stadium.

The catch is that De La Rosa is a Type A free agent and the Rockies, who are interested in re-signing him, seem likely to offer him arbitration.  It's easier to rationalize giving up a draft pick for a starting pitcher than for a reliever (the Yankees will have to surrender one if they sign Lee), but De La Rosa has never posted an ERA below 4.22, walked at least four men per nine innings in each of this three seasons with the Rockies, only once made 30 starts in a season (a torn tendon in the middle finger on his pitching hand cost him about a dozen starts this year and he didn't establish himself in to Rockies' rotation until the middle of the 2008 season), and has never thrown 190 innings in a season as a professional. As much promise as De La Rosa has shown, that promise alone isn't worth the additional gamble of a first-round pick.

Which brings us to the last man on the list, Hiroki Kuroda. Bucking the conventional wisdom that Japanese pitchers tend to struggle in and beyond their third year in the majors, Kuroda had his strongest major league season in 2010, posting a 3.39 ERA (113 ERA+), 1.16 WHIP, and 3.31 K/BB in 31 starts for the Dodgers. His strikeout rate has increased each of the last two seasons, and his strong ground-ball rate has held steady. Overall, he has posted a 3.60 ERA, 1.18 WHIP, and 3.18 K/BB in three major league seasons and was excellent in two of his three postseason starts (though he was absolutely lit up in the third). The concerns about Kuroda are his age, he'll be 36 in February, and the fact that he has assembled his numbers in a pitching-friendly ballpark in the weaker league.

Andy Pettitte on a one-year deal is, to me, clearly preferable to any of the above. Cliff Lee, meanwhile, comes with the concerns and baggage of a major, multi-year contract, if he comes at all. One thing I hadn't thought of regarding Lee was brought to my attention by an appearance by Texas Governor Rick Perry on "The Daily Show" this past Monday. Perry mentioned proudly that Texas's lack of personal income tax was going to be "the reason Cliff Lee is going to stay in Texas." Of course, Perry thought he was appealing to the crowd, forgetting that he was in mid-town Manhattan in front of an audience largely comprised of Yankee fans. He also forgot that players for east coast teams typically set-up residence in Florida, where their teams hold spring training and where there is also no income tax. Still, that's an extra point in favor of the Rangers, who I still think have at least a 50 percent chance of retaining their ace, leaving the Yankees to chose something from column B. If Andy Pettitte is also convinced to stay home in Texas, the pitchers above could suddenly become crucial to the Yankees' 2011 season.