That was an actual headline on ESPN New York on Tuesday. Wallace Matthews "broke" the story:

After reading that, I spent the remainder of the afternoon searching ESPN-NY for news that the Yankees would wear pinstripes in 2011. Apparently the unnamed sources aren't willing to come forward on that topic just yet. 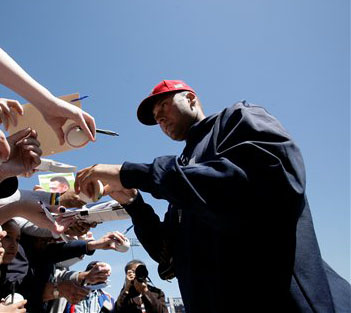 Whatever deal Derek Jeter signs next will tilt heavily in his favor. (AP)

We all know the Yankees are going to re-sign Derek Jeter, and we all know they're going to overpay him. (And, for the record, I actually credit Matthews for taking those facts mainstream, even if I could barely read his article past the glare of the neon sign flashing "SLOW NEWS DAY" hanging above it.) We've done plenty of hand-wringing about Jeter's next contract already in this space, but it's hard to modulate our outrage appropriately given that we don't yet know exactly how much Jeter is being overpaid. For that reason, I thought I'd use a couple of dollar-based metrics to evaluate both Jeter's just-completed contract, his performance over the last couple years, and his potential worth over the next two to I guess six seasons.

Let's start with something that has been largely overlooked thus far in all of the complaining about how Jeter won't be earning his next contract, which is whether or not he really earned the last one. FanGraphs has a player-value statistic called "Dollars," which attempts to derive a player's market value for a given season. It does this by determining how much the 30 teams spent per marginal win the previous offseason and multiplying that dollar figure by the player's on-field value in Wins Above Replacement in the season in question. It's a blunt tool made all-the-more problematic by the use of FanGraphs' WAR, a total value stat I place little faith in due largely to the heavy weight it gives defensive value as determined by the problematic Ultimate Zone Rating, which among other things doesn't rate catchers at all and is largely useless for first basemen. Still, it can give us a rough idea of how Jeter's performance over the last nine years (his contract began in 2001, but Dollars only goes back to 2002) was worth in actual dollars.

Here's a quick chart comparing Jeter's actual annual salaries (including his signing bonus, which was paid out in biannual installments of $1 million from 2001 to 2008) with his Dollars rating (all amounts in millions):


Jeter may only have been worth as much or more than what he earned in two of the last nine years, but the cumulative figures there suggest Jeter earned his keep. The total difference of $24.3 million over nine years breaks down to $2.7 million a year, less than the Yankees have spent on Damaso Marte in each of the last two seasons and less than half of what they spent on Nick Johnson in 2010. Consider how heavily WAR weighs fielding, which is surely to Jeter's detriment in this accounting, as well as Jeter's contributions in the postseason (.314/.377/.498 in 69 games including four League Championship Series, two World Series, and one championship), and as the team's most marketable star, if not the sport's for most of the last decade, and one could easily argue that he's been worth that extra $2.7 million a year.

So Derek Jeter doesn't owe the Yankees anything, nor, by the same token, do they owe him. The relationship between player and team was mutually beneficial and surprisingly price-effective over the length of his last contract (just eyeballing things, having the Dollars figure for his 2001 season likely wouldn't have pushed the overall cost/benefit analysis in either direction). With that in mind, the negotiations over his new deal should be conducted without consideration for his past performance as the ledger is well balanced coming into this offseason.

Of course, just because they should doesn't mean they will. They almost certainly won't. Still, what if Jeter and the Yankees actually worked out a deal that would pay him what he's likely to be worth over the next howevermany seasons. What would that look like?

For that we can turn to Baseball Prospectus's MORP, or Marginal Value Above Replacment Player, a statistic not dissimilar to Dollars introduced by Nate Silver in 2005. The biggest difference between MORP and Dollars is that in introducing Dollars, FanGraphs' Dave Cameron asserted that player salaries escalate in a linear fashion, with each win having roughly the same value as the one below it no matter how many wins a player is worth. Silver, however, argued that salaries escalated non-linearly, with teams willing to pay more for each successive win. That favors Jeter, as does the use of Baseball Prospectus's WARP (Wins Above Replacement Player) to translate total player value into wins. An ancestor of WAR which I still favor, WARP doesn't weight fielding nearly as heavily as WAR. That also favors Jeter. Consider Silver's 2005 value for Jeter. While Dollars had Jeter as worth $15.4 million on the open market in 2005, Silver and MORP had him worth just over $20 million. That's a big difference which could be used to make the argument that Jeter was actually underpaid over the past decade. If so, maybe Jeter is entitled to a bit of a prestige tax in his new deal.

Still, setting that aside, let's see what MORP says about Jeter's future worth. While the way MORP is figured may favor Jeter, the PECOTA projections that give us the future WARPs from which it is figured do not. To set the baseline, Jeter was worth 6.0 WARP in his MVP-quality 2009 campaign, but just 3.1 WARP in his dismal 2010 season, a figure actually far from his career low likely due to the quality of his shortstopping peers in 2010 relative to, say, 2003, when he was worth just 1.6 WARP and Alex Rodriguez, Nomar Garciaparra, and Miguel Tejada were all still star shortstops in the league.

The PECOTA projections currently on the Baseball Prospectus site were made prior to the 2010 season. That is, they were made after that MVP-quality season, not the dud that followed. PECOTA projected Jeter to be worth 2.4 WARP in 2010 (not far off), roughly the same in 2011 (2.3), after which it expects him to suffer a steep decline from 1.4 WARP in 2012 at age 38, to 1.1 in 2013, to less than a win thereafter. Using MORP his projected value in dollars over the next six seasons looks like this (all amounts in millions of dollars rounded to the nearest hundred-thousand dollars):

In 2016, at the age of 42, PECOTA expects Jeter to be a sub-replacement-level player worth less than the major league minimum. That (or an implicit understanding of that) is why Steve reacted so strongly against the rumors that Jeter is seeking a six-year contract that will make him a Yankee until the age of 42, just as Alex Rodriguez's contract will. Rodriguez, incidentally, is projected to be worth $1.7 million in the final year of his contract, which seems solid until you realize he'll be making $20 million that year. That incongruous deal given to Rodriguez is what is throwing off much of the Jeter speculation, but, again, let's try to deal just with Jeter and his actual value for the immediate future.

If the Yankees sign Jeter for $20 million a year for two years, a contract I think every Yankee fan and executive would be shocked and delighted to see Jeter settle for, they'd still be paying him almost double what he's likely to be worth. The same salary over three years would be still roughly double his value, but in that case more than double. Anything beyond that is so far out of range as to be totally detached from anything he might be able to contribute on the field.

I include his pursuit of 3,000 hits in that. The Yankees' smallest home crowd this season was 41,571 on May 3 against the Orioles (ironically both Jay and I were among that number). They rarely sell out the new stadium because they've overpriced the best seats, but they are usually close to capacity, averaging 46,491 per game this season and ranking first in the majors in attendance for the eighth-straight season. Jeter chasing 3,000 hits isn't going to move the bottom line on ticket sales very much and ultimately adds little to his value to the team in the present. Also, baring a major injury the likes of which Jeter has never really suffered, that chase is going to end roughly mid-year in the first year of his new deal. It should be a non-factor to the Yankees and, if anything, gives the team added leverage as Jeter surely doesn't want to pick up his 3,000th hit in a Padres' uniform.

So what is Jeter worth? I'd love to see him sign a sort of "contract for life" worth $15 million in 2011 with a perpetual mutual option worth $10 million for every season thereafter that could be picked up one season at a time without the need for further negotiating. Tim Wakefield had a deal with the Red Sox along those lines worth $4 million a year with a $4 million club option added each time the previous one was picked up. That lasted from 2005 to 2009, when the Red Sox declined the option and re-signed him for $5 over two years. Wakefield is not in Jeter's class, of course, but if Jeter were to realize that the Yankees are more important to him and his legacy than he is to them and their future, he might be willing to discuss such a deal, which would likely overpay him for every season he plays under it anyway.

Jeter does have some leverage here. It's not that he's the captain, that he's on the verge of 3,000 hits, that he's been the face of the franchise for the last decade and a half, that some portion of the fanbase would be outraged at a perceived slight (though any fan so dedicated would be unlikely to express his or her objection by witholding their money from the team). It's that the shortstop market this winter is weak to terrible and he's still clearly the best available option for 2011 despite his age and likely decline.

The list of viable free agent shortstops is Jeter, Juan Uribe, Edgar Renteria, Orlando Cabrera, and Cesar Izturis. Cabrera just turned 36. Renteria will be 35 next August. Both are closer to retirement that Jeter, who is just five months Cabrera's senior. Izturiz couldn't hit water if he fell out of a boat. His aggregate line over the last six seasons is .251/.298/.308. That's a 61 OPS+. Jeter's worst full season at the plate was better than Izturis's best. Of those three, Izturis is the only one who is still a positive in the field, and he was barely that according to John Dewan's plus-minus ratings, saving just two runs more than the average shortstop, not nearly enough to negate the harm he does at the plate. That leaves Uribe, who was worth less than Jeter in 2010 according to WARP. The the defense-heavy WAR rated Uribe higher in 2010, but most of that defensive value came from his play at second and third base despite his having played less than half as many innings at those positions combined as at shortstop in 2010. Then there's the fact that Uribe's career on-base percentage is .300, while Jeter's single-season low was his .340 from 2010.

Jeter has leverage on the Yankees not because he helped them win in the past, but because they want to win in 2011. He's still going to be overpaid in both salary and years, but then you knew that already.