Will Cooperstown Call for Yankee Quartet? (Part I)

Share All sharing options for: Will Cooperstown Call for Yankee Quartet? (Part I) 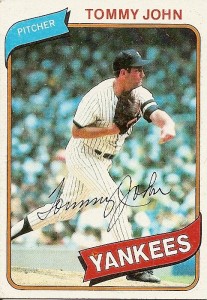 A mainstay for the Yankees during the second half of his career, not to mention a medical marvel, Tommy John doesn

As Baseball Prospectus' resident Hall of Fame expert, I've already parsed the latest Hall-related news over at BP and ESPN Insider, so I'll simply cut and paste my lead:

The 12-candidate ballot announced by the National Baseball Hall of Fame on Monday wasn't the Veterans Committee ballot typically unveiled this time of year, because the Veterans Committee is no more. Radically expanded back in 2001 to include all living Hall of Fame members as well as surviving Ford C. Frick Award and J.G. Taylor Spink Award winners, that unloved body was quietly smothered out of existence this summer, replaced by three era-specific 16-member panels designed to take up the cases of executives, managers, and umpires as well as players whose 15-year eligibility on the Base Ball Writers Association of America ballot has expired. The ballot in question is the Expansion Era ballot, explicitly covering candidates "whose most significant career impact was realized during the 1973-present time frame." Never mind that the committee in question looks a whole lot like the pre-2001 VC which committed some of the most flagrant electoral mistakes in the Hall's history, that 1973 doesn't actually demarcate any round of major league expansion, and that the ballot may not have gotten the era's best candidate. Does anything the Hall of Fame does make sense?

That multitude of quibbles aside, I bring this to the Pinstriped Bible readers' attention primarily to note that the slate includes four Yankee-related candidates. Pitchers Ron Guidry and Tommy John are among the eight players on the ballot, joining Vida Blue, Davey Concepcion, Steve Garvey, Al Oliver, Ted Simmons and Rusty Staub. And in a pairing that seems inspired by the classic Miller Lite TV commercial, recently deceased owner George Steinbrenner and long-dead manager Billy Martin are among the four non-players on the ballot, joining former Major League Baseball Players Association Executive Director Marvin Miller and general manager Pat Gillick. The slate of candidates will be voted upon on December 6 at the Winter Meetings in Orlando, Florida, with each candidate needing 75 percent of the vote (12 out of 16) to gain entry.

Over the past seven years at Baseball Prospectus, I've examined the merits of the players on the various Hall of Fame ballots using my JAWS system, a Hall of Fame monitor devised to compare a player's career and peak Wins Above Replacement Player totals against those of the average enshrined player at his position. The system's stated goal is to identify and promote above-average candidates whose election to the Hall won't lower the standards any further the way the admission of a Jim Rice — whose career was too short and too park-influenced to be as valuable as it appears at first glance — would. JAWS doesn't capture the entirety of a player's case, but it measures the bulk of it — regular-season offense, defense and pitching value, adjusted for park and era — quite efficiently. Depending upon how a player measures up on that basis, one can more easily evaluate whether postseason performance and the more subjectively evaluated elements — awards, All-Star appearances, records and other special accomplishments — are enough to move the needle in a close case.

The hard-throwing Guidry and the soft-tossing John are a study in contrasts as candidates, just as they were as pitchers. The Gator's entire 14-year career was spent with the Yankees. He was a third-round 1971 draft pick who debuted in the Bronx in 1975, stuck for good in 1977, and spent his first nine full seasons as one of the game's top starters. Over that nine-year timespan (1977-1985), only Dave Stieb (135) and Steve Carlton (126) had better ERA+ marks than Guidry (123), only Nolan Ryan, Mario Soto, Carlton and Floyd Bannister had higher strikeout rates than his 6.7 K/9, and nobody had a better strikeout-to-walk ratio than his 2.8. Guidry was simply awesome at his peak, going 25-3 with a 1.74 ERA and nine shutouts in his Cy Young-winning 1978 campaign, and finishing in the top five in Cy Young voting four times.

The problem is that Guidry had a relatively short career. He didn't stick until age 26, and didn't last long after his impressive stretch, throwing less than 400 innings from 1986-1988 before retiring at age 38. He finished with just 170 wins, which is extremely low for a Hall of Fame candidate, and a product of excellent run support, nine percent above the park-adjusted league average. He accumulated just 46.3 career WARP and 36.5 peak WARP (his best seven seasons), for a 41.4 JAWS score. The average Hall of Fame starter tallied 70.3 career WARP and 47.7 peak WARP for a 59.0 JAWS; in other words, they had more great seasons and longer careers. Guidry doesn't even measure up very well against pitchers such as Orel Hershiser (54.7/41.6/48.2), David Cone (53.9/38.2/46.1) and Dwight Gooden (51.6/37.6/44.8) who were similarly at their best early in their careers, hit some road blocks, and gritted it out as average-to-above-average major league starters for longer.

Which isn't to say there aren't Hall of Famers with similar scores; Whitey Ford (51.7/31.1/41.4) has exactly the same JAWS total, but he had a rather different career. He reached the majors at 21, only to miss two years due to military service, and he was rarely a workhorse; the Yankees sometimes held him back in September in order to prevent him from reaching 20 wins and to rest him for October, where he did more work than any pitcher in the days when the pennant-winners went straight to the World Series, as Ford's Yankees routinely did — 11 times in a 15-year span!

On the other hand, John pitched for six different teams over the course of a record-setting 26-year career which began with the Indians in 1963 and ended with the Yankees in 1989. That was actually his second tour of duty in pinstripes; he spent 1979-1982 as a Yankee (traded to the Angels late in that latter year) and then returned in 1986, and while he threw more innings for them than any other team, the more fascinating part of his carer took place with the Dodgers. Twelve years into his career as an above-average starter, John blew out his elbow, and only via an unprecedented technique to reconstruct it undertaken by Dr. Frank Jobe in 1974, followed by a similarly unprecedented rehabilitation was he able to return to the majors. Because of that, the replacement of a player's ulnar collateral ligament with a tendon from elsewhere in the body is now known as Tommy John surgery.

In 1977, his second season after returning to the majors, John began a stretch which saw him win 80 games over four seasons split between the Dodgers and the Yankees, make the All-Star team three times, and finish as the Cy Young runner up in both leagues. Extending that run to include 1981, he pitched in three World Series in a five-year span, alas never on the winning side; famously, manager Bob Lemon pulled him from a 1-1 tie in the fourth inning of Game Six in 1981 — supposedly on the order of Steinbrenner — and all hell broke loose; the Dodgers won 9-2 to take the title. After that stretch, he still had eight seasons left as a league-average pitcher, lasting through his age-46 season.

John racked up 288 wins (26th all-time) and 4,710 innings (20th), totals that might be higher had it not been for his injury. Or maybe not, given the uptick in his performance which likely came with being in better physical shape following his rehab. Had he reached 300 wins, he'd have been guaranteed enshrinement in the Hall of Fame — no 300 winner has failed to gain election, though some have taken a few years to reach Cooperstown — with only minimal further scrutiny of his case. As it is, he spent 15 years on the BBWAA ballot without getting even half the voting support he needed, and that was probably the right call. John's lack of strikeouts leaves him owing more to his defense than most other high-win total pitchers. He topped 5.0 WARP only five times, accumulated "just" 64.5 WARP over the course of his lengthy career, and 35.3 WARP at his peak, about 1.8 less per year than the average enshrined starter. His 49.9 JAWS beats a lot of Veterans Committee-elected pitchers from the early 20th century, not to mention 300-winner Don Sutton (61.8/31.4/46.6), but it's behind the likes of good-but-not-elected contemporaries such as Luis Tiant (62.7/.42.6/52.6), Frank Tanana (63.3/41.4/52.4) and Wilbur Wood (53.3/47.7/50.5). Only if one grants a rather sizable "pioneer" bonus for his surgery can one justify his election.

As for the other players on the Expansion Era ballot, none of them tops the JAWS standard at their position, but Concepcion is close. The shortstop for the Big Red Machine, one of the great dynasties of recent history, he was part of a team which won five division titles, four pennants and two World Series during the 1970s (including the 1976 sweep of the Yankees) under recently deceased manager Sparky Anderson. The nine-time All-Star from Venezuela wasn't a spectacular hitter, although hardly a total loss with the bat; on the other hand, he was a defensive marvel, a five-Time Gold Glove winner and a pioneer who perfected a one-bounce throw off the Astroturf that increased his effective range. The advanced metrics back his case; from 1973 through 1982, he was about 18 runs above average per year—nearly two wins!—and his career mark of 174 Fielding Runs Above Average tops all enshrined shortstops except for Ozzie Smith, Honus Wagner, Joe Tinker and Cal Ripken.

In all, he's a borderline case, a bit short in career value relative to the average Hall shortstop (66.8 career WARP, where the standard is 70.0) but a whisker ahead on peak (48.3, versus 47.9), with a 57.6 JAWS that's a bit below the standard (59.0). That mark does top all but two of the VC-elected shortstops in the Hall (Arky Vaughan and George Davis) and is right on par with bat-first, glove-second contemporary Robin Yount (68.5/46.2/57.4). That he played a key position for a dynasty and hit exceptionally well in the postseason (.297/.333/.455) may be enough to justify getting him over the hump.

Of the rest, Simmons has a case as the second-best catcher who's eligible for the Hall of Fame but not in, but he's significantly shorter. After six All-Star appearances in 11+ seasons with the Cardinals, his bat withered and died upon being traded to Milwaukee at age 31. The 10-time All-Star and 1974 NL MVP Garvey, the seven-time All-Star and 1982 NL batting champion Oliver, and the six-time All-Star Staub all racked up at least 2,599 hits, but a relative lack of power and/or plate discipline kept them from adding enough value to their superficially attractive batting averages to merit election. Blue, a mainstay of the A's mid-Seventies dynasty and the winner of the 1971 AL Cy Young and Rookie of the Year awards, followed the typical burn-brightly-but-briefly pattern. He did win 209 games, and was a good enough pitcher that he'd have certainly pushed that total higher had it not been for persistent cocaine problems that led him to prison as well as a year-long suspension, limiting him to just 373 innings after age 32.

Managers and executives don't fall under the purview of JAWS, but as you might guess, I've got a pretty good head of steam when it comes to their candidacies. I'll be back later this week with my takes on the non-playing Yankees on the Expansion Era ballot.