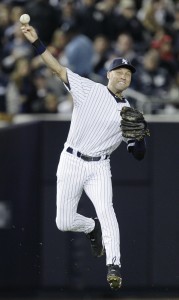 Derek Jeter's patented spin 'n' jump throw: make enough of these and they'll forget you have the reaction time of the US Congress. (AP)

You probably figured this reaction was coming as soon as you heard the news. The American League Gold Glove award winners were announced today, and three Yankees came away some tasty, foil-wrapped chocolate. Mark Teixeira won his fourth award, Robinson Cano his first, and Derek Jeter his fifth.

As you are no doubt aware by now, the Gold Glove awards are perverse, comical, capricious, and often several years behind the times, rewarding players for for their reputation rather than their performance. That is both the explanation and the excuse for Jeter taking home another trophy. The voters, lacking a name candidate to support and not wanting to give the award to someone like Elvis Andrus or Cliff Pennington or Cesar Izturis, went for their old reliable choice.

I happened to be listening to MLB Radio on Sirius-XM when the awards were announced. Mark Kotsay was being interviewed, and the hosts (Casey Stern and Jim Bowden) got his reactions to the winners. Of Jeter he said (I paraphrase), "He doesn’t make the spectacular play, but he makes the routine play on the ball hit right at him, which is all a pitcher wants. But if you’re looking for someone with more range to their left or their right, there are many younger shortstops who are better." This is (A) a fair description of Jeter’s current abilities and (B) a guy trying extremely hard to say something nice.

I’m not going to go through the whole argument about Jeter’s defense again, seeing as we’ve done that in recent days, except to reiterate that you don’t need advanced fielding stats to see the truth of Kotsay’s description, you just need a pair of eyes, or even one eye (trust me). If you like to combine your personal optics with statistics, then you already know that all of them confirm what your eyes are saying—they agree that Jeter is limited, with the only disparities being the extent to which they think his inability to work East to West punishes the Yankees.

As for those metrics’ opinions on Cano and Teixeira, they will tell you that they weren’t necessarily the best choices—Mark Ellis or Orlando Hudson at second base and Daric Barton or Lyle Overbay at first would probably be the preferred choices, depending on which interpretation of the numbers you choose—but they weren’t poor choices either. They might not have been top of the league, but they were good defensive players having good years. Again, you could see this with your eyes, particularly in the case of Cano. As a young player he made frustrating, distracted errors. After the 2005 season, I wrote, "He lacked concentration, committing careless errors (17 for the season, second among AL second basemen) and was especially good at an abortive 4-6 force play that often required the intervention of Hideki Matsui to keep the ball from rolling to the left field warning track." In the years since, he has worked hard to improve, and the results show on the field. Not only are the careless errors gone, but he sometimes makes the spectacular play despite not being the fastest guy at the ballpark. I am more ambivalent about Teixeira, as it seemed to me that his many injuries limited him late in the year.

Still, these are minor caveats given that Teixeira and Cano deserve to be part of the conversation by any measure, whereas Jeter does not. On defense he’s a Gold Anchor, a Gold Paperweight, the Golden Vanity, anything, really, except a Gold Glove. He plays doorstop, not shortstop, but they don’t give out awards for being the infielder most likely to have pigeons roost on his shoulders, or as Kotsay put it, the Gold Glove for Being Great at Making the Routine Play. It means that managers and coaches either have outsized respect for Jeter or were too flummoxed by the available choices to make another.

Yet, as I said last week, tossing plaudits at the undeserving is not really respect. This reminds me of a discussion of Greil Marcus’s new collection of Bob Dylan pieces over at the New York Review of Books. Giles Harvey writes, "Marcus is also admirably severe: he knows that not to hold Dylan to the highest possible standard is to condescend to him." Damned straight. The same thing is true of Jeter. He’s a great player, a Hall of Famer. Accolades he doesn’t deserve should embarrass rather than encourage him, because we all know he has been better. To pretend otherwise is an unasked for act of charity that diminishes everyone involved.