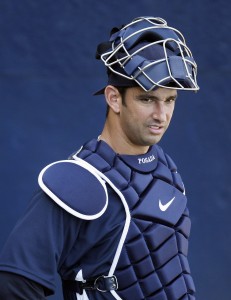 Jorge Posada says, "I dare you to try to pull this catching gear off of me!" (AP)

Jorge Posada made some headlines yesterday when he told the Daily News that he will "prepare" to be the starting catcher next year. I'm going to prepare for (the starting catching job). I love catching, love being behind the plate. I take a lot of pride—that's my position… If (the Yankees) want me to be DH or catch, just be honest and let me know what's up."

I suppose this suggests that Posada isn’t ready to give up easily and will go to camp girded for war with Jesus Montero. Look out, boys and girls… Conflict! Yet, this is in no way a bad thing. First, you’re going to need Posada to catch some of the time, so he might as well be ready. Second, there is every chance that Montero is not deemed ready at the start of the regular season and the Yankees might have six or eight weeks of Posada-Frankie Cervelli behind the dish. Someone could get hurt during the season, Montero or Cervelli, and Posada could get more catching time than expected. This seems obvious, but no one has said of Posada, "He is now and forevermore an ex-catcher." He is going to catch, so he might as well be ready.

Posada might have been the worst defensive catcher in the majors last year, and yet, he hit well enough that he was still a net positive for the Yankees. He also hit better when catching, and the rush to make him the everyday designated hitter tends to skirt the question of if he’s even the best choice for the job. Getting back to catching for a moment, Posada’s lack of mobility behind the plate is not in doubt, and is frequent strolls to the mound are frustrating from a viewing point of view, but if the rush to replace him is because of throwing, it’s very much a misguided urge.

The major league average catcher threw out 28 percent of runners last year. Posada got 15 percent. That is to say that for every 100 stolen base attempts, the average team gave up 72 steals and the Yankees gave up 85. They’re down 13 bases. Not all of those runners score, so it’s not a huge deal. Second, there aren’t a lot of great throwers in the game right now, and there’s usually a big trade-off of offense if you want to have one. Yadier Molina threw out 49 percent of attempting basestealers, but Molina is also a .268/.327/.361 career hitter. Henry Blanco threw out half of his basestealers with as a backup for the Mets, but he also hit .215/.271/.300. The catchers who can hit—Joe Mauer, Brian McCann, Geovany Soto, et al—were closer to average or a little below.

A third point to consider is that this year Cervelli dropped from an excellent 43 percent caught stealing rate to a miserable 14 percent rate, not too different from Posada’s. We can draw one of three conclusions here: That Cervelli forgot how to throw at 24, that his 2009 rate was a fluke, or there was an outside factor affecting Yankees throwing in 2010, most likely the pitchers not doing a good job of minding runners or failing to deliver to the plate on a timely basis.

Basestealing isn’t the only part of a catcher’s job. Posada is a wild pitch and passed ball machine. He nearly led the AL in passed balls this year and he only caught 83 games. Again, this is frustrating, but these one-base advances don’t necessarily pay off in losses or even runs, and if Posada hits up to his capabilities, and he was batting .262/.367/.485, not too far off from his career numbers, when a head-ringing foul tip on September 7 apparently caused him to slup over the remainder of the season, he can make up those bases with one swing.

Montero, and if not Montero than Austin Romine (whose offense capabilities I am starting to feel the slightest skepticism about), are the future, and that future needs to arrive, or begin arriving, in 2011. Every chance to get them into the lineup should be taken. However, that’s not the same thing as saying that Posada is without value, even as a catcher, or that he’s at all misguided when he says that he will be ready to start again.