Share All sharing options for: Jesus (Montero) Is Coming 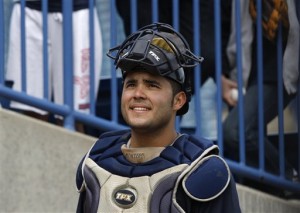 Jesus Montero could unseat Jorge Posada as the Yankees' #1 catcher by the time the 2011 season opens (AP).

The latest news out of Yankeeland suggests a changing of the guard will take place come springtime in Tampa. According to the New York Daily News' Mark Feinsand, Jesus Montero will be given the chance to win the starting catching job in spring training, and to catch around 100 games during the season. If that happens, Jorge Posada will assume the regular DH duties, while sharing the backup backstop role with Francisco Cervelli. Furthermore, Austin Romine, the Yankees' other high-level catching prospect, could find his way to the Bronx in place of Cervelli at some point during the season.

While this doesn't exactly count as a surprise given the widespread expectation that Montero would see time with the big club next year, it's a particularly aggressive timeline. Montero — who's been named the Yankees' top prospect by Baseball America for the second year in a row — won't turn 21 until November 28, and he doesn't even have enough minor league service time to require him to be on the team's 40-man roster this winter. There's very little question that his bat is something special; he hit .289/.353/.517 with 21 homers at Triple-A as a 20-year-old, and that was after an injury-related slow start; from the All-Star break onward, he crushed at a .351/.396/.684 clip. As I noted before, prospect experts have compared his offensive potential to Miguel Cabrera and Frank Thomas.

The questions about Montero center around his defense. He's got a strong arm, and while he drew praise for improved throwing accuracy this year, he still threw out only 23 percent of runners attempting to steal. Admittedly, that's better than both Posada (15 percent) and Cervelli (14 percent) but well below the major league average of 28 percent. More damning is the fact that runners averaged 1.2 stolen base attempts against him per game, because they knew their chances of success were so good. Worse, Montero led the International League with 15 passed balls, 50 percent more than any catcher in the league. Cribbing from the scouting reports I'd gathered back in mid-August:

In his preseason Top 11 list, my Baseball Prospectus colleague Kevin Goldstein called Montero "a well below-average catcher" whose "big, thick build doesn’t provide much agility defensively." In a more recent assessment of Montero’s progress via Twitter, he was brutally blunt: "Bad receiver, doesn’t block well, bad vs running game." Could he handle 40 percent of the current catching load? "No." Other than that, how was the play, Mrs. Lincoln?

There are doubts as to whether he’ll be able to stay at the position long term. [ESPN's Keith] Law is concerned about his size: "[Montero is] a guy who is listed at 6’4″, 225, and is likely heavier than that is massive for a catcher. He’d be heavier than any catcher in the majors, I believe, and taller than all but [Joe] Mauer, Chris Snyder, and [Jarrod] Saltalamacchia — none of whom is a paragon of health."

According to Feinsand, not everyone in the Yankee front office is sold on Montero's defensive progress. He quotes general manager Brian Cashman as saying, "I do have people who believe he's major league-ready at the catcher position with a tremendous offensive bat." One of those people is Mark Newman, the Yankees' Senior VP of Baseball Operations. In June, he told the Daily News, "[H]e has come light years (defensively) since the middle of last season," and later during the summer he told NoMaas.org that "He’s receiving well and growing as a game-caller."

It's not as though Montero would be replacing Johnny Bench. Both Posada and Cervelli struggled mightily beyond their failures to throw out base thieves in 2010. Posada had eight passed balls in just 83 games, while Cervelli made a whopping 13 errors, tied with Jason Kendall for the league lead. The ongoing struggles of heretofore competent starters Javier Vazquez and A.J. Burnett don't speak terribly well of either receiver's game-calling skills; fears about their catchers' ability to block balls in the dirt could have led to throwing fewer breaking balls and thus more predictable pitch sequences. The potential midseason addition of Romine, a good glove man with potential pop, but hardly an elite hitting prospect, could provide a real boost later in the year.

While the plan isn't likely to sit well with Posada — "I want to catch. I want to be back there," is the familiar refrain — the fact is that it should keep the 39-year-old healthier than he's been in recent years. Posada struggled with a variety of knee problems all year, served DL time due to a a fracture in his foot in late May, and fell into a late-season funk after a concussion scare, batting just .149/.286/.234 over the season's final three weeks, and then .267/.313/.333 in the postseason. He made just 78 starts behind the plate, his fewest since 1997, and started three games in a row just once after May 3, not including the postseason, when off days spread out the workload. He didn't hit particularly well while DHing (.245/.342/.412 in 117 plate appearances, compared to .256/.370/.474 as a catcher), but it stands to reason that he may been playing at far less than 100 percent during some of those times. He's still capable of providing above-average production from the DH slot, and if he anywhere close to 100 starts there and another 30 or so behind the plate, he'd wind up with more plate appearances than he's had in any season since 2007.

Still, even with the Yankee brass gung ho about moving on with Montero, one need only look to the way the world champion Giants handled Buster Posey this past year for one potential route they could take. The Giants kept Posey him in the minor leagues until late May, and then didn't move him into the full-tme catching duties until late June, when Bengie Molina was traded to the Rangers. They claimed Posey needed to do more work on his defense in order to be big league ready, but the real reason had to do with service time; by keeping him down on the farm for those two months, they pushed off his free agency for an extra year, and may have forestalled his arbitration eligibility as well. Teams have so commonly gamed the arbitration system in that manner that the so-called "Super Two" cutoff — the top 17 percent of players with service time between two and three years — is 17 days earlier than it was last year. Even with their seemingly endless resources, the Yankees keep a close watch on the bottom line, and they may well do as other teams do in order to control Montero for an extra year.

Still, it's rather exciting to think of such a promising young bat joining the lineup sooner rather than later. With little flexibility elsewhere, such a move would inject a much-needed dose of youth into a lineup that will regularly have three players over 35 (Alex Rodriguez, Derek Jeter and Posada) and just one other one under 27 (Brett Gardner). Think of the excitement the Braves felt last spring when they added Jason Heyward to the lineup, or the Giants when they proudly displayed Posey during the season's second half and on into October. That's the caliber of rookie the Yankees will have on their hands, and it could be a whole lot of fun.