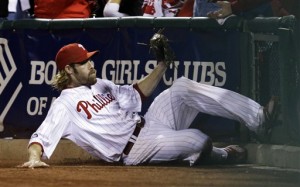 (Sorry about that headline. I didn't eat a very good lunch and was raised by wolves.)

If you joined me for Wednesday's line-item stroll through the 2011 Yankee payroll, it should come as no surprise to you to find that the Yankees have no plans to make runs at free agents Carl Crawford or Jayson Werth, the two top position players on the market. While it might seem natural to link the Yankees to just about any player with a big sticker price — it's what those players' agents lie awake every summer night dreaming of, not to mention an obvious talking point for any pundit — they're simply not fits for the combination of the Yankees' current needs and budget. And while the Yankees spend far more than any other team on payroll, they most certainly do have a budget.

As noted in my aforementioned piece, Hal Steinbrenner's stated desire is to keep the Yankee payroll at "the same level" as recent years. Loosely translated, that means an opening day payroll somewhere just north of $200 million dollars. The Yankees have been above that mark four times in the past six years. They've been above $205 million in three of those years, including 2010 ($206.3 million). But they've never been above $210 million, topping out at $209.1 million in 2008. Similarly, while they've shown a willingness to add payroll in-season via trades, their year-end payrolls — which tally the incentive bonuses, buyouts and other benefits they actually paid over the course of the season, as well as the base salaries — have never topped $225 million. We don't have those figures for 2010 yet; the commissioner's office generally releases those figures right around Christmas time, but from 2007 through 2009 they ranged from $218 to $222 million, again a very narrow band.

Accounting for the salaries coming off the books and the raises due the remaining players via contract clauses and arbitration, my calculations quickly took the Yankees to $159 million committed to 19 roster spots, which would appear to leave not much more than $50 million available to re-sign Derek Jeter, Mariano Rivera, Andy Pettitte and whomever they go after on the free agent market — not only Cliff Lee, their number one target, but also any significant bench players to fill the slots vacated by Marcus Thames and Austin Kearns, to say nothing of the sizable hole in the bullpen left by Kerry Wood's departure. Considering that Jeter, Rivera and Pettitte made nearly $50 million alone in 2010, it's apparent that the Yankees can't simply pile another $20-25 million on without heading for a $230 million opening day payroll and a $250 million year-end tally. Remember too that for every extra $1 million the Yankees add to the pile above a certain threshold — $170 million in 2010, $178 million in 2011 — they pay a 40 percent luxury tax.

Which, as I've said, means that Steinbrenner and Brian Cashman have to get creative. They could backload any of the multi-year contracts they take on, but the only 2011 salary that they can count on phasing out in 2012 is Jorge Posada's $13.1 million. They could hope CC Sabathia opts out after 2011, clearing about $24 million a year from the books, but that's his choice, not theirs, and it's not written anywhere that Lee will age better than the big man, their contrasting physiques be damned. Meanwhile, a year from now the Yankees will need to give Robinson Cano a sizable raise from $10 million, and figure out what to do about Nick Swisher's relatively affordable 2012 option (10.25 million).

The other option for creativity is the trade route, but if Cano's off the market — and he damn well should be — then it's really only Swisher ($9.1 million in 2011) and Curtis Granderson ($8.25 million) who have the kind of salaries that might appeal to other teams. If the Yanks trade one of them, they need to replace significant production; after Cano, Swisher was the team's second most productive hitter on a per-out basis according to Baseball Prospectus' True Average stat, one of the big reasons why the Yankees were able to lead the majors in scoring despite relatively down years from Alex Rodriguez, Mark Teixeira, Jeter and Posada. Meanwhile, Granderson really came on strong over the final six weeks of the year after some swing-doctoring, work that bodes well going into next year, particularly as he no longer appears to be an automatic out against lefties.

Either Crawford or Werth could replace the production of Swisher or Granderson, but it would come at a premium cost, probably somewhere around the $16-17 million the big corner outfield bats on last winter's market, Jason Bay and Matt Holliday, are making. Such a swap wouldn't do much to solve the problem of the Yankees' aging offensive core; Crawford is less than a year younger than both Swish and Grandy, while Werth is more than a year older than both. Adding either would more or less double the Yankees' expenditure at that position, lock in another long-term contract that decreases their flexibility — such deals are why exercises like this are so necessary — and leave the team with even less to spend on Jeter, Rivera and Pettitte for 2011 and beyond. All of which would make a Lee deal an even bigger strain on the budget.

No, if the Yankees are bent on spending big dollars to add somebody new to the fold, then their offseason priority has to be pitching. The team was fifth in the league in run prevention at 4.28 runs per game, but their rotation's 5.24 ERA after the All-Star break was worse than any AL team except the Royals. They entered the postseason with serious question marks about their starters, and the team got just four quality starts — six or more innings, three or fewer runs — in their nine postseason games; the Rangers got that many in the six ALCS games. We now know that both Sabathia and Pettitte were pitching hurt, while Phil Hughes was running on fumes and both A.J. Burnett and the unrostered Javier Vazquez were essentially lost causes. If the Yankees are determined to avoid acknowledging the affordable starter they have in their midst, then their focus has to start with the rotation, and their shopping list has no room for another big bat.