Share All sharing options for: On Sparky's Third Act (With a Note of Caution for the Yankees)

Just a day after I said that I wouldn’t eulogize Sparky Anderson because he was still around, the great manager passed away. Earlier today, Rob Neyer wondered about the last act of Anderson’s career; after just making it into the 1987 playoffs, the team was largely mediocre, alternating eighty-something-win seasons with losing records, including 103 losses in 1989:

It does seem odd that Sparky Anderson could have managed the Tigers for so long -- he managed the Tigers nearly twice as long as he managed the Reds -- and been a losing manager during most of his tenure. It does seem odd that Sparky's Tigers never came close to making the playoffs in his last seven seasons as manager… The last bit of his managerial career didn't go nearly as well [as it had]. Maybe someday we'll try to figure out why. 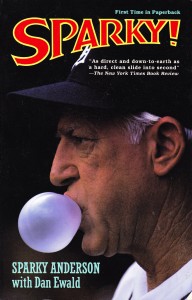 Sparky Anderson: Why did the Tigers' bubble burst?

I don't share Rob's perplexity; the reasons for Sparky’s pale third act always seemed obvious. Some of it had to do with the way Anderson used the talent he had, but the larger part of it was that the talent he had was insufficient, particularly in the area of pitching. Anderson joined the Tigers at a fortuitous moment in their history. The farm system had just pushed out Lance Parrish, Jason Thompson, Lou Whitaker, Alan Trammell, Steve Kemp, Kirk Gibson, Jack Morris, and Dan Petry. This was an incredible short-term haul for any team, the payoff from just four drafts (1974-1976 and 1978). All of them, except Gibson, All-Stars, and Gibson won an MVP award. These players, or players received for them in trade (Kemp brought Chet Lemon from the White Sox; Thompson, traded for Al Cowens, was the only one who got away without a legacy) would form the Tigers' core for years to come, much in the way that Jorge Posada, Derek Jeter, Andy Pettitte, and Mariano Rivera have been at the heart of the Yankees since the mid-1990s—and yes, Yankees fans, you should take the following as a cautionary tale.

What happened next is the same story that awaits us all, ballplayers or not: the core began to decay. Some left via free agency (Parrish, Gibson, Morris), played until retirement (Whitaker, Lemon, Trammell), or got hurt and were let go (Petry). None of this is surprising and shouldn’t have been at all unexpected. What brought the Tigers down was that they were ill-prepared to replace them. The farm system seemingly expired in parturition, exhausted from birthing so many great players. Here are the significant—if you can call them that—players produced by the system over the remaining years of Anderson’s Tigers tenure after the last of the above players, Gibson, was selected in 1978, The year preceding the players’ names is their draft date:

In this period, the Tigers got one Hall of Famer, Smoltz, and semi-stars in HoJo, Fryman, and Hoiles. All but Fryman were dealt for veterans, Hoiles and Smoltz without ever playing in the majors. Even though the Smoltz deal had a tremendous short-term payoff, the Tigers suffered for it in the long run. Glenn Wilson brought Willie Hernandez, a huge addition, though in any case he wasn’t a very good player and they didn’t miss him. Justin Thompson had the makings of a very good pitcher, but his arm fell off. So for this whole period, the Tigers drafted and retained few decent position players, Travis Fryman being the only one of lasting value, and with the exception of Henneman, no pitchers of lasting value that actually remained with the team.

The Tigers did get some pitchers out of international scouting, Jose Lima being one, but he didn’t blossom until later, and then only fleetingly (on the position player side, all they got out of Latin America was Danny Bautista).The system did send up a few other pitchers, some of whom were briefly thought to be prospects, pitchers like Sean Bergman, Kevin Ritz, Scott Aldred, and Steve Searcy. None developed.

This brings us back to Sparky Anderson, in this case manager, chicken, and egg. Was he culpable in the fact that these pitchers couldn’t establish themselves as Tigers? I don’t think so; they weren’t exactly dominating in the minor leagues. They were just what the Tigers had, and they weren’t good enough. Position players were a similar story. Anderson used what he was given, but he wasn’t given much. It is difficult to find a player who Anderson let get away and became a star after (his interaction with Smoltz and Hoiles was likely somewhere between limited and nonexistent), with the exception of Howard Johnson.

Anderson has been justifiably pilloried for giving up on the future Mets All-Star, for example by Bill James in his Guide to Baseball Managers. James wrote, "In the first decade of his career, Anderson was always eager to find young players of ability and get them into the lineup. But later in his career, Anderson became almost entirely dependent on established players, even when they weren’t any good. From 1991 to 1994, with his team in a steep decline, he used hardly any everyday players who were under the age of thirty… The turning point in this regard was Howard Johnson… Sparky for some reason decided that he just didn’t want him."

Fair enough. The problem is, you can’t find too many other examples of Anderson doing this in the later Tiger years. Matt Nokes, one of the few youngsters the Tigers acquired in trade in those years, came and played. Fryman played. Scott flippin’ Livingstone played. It seems that most or all managers become more partial to veterans as they age, and this was probably true of Anderson as well, but we will never know for sure because the team gave him so few young players to discriminate against.

If there is a perplexing aspect to Anderson’s career, it’s not that the Tigers sank, but that he chose to ride the ship down to the bottom. When the Tigers collapsed in 1989, he was only 55 years old. He could have gone to a team with better long-term prospects (in both senses of the term) and started over. Perhaps he was too comfortable in the Motor City, or too attached to his players. Perhaps he lacked the foresight to see that the Tigers weren't coming back. Maybe he just didn’t have the fortitude to go somewhere new—he took a stress-related leave of absence in 1989, and as many have noted, he looked much older than his years.

Whatever the reason, it seems unlikely that any manager could have done much more than Anderson did to pull the Tigers out of their tailspin. He even got a surprise contender out of them in 1991, taking a team that was home runs, walks, and no pitching into first place for a moment in late August before finishing second. The mystery, then, is not one of baseball smarts but of the human heart, and why we make the decisions that we do. Why does a fat man eat his way to a heart attack? Why does the smoker blacken his lungs? Why does a manager burn himself out in Detroit rather than seek greener pastures? I have no answers to these questions; chances are, neither did Sparky Anderson.