Breaking Down the Rule 5 Draft

Share All sharing options for: Breaking Down the Rule 5 Draft 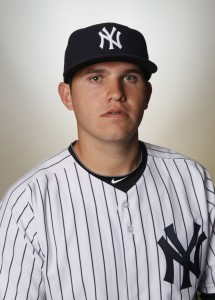 Brandon Laird is eligible for the Rule 5 draft this year. (AP)

While players begin to explore free agency and ballclubs sniff around for the prime rib of the crop, teams are also mulling their minor-league options. The Rule 5 draft is looming, and decisions need to be made on who must be added. Last year, the Yankees lost a pair of pitchers, righty Kanekoa Texeira (Mariners, later picked up by the Royals) and lefty Zach Kroenke (Diamondbacks), to the Rule 5. This season, the Yankees have some other tasty choices to add to the 40-man roster.

Before we can begin to guess who will be added, we have to evaluate the current roster. New York has 42 players on their 40-man roster (Alfredo Aceves, Nick Johnson, and Damaso Marte are on the 60-day disabled list, but those tags are removed in the winter). On Tuesday, the Yankees outrighted Chad Gaudin and Royce Ring from the 40-man but added Melky Mesa (more on him in the position player portion). Gaudin and Ring were going to be among the first roster cuts to protect players, so they are no huge loss. Gaudin elected free agency, while it seems Ring accepted his assignment.

Then come the Yankees’ free agents. Lance Berkman, Derek Jeter, Johnson, Austin Kearns, Chad Moeller, Andy Pettitte, Mariano Rivera, Marcus Thames, Javier Vazquez, and Kerry Wood are all free agents. (If you want a complete list of free agents, check it out here.) Berkman, Johnson, Kearns, Moeller, Thames, Vazquez, and Wood will almost certainly not be back, though there is a case for Thames’ return. That leaves you with the “legacy” players. Pettitte may choose to retire, but it is safe to assume that the Yankees will bring back the Cap’n and Mo. For the sake of argument, let’s say Pettitte returns; even if he doesn’t, the Yankees will need another starting pitcher, so his spot will be locked one way or another.

After that, the Yankees will have to make decisions on Jonathan Albaladejo, Boone Logan, Juan Miranda, Sergio Mitre, and Dustin Moseley. Alby, Logan, and Miranda are out of options, while Mitre and Moseley are arbitration-eligible. Considering the ever-present need for a long reliever, the Yankees will probably bring back at least one of Mitre and Moseley (though it shouldn’t surprise if they tender both contracts). With Marte out until at least next July, Logan gets the designated southpaw tag and is assured a spot. Though his performance still hasn’t translated at the big-league level, Albaladejo should at least stick on the roster through spring training. If he doesn’t perform well, the Yanks can cut him. As for Miranda, he’s a righty-masher—a perfect platoon partner for a guy like Marcus Thames. However, as a perhaps-26-year-old first baseman who doesn’t pulverize all pitchers, the Yankees could drop him; he’s not likely to stick with the big club all year.

In the last bit of roster dissection, there are a few prospects on the 40-man roster that are expendable. The Bombers could jettison Reegie Corona, Steve Garrison, and Greg Golson and feel no ill effects. Corona played poorly until his season ended with a broken arm, Garrison is 24 and hasn’t put up a great season since 2007 but had enough raw talent the Yankees plucked him off the waiver wire, and Golson has always had hitting talent but hasn’t been able to translate it into results. Furthermore, his on-base percentage barely scrapes the .300s for his career; his speed and defense are nice, but the lumber leaves much to be desired.

Where does that leave us? Let’s go the ultra-conservative route, so we can account for any potential free-agent signings. If you cut out the free agents (except Jeter, Mo, and Pettitte), the roster sits at 35. Assume the Yankees will look for a bat or two to replace Johnson and the Berkman/Kearns/Thames trio, making it 37. Also assume the Yankees will be looking for a bench player, a guy who can fill in either the infield or outfield—38. Brian Cashman said he wants another lefty; maybe he signs one, or just inks another pitcher for rotation depth—39. For good measure, we’ll say another pitcher is added (that whole “you can’t have too much pitching” adage)—40.

For this exercise, we will say that Mitre and Moseley get contracts, but Corona, Garrison, Golson, and Miranda will be cut. That gives the Yankees four spots to play with. Who stays and who goes? For this exercise, I’ll be using this handy list that was reviewed by Yankees senior vice president of baseball operations, Mark Newman.

Since the Yankees system is scarce in position player talent, let’s start with them.

As mentioned earlier, Mesa was added to the roster. He was actually eligible to become a free agent at the end of the year, and deciding they weren’t full up on Melk yet, the Yankees added him to the 40-man. It’s hard to allow a player who bopped 19 homers in Tampa go, even if he was a bit old for the level. If Mesa doesn’t continue to mash, the Yankees can DFA him and no harm done, but the chance to have a player who can light up the basepaths and bash is worth protecting.

After Mesa, there aren’t many position players that warrant protection. Abraham Almonte, Zolio Almonte, Brandon Laird, Luis Nunez, Damon Sublett, and Brad Suttle are the only ones who might get a look. There’s one quick way to clear it up, though. First, protect Laird, who is the only one who looks to be on the brink of contributing at the big-league level. Anybody who hasn’t played above High-A can go: leave the Almontes and Suttle unprotected. Nunez looked awful in Trenton (.241/.284/.370). Sublett, who has suffered a multitude of injuries since the Yankees drafted him in the seventh round in 2007 (back, hamstring, thumb, and more), didn’t play well after breaking his thumb this year and can be left unprotected. In short, the only player the Yankees risk losing is Laird, and he should be the only position player protected.

That leaves three spots for hurlers. There are some recognizable names. Take J.B. Cox, who was once considered to be Mariano Rivera’s heir. He left baseball last year and returned in July. The 26-year-old’s results weren’t good in Tampa or Trenton, and after getting suspended during the Double-A playoffs, he all but assured the end of his tenure in the Yankee organization. One guy whose name was floated around last year was Grant Duff. He never showed much until 2009, when his fastball picked up a couple of ticks, but as a soon-to-be 28-year-old, he’s not a prospect anymore.

Injuries have doomed Alan Horne before; he’s expendable. The soon-to-be 28-year-old Josh Schmidt is nice to have and has had nice results in Double-A, but at his age, it’s safe to let him go. He’s pitching well in Venezuela, so perhaps a team will come along with an opportunity for him. After getting booted from the 40-man during the regular season, you can safely assume Wilkin De La Rosa won’t be called back soon. Kevin Whelan has always had talent, but if he doesn’t strike a hitter out (11.1 strikeouts per nine in 2010 between two levels), he walks them (5.5 walks per nine in 2010 between two levels). He can go.

Considering his inconsistency and inexperience, Heredia can be counted out. However, Betances is a no-brainer to add after his spectacular season returning from injury. Now we’re down to two roster spots.

Each of the guys remaining is pitching in a winter league; Wordekemper is in Mexico, while Heyer, Kontos, Pendleton, and Pope are making their cases in Arizona. As much as I love Wordekemper (as a 46th round pick in 2005, I have a soft spot for players who work themselves to the upper levels), he’s 27 years old. He has performed well in each of his stops through the minor-league levels and has had to prove himself to advance. He has struggled in his 8 1/3 innings in Mexico (10 hits, eight runs), and though he is just a level away from the big leagues, he probably won’t get a roster spot. Another team should pick him up given his track record, so it wouldn’t be surprising to see him get a long look for a club looking for extra arms.

Heyer is a curious case. He has not pitched above High-A but has posted ridiculous strikeout-to-walk ratios throughout his career and is a ground-dweller’s worst enemy. If he hadn’t been added to the AFL roster, we probably wouldn’t say he has a legitimate shot now. He has done a nice job in Arizona, but considering that Kontos, Pendelton, and Pope have all pitched above High-A and succeeded, it’s reasonable to think his inexperience counts against him.

On the mend from Tommy John surgery, Kontos looked decent in his return, but has been bipolar: either he’s brilliant or he’s awful, and there is no happy medium. However, he has had a sustained record of success in the minors. Before his elbow popped last year, he pitched well between Trenton and Scranton working as a starter. The Bombers brought him along the rehab trail as a reliever, which is what he is best-suited for, but it’s not the easiest way for him to accumulate innings. Kontos should be a one- or two-inning reliever in the majors, and he was knocking on the door last year. Should he be protected?

Another Tommy John veteran, Pendleton underwent the procedure in 2006, the year after he was drafted. He has worked as a starter, bumping through the minors at about a level per year. His breakout campaign came in 2009, when he tossed 104 2/3 innings at Tampa, allowed 43 runs (30 earned), and posted a 2.81 strikeout-to-walk ratio. He was promoted to Trenton, where he struggled. A major factor in that was his huge jump in homer rate—he went from 0.1 homers per nine in High-A to 0.8 in Double-A.

In 2010, Pendleton started in Trenton, where he pitched reasonably well and moved up to Scranton. However, his homer rates continued to bite him, and because he doesn’t get a whole lot of ground balls (in 2010, his ground-ball/air-out ratio was 0.79), that doesn’t bode well for pitching in Yankee Stadium. Though the 27-year-old still gives up fewer hits than innings pitched, his walk rates have been increasing since his stop in Tampa while his strikeout rates dropped off this season.

Then there’s Pope, a 24-year-old righty who hasn’t reached Triple-A yet. He repeated Double-A in 2010 and was a middling starter until midseason, when the Yankees stuck him in the bullpen. Though he still had a tendency to give up the big inning, Pope looked fantastic, and with the increased velocity on his fastball, he bumped his K/9 from 6.8/9 in ’09 to 8.1/9 in ’10. His walk rates and homer rates also increased this season, which is troubling, though a little of it can be blamed on his time as a starter.

When it comes to choosing the last two roster spots, age and experience will be significant factors. For that reason, Kontos and Pope should get the final two spots. Pendleton has more experience than Pope, but he is also three years older, gets fewer grounders, and has similar homer tendencies. If the Yankees choose on upside, they have to choose the younger player; Pendleton could certainly improve with a move to the bullpen, but he’s entering his prime and time is running out for him to get better.