To the Mats with Reader Comments: The Extended Bullpen

Share All sharing options for: To the Mats with Reader Comments: The Extended Bullpen

Reader Joe suggests that I undercounted the number of relievers available to soak up the 500-plus innings the Yankees will need to get out of the bullpen:

I think what you’re miscounting here, Steve, is a strategy that’s worked well for the Yankees in the past 2 or 3 years (more so in the years prior to this year.) By having your bullpen comprised of players from your farm system with options, you can effectively turn your bullpen into a 13, 14 or 15 man squad by just sending a guy down after he’s pitched 2 or 3 innings and calling a new guy up. This, of course, assumes you have that sort of quality at those depths, but it’s a sound strategy and they’ve employed it successfully before. I suspect we’ll see something similar in 2011, with guys like David Phelps and Eric Wordekemper getting shots. I just hope this doesn’t lead to us arguing about whether or not Andrew Brackman’s should ‘pitch the eight’ because he comes up and dominates for 25 innings.

Steve, your point is a good one although the numbers you’re using sort of fail to take into account that inevitably some of those pitchers will be rotating in and out due to injuries. 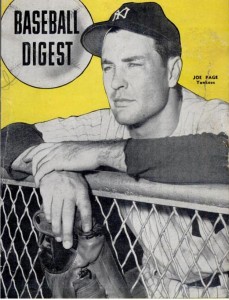 Joe Page: This lefty reliever once threw over a hundred innings a year for the Yankees, but those days are gone, so you've got to fill.

In a way, you’re both making my point for me. The way that I looked at the bullpen assumed that the Yankees, or any team, are efficient in choosing their seven relievers at the end of spring training. That is to say that the relief corps is composed of the seven best relievers in the organization. Now, the Yankees haven’t always done this, as evidenced by Joe Girardi’s in-season recalibrations in both 2008 and 2009, and the deacquisition of Chan Ho Park/acquisition of Kerry Wood this season. You can hardly say that a team has picked its platonic ideal of a bullpen when it signed Park in the first place. Still, you hope they’ve gotten close enough that we can broadly state that if you have structured your bullpen such that you can’t put all of your innings on those seven relievers, the next choice would be the eighth-best pitcher, the one after the ninth-best, and so on.

This is, admittedly, a highly simplified model, because things change over the course of the season, and your objective reliever rankings, if such a thing were possible, will be fluid. A converted starter who wasn’t even on your reliever list will suddenly place. Like the White Sox, you could draft a nigh-instant major leaguer like Chris Sale. Reliever #17 might add a cut fastball or add two miles an hour to his fastball and suddenly rates as reliever #6. Complicating this is the focus on platoon issues; a team will sometimes choose to put on the roster its best pitcher who happens to be left-handed rather than simply the best pitcher. There are also the inevitable injuries to grapple with.

Still, the point applies in most circumstances. Most teams don’t have 15 quality relievers to choose from in making out their roster. Despite all their pitching prospects, you could argue that this season the Yankees didn’t even have seven given their usage of Sergio Mitre, Dustin Moseley, and Chad Gaudin.* In many seasons at least one team, such as the 2010 Diamondbacks, doesn’t even have one. A more realistic spread is that you a couple of very good relievers, a couple of average ones, and one or two guys you don’t want to pitch unless you’re up or down by a touchdown. The fewer innings pitched by the good ones and average ones, the more that are displaced on the bad ones. Given an infinite roster and an infinite supply of decent pitchers, it wouldn’t be an issue, but we know that’s not the case.

*A subject for another time: the utility of using veterans who have no chance of expanding their role in trash-time relief versus utilizing a youngster who could grow into a higher-profile job in the following seasons.

Because you have teams with highly specialized left-handers spending a full season on the roster but pitching only 35-55 innings, it is essentially impossible for teams to (A) list its best seven, since a 35-inning reliever can hardly qualify as an ideal option, and (B) forcing it to rotate in other relievers, relievers who might have no business being in the majors or pitching in high-leverage roles. So, yes, the Yankees will have a taxi squad of extra relievers making the trip to and from Scranton—which is inhumane by itself—but that doesn’t guarantee good results. For most organizations, it would be the opposite, as the deeper they reach, the more desperate the choices.