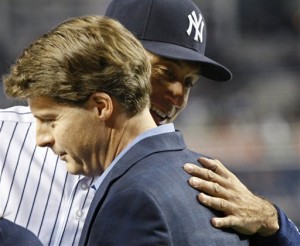 Going head-to-head with Derek Jeter is just one of the tough tasks Hal Steinbrenner has on his plate this winter (AP).

In Tuesday's interview with Michael Kay (which aired on YES and on ESPN Radio), Yankees managing general partner Hal Steinbrenner discussed the team's offseason outlook. As has been the case since he took the wheel in late 2007, the more rational of George Steinbrenner's two sons didn't shake much earth with his comments. Among the "revelations":

• The Yankees' 2011 payroll won't be drastically different than in 2010, when their opening day roster totaled a major league high $206.3 million, the third straight year the Yanks have been above $200 million, but still lower than their 2008 high of $209.0 million. Not surprisingly, the organization believes a similar expenditure should be enough to remain a powerhouse. "I can safely say we're going to stay within the same level," said Steinbrenner, "But I'm obviously not going to get into details. We know we're expected to field a championship caliber team and we're going to do what it takes to do that."

• Steinbrenner absolutely want both Mariano Rivera and Derek Jeter to return, and has reached out to the representatives of both players.

• That said, he doesn't expect negotiations with Jeter to be particularly smooth, because the iconic 36-year-old Yankee captain won't simply have carte blanche. "I'm running a business. I have responsibilities," said Steinbrenner. "[Co-chairman] Hank and I are responsible to our partners... We have to remain somewhat objective."

All in all, it was a slow-news-day type of conversation with a man who plays his cards pretty close to the vest. While that won't sell as many papers as a fire-and-brimstone rant from good ol' Boss Steinbrenner, it's a shrewd strategy.

With little else to pick apart, let's stroll through the Yankee payroll to understand where Prince Hal is coming from and where he must go, starting with the free agents who are coming off the books. I'm sticking with the opening day roster and payroll for purposes of accounting, since that's the easiest and most common reference point to use. All salary amounts — which may include amortized bonuses — in millions of dollars, are taken from the invaluable Cots' Baseball Contracts:

That's $70.8 million in 2010 salary coming off the books, if you also include the $500,000 of the dearly departed Melky Cabrera's salary which the Yankees paid to the Braves. Park and Winn, of course, are long since gone, and I haven't included the partial-season salaries of in-season acquisitions Kerry Wood, Lance Berkman or Austin Kearns, since they were accounted for with their original teams. As was the plan when they were acquired, the Yankees declined the options of Berkman ($15 million, with a $2 million buyout) and Wood ($11 million, no buyout) as well as Johnson ($5.5 million, with a $250,000 buyout). Kearns didn't even have an option, nor did Thames, though it's not out of the question that either returns in 2011. Gaudin was outrighted off the roster the other day and became a free agent. Subtract $70.8 mil from $206.3 mil, and that's $135.5 mil of 2010 salary which is returning, but major holes in the rotation, at shortstop and at closer. There are also a whole lot of raises to hand out, some of them etched in stone, others with more leeway.

Currently, the Yankees have the following money committed:

That's $146.1 million right there for eight players who figure prominently in the team's 2011 plans and three who don't; Marte will be out until at least midseason due to shoulder surgery, Igawa is likely to serve out the final year of his contract while flopping in the finest hotels the International League can offer, and Brackman — to my knowledge the lone recent Yankee draft pick with a major league contract, meaning that he takes up space on the 40-man roster — will almost certainly begin the year in the minors, either at Double-A Trenton or Triple-A Scranton/Wilkes-Barre. But he gets paid just the same.

Of course, the Yankees also hold the rights to several other players, though the dollar amounts aren't specific at this time. Some of those players fall into the "pre-arbitration" class, which means they have less than three years of service time and will make a salary based upon the major league minimum ($400,000 in 2010), plus adjustments for service time and other considerations. These players have virtually no leverage when it comes to their salaries. Teams aren't even obligated to negotiate contracts with such players; they can renew them unilaterally if they so choose, though that's sometimes seen as an inflammatory gesture which pours the fuel on the fire of future negotiations. The following Yanks on the 40-man roster fall into this class:

That comes in slightly less than $2.7 million for the players I've named. I haven't bothered to include Jonathan Albaladejo, Reegie Corona, Colin Curtis, Steve Garrison, Greg Golson, Melky Mesa, Hector Noesi, Ivan Nova, Eduardo Nunez, Kevin Russo or Romulo Sanchez. Some of them you may never heard of unless you're a prospect buff; all of them are currently on the 40-man roster, but only a few of them figure even peripherally in the Yankees' 2011 plans. The guess is that they could all start the year in the minors, where they'll earn even less than the major league minimum; the same could go for Cervelli, if/when Jesus Montero (who's not on the 40-man roster yet) wins the backup backstop job. Even the players in this class who are on the major league roster and do figure prominently for 2011 — Gardner and Robertson, in particular — will be hard-pressed to earn 10 percent raises over 2010, but if we assume they all do across the board, that still comes to just $2.9 million. So that's $149 million so far.

The rest of the players who concern us are under club control as well. They have between three and six years of service time and are thus eligible for arbitration, which means their salaries can be expected to climb significantly over 2010; some of them might wind up signing multi-year deals which add payroll certainty down the road and reduce the need for player and management to go to the mattresses for every last dime. Alternatively, they can be non-tendered, which means the Yankees wouldn't offer them a 2011 contract, making them free agents. Because teams can only cut salaries by as much as 20 percent via renewal or arbitration, non-tendering can be used as a route to re-signing a player at a lower salary.

Hughes and Chamberlain, the two most valuable players here, are in their first years of arbitration eligibility. As a starter, Hughes could make somewhere in the neighborhood of $4-5 million on a one-year deal, while a bullpen-bound Chamberlain could make $2-3 million. Figure that's around $7 million between the two if the Yankees don't hammer out longer-term contracts. Mitre's in his third year of arb eligibility, but he's entirely fungible, a non-tender candidate. At best he might make $1 million if the Yankees feel generous. Logan, who's in his second year of eligibility, and Moseley, who's in his first and who also falls into the potential non-tender pile, are both likely to top out at $1 million as well, but could earn less. All told, that's about $10 million, pushing the running total to $159 million for 19 roster spots.

That leaves $47.3 million between our worksheet number and the Yankees' 2010 opening day mark, the money with which the Yanks are supposedly going to squeeze in the contracts of Jeter, Rivera, Pettitte (if he doesn't retire) and their marquee free agent target, Cliff Lee while finding a couple more bench bats and bullpen arms, all while still essentially holding the line on last year's payroll. Given that the "core three" here made $49.4 million in 2010 and that Lee could command upwards of $20 million given the contracts of Sabathia and Roy Halladay ($20 million), you can see the challenge Steinbrenner and Brian Cashman face.

Quite simply, the Yankees will have to get creative in multiple places to make a Lee deal happen, either ever-so-delicately cutting the well-decorated stalwarts' take or shedding salaries via trade, since simply adding Lee's salary to the existing payroll would mean around a 10 percent increase — a significant step beyond where the Yanks have been over the past three years. The former tack is a tall order both politically and from a baseball standpoint, no matter how hard a line Steinbrenner would like to take; beyond the Jeter question, replacing the production of Pettitte and Rivera will still cost considerable money. The latter tack would probably require the Yankees to trade either Granderson or Swisher, the two most reasonably-salaried starters. Not that doing so for either is advisable, because the Yankees still have to fill those slots in the lineup with productive ballplayers. Another alternative would be to get rid of Burnett, but that would likely require eating half of his remaining $49.5 million salary over the next three years, and unless the Yanks are committing to Chamberlain rejoining the rotation (sigh), they would still have to pay another starter.

Yes, kids, it's going to be a very interesting winter in the Bronx.