Jon Heyman wrote today that "industry sources still say they wouldn't be surprised if [Derek Jeter] initially sought to obtain a six-year deal to match the expiration age of Alex Rodriguez's contract, which would put Jeter at 42." If true, this is a nigh-hubristic position for a player of Jeter’s age and production to take. On one hand, it is unrealistic to get worked up about the years, because the years are unrealistic. I don’t think they’re meant to suggest that Rodriguez will be a productive player at 42, but that the Yankees could not or did not want to afford paying Rodriguez $40 to $60 million a year over five years, so they paid him $20 to $40 million a year for 10 years. The same would be true with a Jeter contract that lasted six years. He can’t play now, so why would anyone with the Yankees, on their most optimistic, Panglossian day believe he could play well three years from now, let alone six? The answer is, they don’t. Any contract over a year or two they give Jeter will be a concession to his past history and marketability, not any unrealistic faith in his ability to play. 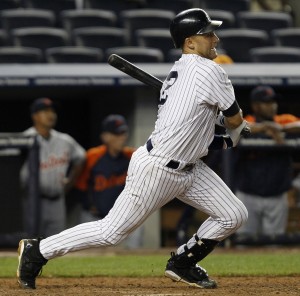 It’s a shame that they have to give in. Whatever you think of Alex Rodriguez personally, or about the wisdom of his contract, A-Rod can make this argument about his extended contract: however unlikely he is to justify all of it, he’s a power hitter, and power hitters can endure the loss of their batting average and even their defensive ability, because they should retain a modicum of ability to put runs on the board. Hank Aaron was still a very good player at 40 and was close to a league-average player at 41 and 42. Willie Mays still had something to give at 41, before diving off the cliff at 42. There is no guarantee that Rodriguez will follow in their footsteps. It’s not even likely. However, it is a possibility.

Contrast that with Jeter. Everything he does is about batting average. Have players 37 and older hit over .300 over the rest of their careers? Sure; there have been nine of them since World War II (minimum of 1200 plate appearances), most recently Moises Alou (.312), Barry Bonds (.325), Tony Gwynn (.343) and Paul Molitor (.309). Note that you have three outfielders and one designated hitter; the defensive demands of shortstop haven’t allowed very many shortstops to get even 1200 plate appearances after their 36th year. Just seven have been allowed to play that much in the postwar era (parenthetically, when does this stop being the postwar era? When there’s another world war?). Of those, Luke Appling hit .300. None of the remaining half-dozen hit over .276. As we saw this year, Jeter can’t be productive at .276. Alex Rodriguez had a down year, but still hit 30 home runs; you can argue that he’s in decline, but not that he’s done. You can make a far more convincing argument that Jeter is done, particularly when defense enters into the position.

The more you think about it, the more irritating the whole concept of offering Jeter a multi-year deal becomes. His age is real. Even if his game hadn’t collapsed this year it would be a real issue for the Yankees to cope with. As I said above, just a handful of shortstops have gotten regular playing time at 37 and older, and those that did, like Ozzie Smith and Omar Vizquel, had defensive chops that Jeter couldn’t dream of at 25. They had room to lose half a step. Jeter never had half a step; he’s in some kind of physically impossible negative space now, retreating through time with each grounder, so for each step he takes towards the ball he actually gets further away.

Sure, that’s hyperbolic, but it’s what the Yankees will be signing up for, and all under the mistaken impression that some journalists have, or I have, or you have, maybe even the Yankees have—and Jeter apparently definitely has—that they are under some obligation to reward him for past services by giving him a deal of longer than a year. I’ve read a lot about baseball, but maybe some of you are more educated than I am, but where is it written that the Yankees have to ignore over 100 years of history, ignore the evidence of their own eyes, and wreck their ballclub through fealty to an aging ballplayer? I’ve said this before: if it was good enough for Babe Ruth, it’s good enough for Derek Jeter, and Ruth, too fat to bend over and pick up a ground ball, got gone.

Earlier today, Jeter’s agent, Casey Close, responded to Hal Steinbrenner’s media tour of the last couple of days by saying, "Clearly, baseball is a business, and Derek's impact on the sport's most valuable franchise cannot be overstated. Moreover, no athlete embodies the spirit of a champion more than Derek Jeter." You hope that this is just agent-speak and not what Jeter truly believes, because if so, he’s making the same mistake did when Joe Torre told George Steinbrenner that his teams made the new ballpark possible. No, no, no, no, no. Winning makes new ballparks possible. Winning brings the crowds. Fans like a star, but they love winning. Has Jeter added value to the Yankees? No doubt. Did the brand preexist him for most of a hundred years and continue on after he’s gone? You bet. And Jeter’s value is transient. We all pay homage to Jeter’s celebrity, but when he is actively getting between the team and its next championship, that celebrity will boomerang faster than you can say "Brett Favre," because the real "spirit of a champion" is knowing when to get the heck out of the way.

The worst thing that could happen to the Yankees right now is for them to get baited into bidding against themselves. Another team wants to outbid them on Jeter, and Jeter is willing to tarnish his legacy by moving on? Let ‘em. Eduardo Nunez isn’t the team’s long-term solution at shortstop, but the combination of six innings of him, a pinch-hitter, and Ramiro Pena would get the Yankees through the season in a manner comparable to what Jeter did in 2010. Sure, it would hurt. Sure, even I would like to see Jeter prove me wrong and stage a comeback, and I will be sorry if it doesn’t happen. But it is preferable to forgo that than to see the team carry a useless player, get older, give up other opportunities because of the dollars devoted to an old man.

If the Rangers offered Cliff Lee straight up for Jeter, you would make that deal. The Yankees may find room for both this winter, but at some point, they will fail to add someone else, someone who could have helped more than a superannuated shortstop who is indulging his fantasies of still having something to give. This is the New York Yankees, not the New York Enablers. If Jeter is truly insistent on a deal of the length that has been reported, or even two-thirds of that, the Yankees have to take a hard line for the good of the franchise.