Share All sharing options for: Imagining Sparky in Paradise

I was saddened to learn today that Sparky Anderson has been placed in hospice care due to dementia. The Hall of Fame manager was always entertaining due to his forthright, hyperbolic way of speaking. There was no Tigers rookie that he wouldn’t offer his highest endorsement, so periodically you would hear that Anderson thought that some inoffensive player like Mike Laga was headed for Cooperstown. He didn’t really believe that, of course; at least, I don’t think he did. He was trying to instill confidence in some fairly marginal young players. This seemed to backfire sometimes, putting too much pressure on kids who couldn’t possibly live up to the hype. Similarly, when Anderson was asked about Thurman Munson’s performance in the aftermath of the 1976 World Series, he said that no one should embarrass a player by comparing him to Johnny Bench. What he meant as a compliment to Bench came out as a slam of Munson. 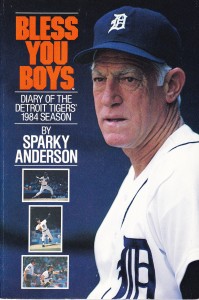 As the 1976 World Series suggests, Anderson was a major thorn in the Yankees’ side, both in the 1976 World Series, when his Big Red Machine swept the Yankees, to seasons in the 1980s when the Tigers were the team the Yankees just couldn’t catch up to or stay ahead of. One of the most humiliating, nigh-historic regular season defeats suffered by the Yankees came at the hands of the Tigers on June 20, 1988. The Yankees entered Detroit trailing in the American League East by half a game. Manager Billy Martin’s behavior had been somewhat erratic and his job was rumored to be hanging by a thread (as always). In the first contest of the three-game series, the Yankees carried a 1-1 tie into the bottom of the tenth after a strong start by Tommy John. Martin brought in right-handed reliever Cecilio Guante to face right-handed third baseman Tom Brookens. One home run later, the Yankees were down a game and a half. The next night, the Yankees took a 6-1 lead into the bottom of the ninth, but closer Dave Righetti was ineffective, loading the bases and walking in two runs before Martin called for Guante to face Alan Trammell. Trammell put a Guante offering into the seats for a grand slam and the Yankees went down 7-6. The Tigers completed the sweep on June 22, and Martin was let go that night. It is only with a touch of exaggeration that I say that the Yankees didn’t recover from that drubbing until 1994.

It’s not my purpose to eulogize Anderson, since he’s still here, only to remember a successful, garrulous manager, the first to win a World Series in both leagues, and one who had many clashes with the Yankees over the years. A favorite of mine, one which Sparky lost, came later the same year as the Guante games, on September 11, 1988 at Yankee Stadium. Both the Yankees and Tigers were still on the margins of a race without a wild card, trailing the Red Sox by a handful of games with about 20 left to play. It was a Sunday afternoon, the perfect time for a game that lasted six hours. Doyle Alexander started for the Yankees, while Al Leiter began for the Yankees. Thanks to a Jack Clark home run and assorted other hits, Leiter took a 3-1 lead into the top of the fifth. When he allowed the first two batters to reach, bringing Trammell to the plate, Lou Piniella pulled him for righty Neil Allen. In the short term, it was the correct call, Lou’s quick hook working for him (quick in terms of innings; Leiter, customarily wild, had thrown over 90 pitches—no one cared back then) as Allen stuck out Trammell and Chet Lemon and got Dave Bergman to fly out, stranding the runners.

Needing a long man, Piniella stayed with Allen. The Tigers began to pick. They scored a run in the top of the sixth to make it 3-2, and in the top of the seventh Trammell—that man again—socked a solo shot to tie the game. The universe froze. Neither team could score. A game that began at about 1:30 was still going at 7:30. Anderson had a unique tactical advantage in this game. He had begun his career as "Captain Hook," known for going to the bullpen quickly. By the end of his career, he was sliding to the other side of the spectrum. Alexander went eight innings. Closer Mike Henneman, who started one game (in the minors in 1984) in a professional career that lasted 13 years, pitched seven scoreless innings. The Tigers were well on their way to completing a doubleheader in one game, yet Sparky had barely scratched his bullpen. Today, we’d be wondering when Joe Girardi would be bringing Nick Swisher in to pitch. Piniella also used his pitchers in a way unusual for today, albeit on a smaller scale, leaving closer Dave Righetti in for 3.1 innings.

The Tigers finally broke through in the top of the 18th. Future Yankee Matt Nokes reached on a Don Mattingly error (it happened occasionally). Future Yankee Tom Brookens bunted him over to second. Future Yankee Torey Luvullo, who had had the first hit of his major-league career the day before, grounded a ball up the middle for an RBI single. Tough left-hander Willie Hernandez, the team’s former closer, was already in the game and stayed in to finish the game. He walked Rickey Henderson to open the inning. This brought Claudell Washington to the plate. Washington was pretty strictly platooned in those days, and Hernandez was tough on lefties. Would Henderson steal to get into scoring position? What if he stole and then Washington bunted? That might work… Washington came up with a much simpler solution. Before Henderson could go anywhere, Washington took Hernandez’s 0-1 pitch and lined it deep into the right field bleachers for a home run. The Yankees were walk-off winners and a high point in a very difficult season.

If Anderson had a comment on that game I don’t recall it. I’m not sure it would have been printable. Anderson admired Casey Stengel and tried to emulate his manner of speech to some degree, but he didn’t have the same sense of humor. He also didn’t have the same tolerance for pain; where Casey was elliptical about his feelings, Anderson was blunt. Where Casey could laugh off a loss, Anderson wore the strain on his sleeve, and on his face. He retired at 61; he looked at least 10 years older. There is probably no connection between the stress of the 4000-plus regular and postseason games that he managed and his current condition, but if a doctor told you that those pressures took a toll on him that resulted, years later, in the burning out of his faculties, you would believe it, think it was poetic, perhaps, and wonder if Anderson would have appreciated it. He was a baseball man, loved the game of baseball, loved being an ambassador for the game. He might have been willing to pay the price.

There is no computer that can record our memories and save them for posterity, or allow them to be re-imprinted on us when we lose them. I’m not religious, but I hold out hope for a better place where all that we lost will be restored to us. Oh, the stories Sparky Anderson could tell there.