Yankees Vs. Giants: A Mercy

Share All sharing options for: Yankees Vs. Giants: A Mercy 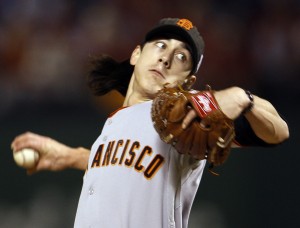 Tim Lincecum in Game 5: The Yankees were spared this. (AP)

That the Giants won the World Series is a wonderful thing. The club and its fans had waited a very long time, really its whole history given that the last time the team won it was playing in another city. This is one of the few times that the decision to move has been rewarded; after drawing well their first few years in San Francisco, the novelty wore off, and attendance was so poor throughout the 1970s that the club was very nearly sold to Toronto interests and relocated. Surely the miserable Candlestick Park contributed to the attendance shortfall, but even now that the club plays in scenic AT&T Park*, it has settled in as a good draw, not a league leader. In some parallel world, there is an alternate history of the Giants in which they remained in New York, became the city’s sole National League team, and the Mets never came into existence.

*AT&T Park has gone by three names in 10 years, previously having been PacBell Park and SBC Park. In the Giants, corporate naming rights for stadiums has reached the point of self-parody. If it’s Tuesday, it must be AT&T Park—although you could argue that the Astros got there first with Enron field.

The Yankees and the Giants have played each other in seven World Series. John McGraw’s Giants won the first two; since then it has been all Yankees, the Bronx team knocking off John McGraw’s 1923 unit, two teams managed by Bill Terry, Leo Durocher’s 1951 squad, and Alvin Dark’s 1962 juggernaut. This current champion could pitch with any of them, which is quite a compliment given that these previous teams possessed Hall of Fame hurlers like Christy Mathewson, Carl Hubbell, and Juan Marichal. There is no way of knowing for certain, but it seems unlikely that had the Yankees somehow beaten the Rangers—the same Rangers who were so thoroughly thrashed by this Giants team—they would have suffered the same fate.

The Giants’ offense is nothing special and it wasn’t particularly special in this series. Their pitching staff is. The starting rotation is four deep, five deep if you consider that Barry Zito, who wasn’t even on the Series roster, was about a league-average starter this year—another way of saying that he wasn’t A.J. Burnett. Even if on paper Yankees hitters tower above those of the Giants, a hypothetical World Series conflict would have quickly devolved into mismatched starter pairings. Tim Lincecum is a more dynamic starter than CC Sabathia at the moment, and that’s without the added consideration that Sabathia was pitching on a bad knee. You can rate Matt Cain-Andy Pettitte a tossup if you like, but Jonathan Sanchez (at least on paper; his wasn’t the greatest postseason) is a left-hander designed to give the Yankees trouble, and if you don’t have him you have Madison Bumgarner. The Yankees would have had to respond with Phil Hughes and A.J. Burnett, and the former is inconsistent while the latter appears to be a lost cause.

As such, when the Giants won my first thought was to be happy for them, happy for the continuation of the proud history of this nearly 120-year old franchise. My second thought was, "I’m glad we were spared watching the Yankees go through this." A shocking upset at the hands of the Rangers

was a more dignified—and potentially more instructive, should the Yankees choose to see it that way—exit than simply being dominated by a great staff.