How Do You Spell Relief?: The Lefties

Share All sharing options for: How Do You Spell Relief?: The Lefties 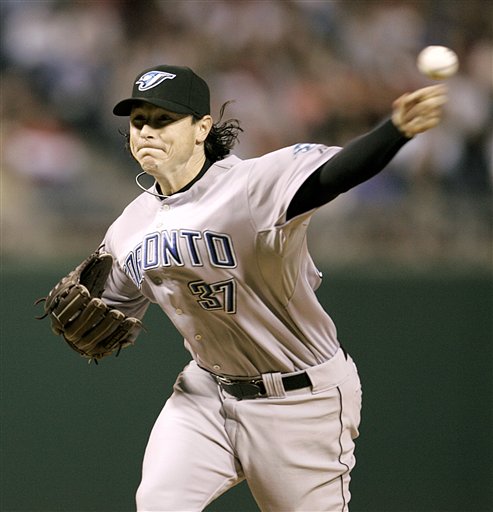 Scott Downs is the obvious choice for the Yankee bullpen unless there's a draft pick attached to his price tag. (AP)

In writing about the 2011 player options the Yankees declined last week, I mentioned that, while I do think the Yankees could stand to import a relief pitcher for next season, I didn't think that pitcher should be a 34-year-old Kerry Wood. Since then, Brian Cashman has said that adding a lefty reliever to compliment incumbent LOOGY Boone Logan will be among his priorities this offseason. Steve dropped some science on that last yesterday, speaking in general terms about the workload strain having two pitchers who average less than an inning per appearance can have on the rest of the staff. Today, I want to talk in specifics by breaking down the relief pitchers expected to be available via free agency this winter.

First, here is what the Yankee's bullpen looks like heading into the offseason:

Rivera is a free agent, but guaranteed to return. Aceves missed most of 2010 due to a bulging disk in his back. He never did have surgery on the disk, so we have to be somewhat cautions in our expectations for him in 2011, though certainly it would be a boon (no pun intended) to have him back and fully effective. A healthy Aceves would effectively eliminate the need for one of the bottom three utility pitchers, Mitre, Moseley, and Gaudin, all of whom are arbitration eligible this winter and thus non-tender candidates.

I'd love to have included Jonathan Albaladejo on this list, but the Yankees made it clear this year that he's not in their plans, and now that he's out of options, I don't expect to see him in pinstripes next year. Ivan Nova is a candidate for a swing-man/long-relief role if the Yankees don't see a spot for him in the rotation, and Romulo Sanchez is another in-house option for the bottom of that list. Adding a free agent reliever could thus result in a 2011 bullpen that looks like this:

I like that. Dropping the three arb-eligible duds makes room for some younger, better, cheaper in-house options and clears up a bit of cash for Chamberlain and Logan, both of whom are also arbitration-eligible. I don't expect Rivera will cost more than the $15 million he made in each year of his just-completed three-year deal, and could actually see his salary scaled back a bit. So spending a bit of money on a quality set-up arm doesn't seem excessive or problematic.

As for who that imported arm should be, I have boiled the list of free agent relievers down to 14 lefties and 25 righties (not including Rivera). I'll spare you the full lists, but I'll break down the left-handed candidates today and return tomorrow with a look at the righties.

Cashman says he wants a lefty. Goldman says a second LOOGY would be suicide. The vast majority of lefty relievers on the market are, of course, matchup-lefties, or LOOGies (Lefty One-Out Guys). In that group are Pedro Feliciano, J.C. Romero (on whom the Phillies hold a 2011 option), Joe Beimel, Will Ohman, Dennys Reyes, Ron Mahay, Randy Choate, and Randy Flores.

That leaves six men on my list of 14 lefties. Of those seven, Brian Fuentes is likely to try to sign with a team that will let him close. Here then are the final five: Scott Downs, Arthur Rhodes, Jeremy Affeldt, Hisanori Takahashi, and Mark Hendrickson.

Downs and Rhodes could be problematic in that they are both Type-A free agents, meaning that if the Blue Jays and Reds offer them arbitration, they will cost whatever team signs them a first-round pick in the rich 2011 amateur draft, a price too high to pay for an aging reliever (Downs will be 35 next year, Rhodes 41). Hendrickson, meanwhile, will be 37 next year and is more of a Moseley/Mitre type, a former starter with middling stuff. Never mind that the Orioles hold an option on him for 2011, no organization with the pitching depth and financial resources the Yankees have should be bringing that type of player into camp as anything other than a non-roster invitee, no matter which hand he throws with.

That leaves us with Affeldt and Takahashi.

Affeldt is, at 32, the youngest of the 14 men on my original list and just won a World Championship with the Giants. Yankee fans likely best remember him as a struggling youngster with the Royals, who couldn't decide if he should start or relieve. Affeldt was mercifully traded to the Rockies in mid-2006 and, having finally settled in as a pure reliever in the senior circuit, has been one of the better set-up lefties in the National League over the last four seasons, posting a 3.14 ERA over that span while striking out 8.1 men per nine inning, albeit against too many walks (4.1 per 9IP).

What makes Affeldt more than a simple LOOGY is that he has actually had a slight reverse split over that span, with lefties hitting .252/.346/.395 against him and righties hitting .239/.324/.359. I mention that as a positive, but if you're specifically after a lefty, you might want one who is harder on his own kind than that. There are also always concerns about bringing a pitcher out of the pitching friendly NL West and putting him in the hitting-heavy AL East. Still, Affeldt is a viable full-inning or even multiple-inning set-up man (note his two perfect innings in Game Six of the NLCS against the Phillies), who just happens to throw with his left arm.

Takahashi, is older (36 in April), and has spent just one year in the States after a career as a starter in Japan, but in his rookie season with the Mets this year he pitched well out of the bullpen and actually finished the season as the Mets' closer after Francisco Rodriguez's life and career imploded. Takahashi posted an 0.81 ERA with 20 strikeouts against just six walks and one homer in 20 relief appearances after August 15, only two of which lasted less than a full inning and four of which lasted longer, including a pair of scoreless two-inning outings. There's not a lot of track record there, Japanese pitchers often suffer harsh corrections after their rookie seasons in the States once their deliveries and offerings seem less exotic, and his stint as a closer could drive up his price, but the results are certainly compelling. What's more, Takahashi does have a shut-down split against lefties (.217/.274/.270), giving his team the best of both worlds, a lefty who owns lefties, but can still work full- and multiple-inning outings.

Going back to the Type-A guys, Downs and Rhodes, I imagine the Reds will move to keep Rhodes. That's fine. As a 41-year-old with a history of folding when he sees midnight-blue pinstripes, Rhodes isn't a pitcher I'd have much confidence in if I were the Yankees, even though I think he'll continue to excel for Cincinnati.

As for Downs, who will be 35 in March, unless the Jays want to keep him, they shouldn't offer him arbitration. Yes, Downs is highly sought-after, but if a first-round pick is attached to his price tag, it could kill the market for his services. Just look at what happened when the Braves offered Rafael Soriano arbitration last year. The draft pick scared off his suiters, and he wound up accepting arbitration, singing a one-year deal beyond the Braves' budget, then being flipped to the Rays.

Maybe that's a strategy. Maybe the Jays like the idea of having Downs on a one-year deal as an off-season trade chip. There's also just one week between the date teams have to offer arbitration and the day players have to accept it this year, which could limit the time Downs has to get a feel for the market for his services with a draft-pick attached. Still, if the Jays decide not to offer him arbitration, it's pretty clear that he should be the Yankees' target. Over the past four seasons, pitching in the AL East, Downs has posted a 2.36 ERA with a 1.15 WHIP and 2.63 K/BB. Over that span, lefties have hit .201/.274/.297 against him, while righties have hit just .238/.307/.329.

Downs, without an arbitration offer, might be the best set-up relief option on the free agent market regardless of throwing arm, but even Downs isn't worth a first-round pick on top of the expense of his contract, and there are many right-handed options that are preferable to Affeldt and Takahashi. Tune in tomorrow for a look at just who they are.