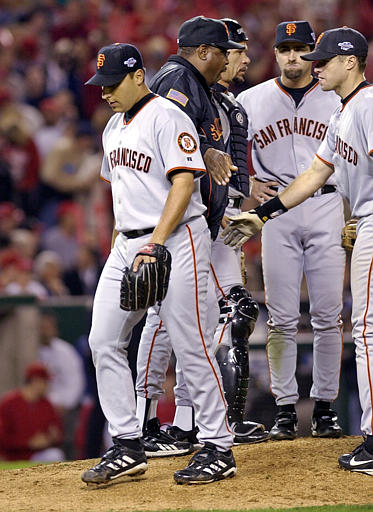 Dusty Baker let Russ Ortiz keep the ball as a souvenir when he removed him from Game 6 of the World Series with the Giants seven outs away from their first World Championship in San Francisco. Tonight, eight years later, the Giants might finally get those final outs. (AP)

There's a lot of history at stake in tonight's fifth game of the World Series. From my Game 5 preview at SI.com:

The Giants have not won a world championship since moving to San Francisco more than a half century ago (1958). Their last title came 56 years ago, in 1954, when they still played in New York. That is the third-longest active title drought in the majors. Since moving to San Francisco, the Giants have been in the World Series three times. They never held a lead in games in the 1962 or 1989 Series, the latter of which was a sweep at the hands of the cross-Bay A's. Only in the 2002 Series did the Giants get within one win of ending that drought. San Francisco took a 3-2 lead into Game 6 of that Series and led 5-0 in the bottom of the seventh but was outscored 10-1 over the remainder of the Series as the Angels came back to win the title.

Though long-suffering Giants fans would surely cringe at the following, their lead in this Series is far more secure. To begin with, just six teams in World Series history have blown a 3-1 lead in games, the most recent coming a quarter of a century ago, when the 1985 Cardinals got within three outs of the title in Game 6, only to choke it away in the wake of an egregiously blown call at first base by umpire Don Denkinger, then implode in Game 7. The last team to blow a 3-1 lead in the World Series while playing Games 6 and 7 at home was the 1979 Orioles, who were outscored 15-2 by the "We Are Family" Pirates in the final three games. Also, for what it's worth, the last team to be shut out twice in the World Series, as the Rangers have now been, and still win that Series was the 1959 Dodgers, but those Dodgers were up 3-1 after four games, not down 3-1. Those two shutouts were the Dodgers' only losses in that Series, the second of which came in Game 5 before L.A. wrapped things up in Game 6.

That's the context for tonight's matchup of Cliff Lee and Tim Lincecum. I'm rooting for Game 6, if only because I'm not ready for the season to be over just yet, but more than anything, I want a nail-biter, a tight pitchers duel with Lee and Lincecum both in top form.