It seems that the effects of the big club no longer in the running for its 28th title have oozed into the minor leagues; it wasn’t the greatest week down in Arizona for many Yankee farmhands. Keeping up with the Yankees, Don Mattingly didn’t have the greatest week playing skipper. However, good or bad, it’s time to look at what went on with the ‘Dogs. 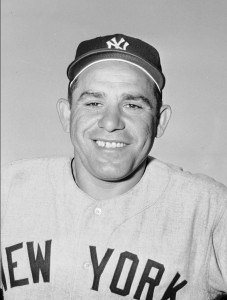 Austin Romine may someday hit as well as this guy, but will anyone ever talk about "Romineisms?" (AP)

Manny Banuelos, LHP: One appearance: 3 IP 7 H 3 R 3 ER 1 BB 4 K—The southpaw made only one appearance this week, a start on October 28 that did not turn out too well. More than a few balls were hit where they weren’t, but on the happier side, Banuelos only allowed one walk and struck out four. The AFL has not been kind to the Mexico native; with 22 hits in 13 IP, hitters have been happy to have a go at Banuelos so they can slap their troubles away. Nobody has taken him deep yet, and another bright side to Banuelos’ start is his 4.00 ground out to air out ratio. Don’t read too much into that, though. He’s not a worm beater by any stretch, but keeping the ball on the ground is a nice tool if Banuelos can do it more regularly.

Craig Heyer, RHP: One appearance: 2 IP 1 H 1 R 1 ER 2 BB 2 K—If Heyer was a bit off last week when he walked one, imagine the horrors of him giving up two walks in one outing. The righty has worked at least two innings in each of his appearances in Phoenix, and though he has given up a run in three of his four appearances, Heyer is very much a dark horse for a 40-man spot. Multiple-inning outings aren’t new to the soon-to-be 25-year-old, because he worked as a spot starter and innings muncher in Tampa. The more he can work, the better his chances of a roster spot, especially if he maintains his ground-ball special. While Heyer didn’t get as many grounders as he normally does in his two-inning stint on the 27th, he did pick up a couple of K’s. He hasn’t looked brilliant, but he has pitched better than George Kontos, and because he does have one major specialty—grounders—and Kontos does not, maybe Heyer will get some brownie points.

George Kontos, RHP: Two appearances: 2 2/3 IP 5 H 7 R 6 ER 4 BB 1 K—The majority of this awful line stems from Kontos’ outing on October 29, but it just wasn’t a great week for him. Let’s examine his line from the 29th: 2/3 IP 3 H 5 R 5 ER 4 BB—good for a 67.50 ERA. Yes, Arizona is a hitter’s haven, but look at the walk column—I apologize if I jinxed him last week. The environment did not cause Kontos to walk four batters; he couldn’t establish the strike zone and had a performance that would make Ron Washington proud… or at least one where Washington would leave him in to see if he could correct himself.

In his other outing this week, Kontos didn’t issue a free pass, but he got knocked for a pair of runs and hits in two innings of work. One poor week won’t keep him from a spot on the 40-man this winter, but when all of Kontos’ innings in Arizona are taken into consideration, the line isn’t pretty: 8 IP 15 H 13 R 9 ER 0 HR 5 BB 10 K, with only two "clean" outings. He has been getting grounders regularly, which is nice, but the overall results aren’t helping his cause, even in unfriendly confines for pitchers.

Brandon Laird, OF: 3-for-18 3 R 2 2B 1 HR 2 RBI 3 BB 5 K—There are certainly no complaints about the extra-base hits Laird has accumulated, because he will have to mash in the majors if he’ll serve as anything more than a four-corners backup. Perhaps he is following the Babe Ruth philosophy when it comes to hitting. "I swing big, with everything I’ve got," Ruth once said. "I hit big or I miss big." The problem with that strategy for Laird is that he’s nowhere near as talented as Ruth, and he’ll have to get on base more often if he wants to be a useful big-leaguer. The three walks is a major improvement for Laird, who seemingly lost all patience after getting bumped to Triple-A. The strikeouts are to be expected because Laird is a power hitter, but he’ll need to show a bit more discipline in the future.

Jose Pirela, SS: 7-for-18 4 R 2 2B 1 RBI 2 BB 1 K 1 CS—Pirela had a nice week, including a game in which he got three hits—two of them doubles. That certainly is something to celebrate, but his four fielding errors in just 12 games are not, nor is his overall batting line of .196/.260/.239. Let’s focus on the positive. Pirela had a very good week; he showed a modicum of power and drew a couple of walks, both of which had not shown up in his game lines since the regular season ended.

Ryan Pope, RHP: Two appearance: 2 2/3 IP 3 H 1 R 1 ER 1 BB 1 K—In Pope’s two-inning relief appearance on the 26th, he looked great, allowing no runs, hits, or walks, but also not recording any strikeouts. Most of his outs came in the air, which can get him in trouble, because he isn’t a complete stranger to the home run—his homer rates jumped from 0.45 per nine in ’09 to 0.95 in ’10. In his relief appearance on the 30th, which came when Phoenix was blowing out the Mesa Solar Sox but started to give the lead away late in the game, Pope did serve up a meatball in 2/3 innings. Overall, he has done a solid job in Arizona, with only two bugaboos in which he gave up at least three hits.

Austin Romine, C: 3-for-12 1 R 1 2B 0 RBI 1 BB 3 K—The last two weeks haven’t been particularly kind to Romine, who should be dominating in the friendly hitting environment Arizona provides. On the happy side, he drew a walk. While you’ll never confuse him for Nick Swisher, Romine has steadily improved his walk rates from 5.7 percent in his first full season to 7.4 percent this year. It’s not as high as the team would like—his OBPs have hung in the .320s for the past two years—it’s progress.

The other lingering issue with Romine is passed balls. Though he has only played in 10 games so far, he is already up to four passed balls. He also hasn’t been able to stem the running game; his brother, Andrew, stole off him twice in one game this week. Some brotherly love.