Share All sharing options for: Falling Short: The Nuñez Plan 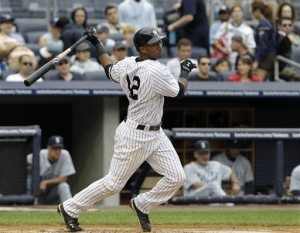 A plan with Eduardo Nuñez at its center creates more problems than it solves when it comes to the question of what to do with Derek Jeter (AP).

Last week, Uncle Steve took aim at the idea that the Yankees have a bona fide plan to move Derek Jeter to another position, suggesting that such a blueprint is mainly the province of sports talk radio. But as if on cue, Monday morning's column from Bill Madden in the New York Daily News claims that the Yankee front office does in fact have a plan in place beyond the 2011 season, and that it revolves around Eduardo Nuñez.

Superficially, it doesn't sound like the worst plan in the world. According to Madden,who didn't get any Yankee officials to go so far as to go on the record, the team would phase Jorge Posada out of the picture once his contract expires at the end of next season; he will have turned 40 by then, and presumably would have spent the year sharing the catching and DH duties with rookie Jesus Montero. His departure would open up the DH slot for Alex Rodriguez, and Jeter would shift over to the hot corner as Nuñez joins the lineup. We know Nuñez is the key to this plan, according to Madden, because GM Brian Cashman was unwilling to include him in the Cliff Lee package to the Mariners once the latter discovered second baseman David Adams was dealing with an ankle injury.

A closer look reveals that this plan probably creates more problems than it solves. Start with Nuñez. The 23-year-old Dominican (Madden refers to him as Venezuelan, but Baseball-Reference.com is the arbiter of such disputes, and it has him hailing from the D.R.) spent most of this year at Triple-A Scranton/Wilkes-Barre, where he hit .289/.340/.381, numbers that aren't terribly impressive; according to Baseball Prospectus' translations to adjust for the level and quality of competition, that's the equivalent of hitting .268/.312/.343 in the majors — essentially a replacement level performance. It's not that far off from the .280/.321/.360 Nunez hit in 53 late-season plate appearances, but it's a big step down from Nuñez's translated 2009 Double-A Trenton performance, which comes in at .314/.335/.421. Based on that line and his previous track record, BP's PECOTA forecasting system projected a .276/.311/.395 line for Nuñez in 2010; in other words, it essentially foresaw his gains in plate discipline but didn't expect his power to take such a dip.

That's a bit dismaying, and it's also a significant step down from even the .270/.340/.370 line Jeter supplied in a career-worst year. Hypothetically speaking, another year of growth from Nuñez and another year of decline from Jeter could make those two contributions converge, but then there are also questions about the would-be successor's defense. Madden quotes one scout hailing his arm strength but bemoaning his lackadaisical attitude in the field, and another saying the ability is there but he's got a lot to learn — your typically ambiguous scout-speak. Meanwhile, while Baseball America named Nuñez the best defensive shortstop in the International League, other prospect experts are hardly sold. Baseball Prospectus' Kevin Goldstein termed Nuñez's defense "sloppy" coming into the year (he's no real fan of his bat, either), and ESPN's Keith Law was even less optimistic — outright dismissive would be a better way of putting it — about the total package.

The problem with the weak bat/questionable glove combo Nuñez would provide is that it's not replacing Jeter's production, it's duplicating it. The Captain would be learning a new position at age 37, and while it's technically an easier one in that it requires less athleticism, Jeter's strengths aren't a great fit; he has the arm strength for the hot corner, but lighting-quick reflexes aren't his strongest suit, and he moves to his left about as well as Dick Cheney. Worse, the offensive bar at third base is a higher one than at short, and it's increasingly unlikely an aging Jeter could clear that bar.

Elsewhere in the infield, the Nunez plan would force Rodriguez off third base and into the DH slot full time, which creates a few more problems. For one, even given his hip woes, A-Rod's not a horrible fielder; he was below average in 2009 and 2010 according to UZR and Plus/Minus, but above average according to FRAA, and a few runs ahead of Jeter (but still slightly south of average) if you average all three systems together during that timespan to gain a better consensus.

Furthermore, one of the big problems with having a full-time DH is that it makes rotating other players through that slot for the odd half day off into an either/or choice. For example, if the Red Sox want to DH Kevin Youkilis in the dog days of August (presuming he's not injured), that means sitting David Ortiz. If the Yankees want to DH Mark Teixeira or Robinson Cano to give them a breather while keeping their bats in the lineup, that's going to mean sitting A-Rod, unless you're asking him to take the field for a rare cameo which would in turn sit Jeter. The issue isn't in resting the Captain, it's that his fill-in isn't likely to improve his fielding as a full-time DH; his skills are more likely to erode.

Perhaps the biggest unknown in the whole equation is the catching situation. As we saw this year, the 38-year-old Posada can still hit pretty well when healthy, but his fielding has become an outright liability. Similarly, the line on young Montero is that while his bat is impressive, his glove is a question mark as well. The scouts that Madden quotes note that the latter's defense and his handling of pitchers both leave much to be desired at this stage, and question whether he'll ever get there. One notes that he's far behind fellow catching prospect Austin Romine, whose skillset is more traditionally balanced — a good glove man with potential pop, but hardly an elite hitting prospect like Montero. Madden even theorizes that Montero could be dealt for pitching once Romine develops.

As it is, the blueprint for 2011 calls for Montero and Posada to share both the catching and primary DH duties, though that could be a hair-raising proposition unless the Yankees can also carry a defensively capable third backstop, i.e., one not named Francisco Cervelli. If Posada is out of the picture in 2012 — and here it's somewhat difficult to imagine the Yankees letting him go if he can still hit — a Montero/Romine combo would at least provide players with complementary skill sets, but getting both into the lineup would force the issue I raised above, meaning that it would be Rodriguez who sits.

So basically, assuming all goes according to plan with Jeter's contract negotiations this winter, the net effect of this plan beyond 2011 would be to add Nuñez's weak stick to the lineup to replace the production of catcher/DH Posada, while not substantially upgrading the defense either on the left side of the infield or behind the plate. That doesn't sound particularly appealing, does it? Unfortunately, it's a hazard that comes with the territory of working around so many irresistible forces (age-related decline and the relentless pressure to win in New York being two of the key ones) and immovable objects (the contracts of Rodriguez, Teixeira, Jeter and Posada).

Still, as blueprints go, this is probably the path the Yankees will take, simply because it's the most conventional one. Sentiment aside, there will be less resistance to letting a 40-year-old catcher depart or retire, shifting a 35-year-old to DH, and moving another aging infielder to an easier position than there would be to attempt a more radical solution — Jeter to left field, say. The key for the Yankees is to do a better job of finding their next shortstop via trade or free agency rather than simply going with the guy who happens to be playing the position at Triple-A. As if the job of filling Jeter's shoes weren't already hard enough.