A Glove Story of Biblical Proportions

Share All sharing options for: A Glove Story of Biblical Proportions 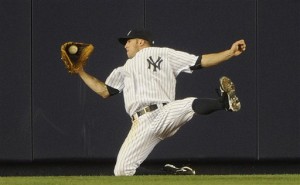 Brett Gardner shows off an example of his award-winning defensive work (AP).

Congratulations are in order to Brett Gardner, who was announced as one of the winners of a Fielding Bible Award, recognizing him as the best defensive left fielder in the majors. Voted upon by a panel of experts such as Bill James, Rob Neyer, Joe Posnanski, Peter Gammons, John Dewan (the inventor of the Plus/Minus fielding evaluation system and the founder of Baseball Information Solutions, whose data drives both that metric and Ultimate Zone Rating) and others, the Fielding Bible Awards are an offshoot of the Fielding Bible books, which offer better metrics for judging defense than errors and fielding percentage. Think of them as the sabermetrically savvy answer to the Gold Glove awards, albeit with a couple of key differences.

First, the voters presumably have more than a passing familiarity with advanced defensive metrics than do the managers who cast the Gold Glove ballots largely by relying upon reputation and Ye Olde Eyeball Test while occasionally failing to do something as basic as check how many games a guy played in the field (see Rafael Palmeiro vs. Tino Martinez, 1999) . While the voting results don't mesh perfectly with the rankings of any of the major systems — Plus/Minus, UZR, FRAA, Total Zone — the bet is that such numbers will match up better with the Fielding Bible Awards than with the Gold Gloves.

Second, only one awarded is granted at each position, instead of one for each league. The stated goal of the awards is to identify the single best player at each position in the majors for a given year. Though such a mission is somewhat folly given the uncertainties of subjective opinion and small sample sizes, the system is designed to produce at least some kind of consensus, as each of the 10 voters ranks 10 players at each position, with points awarded in a 10-9-8-etc. fashion, and the voting results are thus transparent.

Gardner, who shifted over from center field upon the offseason acquisition of Curtis Granderson, is the first Yankee to win a Fielding Bible Award in the honor's five-year history. "The judges recognized his speed and skill in covering the spacious left-field territory in the Yankees new stadium," notes the official announcement. Here's how the 2010 team stacks up, with some notes on the various Yankee candidates:

C: Yadier Molina, Cardinals. His fourth fourth straight win. Not surprisingly, nobody on the Yankees received a single vote here, not Jorge Posada, not Francisco Cervelli, not Yogi Berra, and not Yogi Bear.

2B: Chase Utley, Phillies. Surprisingly, his first win, though he had the highest Plus/Minus by a mile at the position over the 2006-2008 span. Robinson Cano placed just sixth, behind Utley, Orlando Hudson, Mark Ellis, Brandon Phillips and Sean Rodriguez. Nobody ranked Cano first; Richman and the BIS video scouts were the only ones even to have Cano in their top three.

SS: Troy Tulowitzki, Rockies. His second award. Twenty shortstops received at least one vote. Derek Jeter was not one of them.

3B: Evan Longoria, Rays. Beat out Ryan Zimmerman by a bare point at the most closely contested posittion. Alex Rodriguez got a total of two points in the voting, tying him for 15th.

LF: Brett Gardner, Yankees. This was considered the FBA's biggest upset in that Gardner beat out three-time winner Carl Crawford. Every ballot had him either first or second, while Crawford was ranked as low as fifth on one ballot (James) and seventh on another (Gammons), finished second, and former Yankee farmhand Jose Tabata, a rookie for the Pirates, ranked third.

CF: Michael Bourn, Astros. Despite missing significant time due to injury, Bourn ran away with this by a wide margin. Curtis Granderson placed eighth; Tigers rookie Austin Jackson, who took the outbound on the deal which brought Granderson to New York, placed fourth, placing on the top three on half the ballots, but left off of one and 10th on another.

RF: Ichiro Suzuki, Mariners. His third career win and second in a row. No love for Nick Swisher among the 20 players receiving votes.

P: Mark Buehrle, White Sox. Another repeat winner from 2009. The ability to control the running game is among the criteria here, and Buehrle allowed just six steals in 12 attempts while picking off six additional baserunners. Andy Pettitte, who was even better at eliminating the running game (two steals in three attempts!) received enough votes to rank 16th, but he wasn't the top Yankee to place; Javier Vazquez (four steals in eight attempts) tied for 14th.

Elsewhere in the Headlines

• While former pitching coach Dave Eiland is now looking for work — and refuting a previously published report that clashes with manager Joe Girardi are what led to his dismissal — hitting coach Kevin Long has agreed to a three-year extension. It's a well-earned one in these eyes. While the aging core of Jeter, Rodriguez, and Posada all had career-worst years, the Yankees still led the majors in runs scored and on-base percentage while ranking second in walks and third in homers. Robinson Cano emerged as a legitimate MVP candidate thanks in part to Long's swing-doctoring efforts. Long also helped remake the swings of Nick Swisher (late 2009) and Curtis Granderson (mid-2010), and the work he did with Jeter late in the year did appear to have some positive effect.

• Winning the award for the statement most likely to get a baseball executive beaten up in the Bronx since Red Sox president Larry Lucchino called them "the evil empire," Rangers owner Chuck Greenberg criticized Yankee fans for their conduct in the ALCS: "I thought Yankee fans, frankly, were awful. They were either violent or apathetic, neither of which is good. So I thought Yankee fans were by far the worst of any I've seen in the postseason. I thought they were an embarrassment."

Meh. Such "news" likely has everything to do with an attempt to reinforce the narrative around Mrs. Cliff Lee's complaints about being harassed during the series in the interest of the upcoming free agent fray surrounding her husband. In addition to blatantly currying the favor of his franchise's fan base, Greenberg is slagging on the fan base of a team which might welcome him with open arms later this winter, thus casting Lee as the villain if he chooses to embrace such heathen thugs.

Still, money talks and bull manure walks, and it matters far less what the Rangers' owner says now than what his checkbook says later. Until then, Greenberg's attention-getting chest-beating is worth exactly the weight of the collective Bronx cheer Yankee fans can offer as a rebuttal. So all together now: PPPPPFFFFFFFFFFFFTTTTTTHHHHH!