Share All sharing options for: Anatomy of an At-Bat: Lance Berkman's go-ahead double

From an offensive standpoint, Game 2 was about Lance Berkman, who went 2-4 with a double, a homer and two RBI.

His opposite field double in the seventh scored Jorge Posada all the way from first base and gave the Yankees a lead they would never relinquish.

A variety of factors came into play, but it ultimately boiled down to one thing: Carl Pavano went to the "changeup well" one too many times.

1. In Berkman's first AB, Pavano retired him on a good, outside changeup that he rolled over. In his next AB, Pavano fell behind 2-0 and tried to get him to roll over again... only Berkman had adjusted and rocketed the changuep over the left-centerfield wall (Pavano also got more of the plate, being behind in the count). In the third and pivotal AB, with Posada on first, the American Idle went to the changeup again on 2-2, again missed his spot (maybe he didn't want to risk going full and a potential walk to put a runner into scoring position), and again Berkman smashed it to left-center.

It's hard to blame Pavano - his changeup is far and away his best pitch, and has been throughout his career. He didn't throw it to Berkman more than once in any AB, but he should have realized Berkman had adjusted and went with something else.

Only four of the 13 pitches Berkman saw were on the inner part of the plate, and he swung at none of them. Again, Pavano should have realized that not only was Berkman probably looking for a changeup, but also an outside one, which is what he got.

2. I'll admit it right now: The 1-2 inside fastball was probably a strike. (Pitch 4 below) 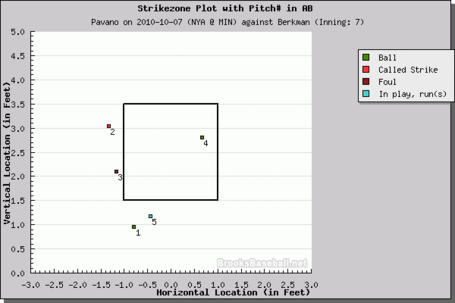 However, pitch 2, that was called a strike, was probably a ball, so those bad calls even out somewhat. Anyway, that was a huge pitch. Pavano had tried to retire Berkman inside, missed, and had to settle on his 'out pitch' once more.

3. Just like Curtis Granderson's triple in Game 1, Berkman's double was preceded by a long AB from the leadoff hitter that inning. Posada drew a six-pitch walk that added to Pavano's pitch count and also inclined him not to walk the next batter. Berkman was the recipient of that.

4. Another factor is merely that Lance Berkman is a better hitter than we've seen, and he may be regressing to his mean at just the right time. His career OPS+ is 145 - with the Yankees it was 91. Last year it was 140; I don't believe he would decline that fast in a single season.

5. We know Big Puma wasn't hitting lefties this year (.517 OPS), but he was still a force against righties (.847). Ron Gardenhire chose to keep the righty Pavano in the game (who fares better against same-handed batters) instead of using the southpaw Jose Mijares (where Girardi probably would've pinch-hit Thames, forcing Gardenhire to possibly burn Mijares for a new RHP). Which is the better matchup: Berkman vs. a tiring Pavano or Thames vs. Mijares?