Puttin' On The Leyritz?

Share All sharing options for: Puttin' On The Leyritz? 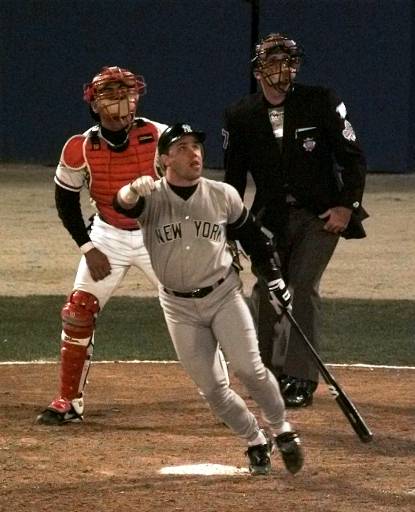 Given tonight's pitching matchup, the Rangers might need one of these to tie the World Series tonight. (AP)

The Rangers stuck to the 1996 Yankees' script last night, salvaging their series with a Game 3 win behind a strong start from David Cone stand-in Colby Lewis. With Tommy Hunter going against Madison Bumgarner tonight, they'll likely need someone to make like Jim Leyritz in the later innings. As for all the scuttlebut regarding Ron Washington's decision to start Hunter rather than Cliff Lee on short rest tonight, I actually side with Washington on this one:

My two main reasons have nothing to do with Cliff Lee. Though Lee has never started on three days' rest in his major league career, I have little doubt in his ability to do so. However, if the idea is to replace Hunter with Lee in the rotation, then bring Lee back for Game 7, that would require C.J. Wilson and Colby Lewis to pitch on three days' rest in Games 5 and 6, respectively. That's a no-go due to the blister on the middle finger of Wilson's pitching hand, which ripped open in each of his last two starts.

With Wilson needing full rest, starting Lee in Game 4 would mean dropping Wilson from the rotation while simply pushing Hunter back a day to face Tim Lincecum. Another way to look at it is that the real change to the rotation would be replacing Wilson and Lee on full rest with two starts of Lee on short rest. Given that Wilson's Game 2 start was far stronger than Lee's Game 1 outing, that seems misguided. Similarly, Colby Lewis has been fantastic in his last two postseason starts and is lined up for Game 7. Right now, I'd rather have a fully-rested Lewis in Game 7 than Lee pitching on short rest for the second time in a row.

If anything, there is a better argument for Giants manager Bruce Bochy to start Lincecum on short rest on Sunday. Jonathan Sanchez, who is currently lined up for Game 7, has struggled in each of his last two starts, including Saturday night's loss in Game 3, and has seen his velocity dip, which pitching coach Dave Righetti thinks might be evidence of fatigue, given that Sanchez has now thrown 50 innings more than he did in 2009. Starting Lincecum in Game 4 would enable the Freak to come back for Game 7 at home against Lewis. Of course, with his team in good position to take a 3-1 lead in the Series, Bochy can be forgiven if he doesn't want to mess with his ace over concerns about Game 7.

You can read the rest of my Game 4 preview over on SI.com.