Déjà Vu All Over Again?

Share All sharing options for: Déjà Vu All Over Again? 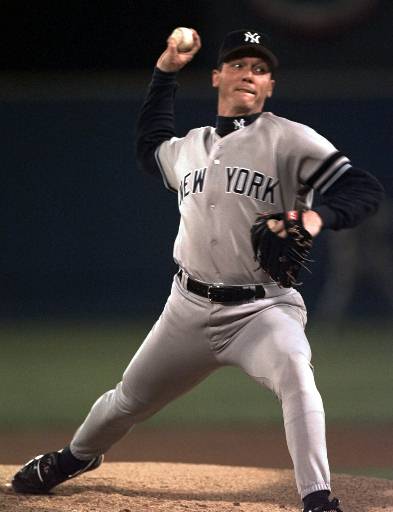 Can Colby Lewis be the Rangers' David Cone tonight? (AP)

The World Series resumes tonight with Game 3 in Arlington. The first two games in San Francisco were even more lopsided than the scores suggested, but the Rangers might be able to find inspiration from a familiar source (from my Game 3 preview on SI.com):

The Rangers come home trailing 2-0 in this Series due to a near-total collapse in the first two games in San Francisco. Yes, they scored seven runs in Game 1, but five of those came after they were down 8-2, and as a team they are hitting just .227/.293/.303. Only Bengie Molina and Mitch Moreland have had multi-hit games, both doing so in Game 1, and Ian Kinsler is the only other Ranger with more than one hit in the series. Josh Hamilton and Nelson Cruz, the team's leading hitters in the ALCS and regular season, are a combined 2 for 17, and though Kinsler came close with his Game 2 double, the Rangers are homerless in the Series. C.J. Wilson was fantastic for six innings in Game 2, but a reoccurrence of his blister problems forced him from the game in the seventh. Cliff Lee was lit up in Game 1 and the Rangers bullpen has allowed 11 runs in 7 1/3 innings, 14 runs if you include the inherited runners they have allowed to score.

Of the 51 teams that have fallen behind 0-2 in the World Series, only 11 have come back to win. The last club to do so was the 1996 Yankees, and they offer some encouragement for the Rangers. Texas was outscored 20-7 in the first two games, but the Yankees were outscored 16-1 at home in Games 1 and 2 of the 1996 fall classic, but turned the Series around on the road against a Braves rotation even better than that of this years' Giants.

David Cone got the Yankees back on track in Game 3 in 1996, holding the line against Tom Glavine despite being out-pitched by the future Hall of Famer. The Yankees then jumped all over Greg McMichael in the eighth and the comeback was on. Can Colby Lewis be the Rangers' David Cone tonight pitching at home against a lesser lefty with better stuff, or will they fall behind 0-3, forcing them to look for inspiration from a Yankee opponent instead?